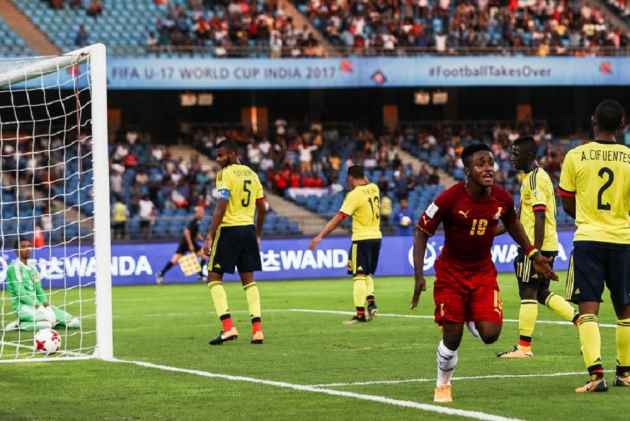 Twice champions Ghana opened their FIFA Under-17 World Cup campaign on a winning note, beating Colombia 1-0 in a Group A match at the iconic Jawaharlal Nehru Stadium in New Delhi on Friday evening.

The ‘Black Starlets’, who clinched the under-17 World Cup in 1991 and 1995, won through a 39th-minute superb goal by midfielder Sadiq Ibrahim, though both teams looked almost equal throughout the 90 minutes under the bright floodlights. Ghana collected three points from the win.

Later in the evening, India were to play the USA in their World Cup debut match.

In the Ghana-Colombia match, both teams made almost equal forays into the opponents’ half. The first exciting moment of the match came in the 28th minute when the 166-cm tall Ibrahim put the ball into the net but was adjudged off-side.

Eleven minutes, however, Ibrahim was bang on target as he, on an accurate pass from captain Eric Ayiah from the edge of the left field, beat the goalkeeper and put the ball past him and into the net to give his team a 1-0 lead.

In the second half, Colombia got a golden opportunity to equalise in the 80th minute but Deiber Caicedo missed the chance. On receiving a pass, he moved into the area from his right and with the only goalkeeper to beat the shot wide of Danlad Ibrahim’s right.

In all, Ghana have reached four out of five World Cup finals and finished third in the 1999 edition. Lately, however, they have not been consistent, barring a semi-final appearance in 2007.

This is Colombia’s sixth appearance at the U-17 World Cup and their first since 2009, when they finished third and matched their previous best performance at the tournament, going back to 2003.

In their other appearances, Los Cafeteros reached the Round of 16 in 2007 at Korea Republic while crashed out at the group stage in 1989 in Scotland and in 1993 in Japan.