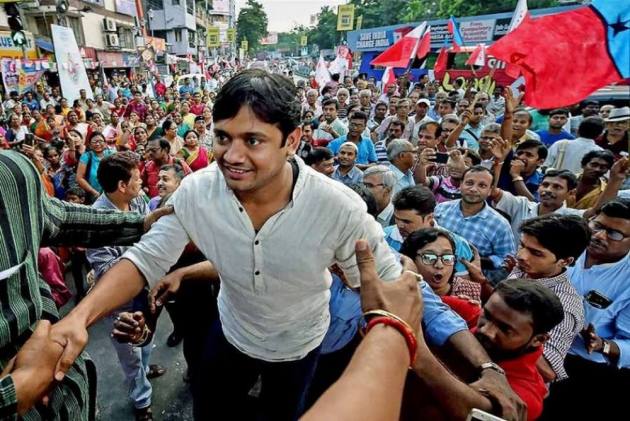 He is likely to have the support of grand alliance partners RJD, Congress, NCP and Jitan Ram Manjhi's HAM(S).

"If the party (CPI) decides to nominate me as its candidate from Begusarai and other grand alliance partners also extend their support, then I don't have any objection to it," Kumar told PTI.

He, however, said no formal talks have taken place either at party or alliance partners' level with regard to sharing of seats.

A resident of Barauni block in Begusarai district, Kumar's mother is an anganwadi worker and his father is a farmer.

Asked if he will still contest the election if CPI decides to go alone in 2019 general elections, Kumar said, "Alliance is a certainty and party will not go it alone in elections. CPI's party congress has passed a resolution under which it would work and coordinate in forming a grand alliance of which CPI will certainly be a part," he said.

Sources said Kumar, 31, will be CPI nominee from Begusarai and all other partners of grand alliance such as RJD, Congress, NCP, HAM(S) and Left parties would extend support to him.

CPI officials said RJD chief Lalu Prasad has given his consent in this regard.

Stating that Prasad has given his consent for leaving a seat for Kumar, Singh said, "During our talks held on earlier occasions, Prasad had agreed to leave a seat for him."

Singh also said his party has decided to contest six Lok Sabha seats in Bihar but a final decision would be taken after talks over seat-sharing with all like-minded parties.

The six seats on which the party intends to field its candidates are Begusarai, Madhubani, Motihari, Khagaria, Gaya and Banka.

The CPI leader said Kumar has agreed to contest election from Begusarai.

CPI candidate Rajendra Prasad Singh, who was also CPI state secretary then, contested from Begusarai in 2014 in alliance with JD(U) and secured third position.

An RJD leader, preferring anonymity, said there is a broad consensus among grand alliance partners and Left parties that there should be a joint candidate to defeat BJP and its allies in 2019 polls, but discussions have not started on seat sharing so far.

"Parties will name their candidates once seats are allocated to them but that has not taken place so far," he said.