The Singh brothers have jointly tendered their resignation to the Board of Fortis Healthcare, which will discuss it in the meeting on February 13, the company said in a filing to the BSE. 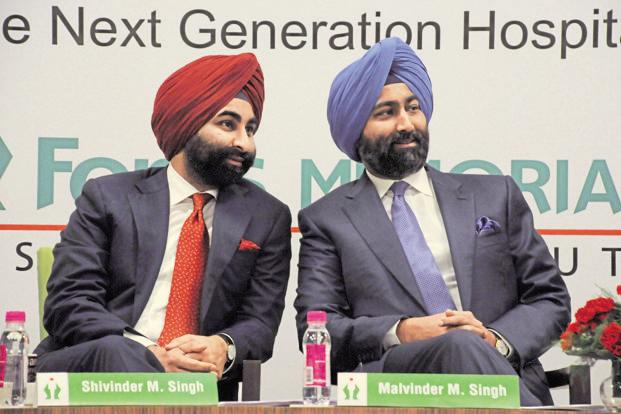 The Singh brothers have jointly tendered their resignation to the Board of Fortis Healthcare, which will discuss it in the meeting on February 13, the company said in a filing to the BSE.

The resignation is intended to free the organisation from any encumbrances that may be linked to the promoters, the letter said.

"In light of the recent High Court judgement upholding the plea of Daiichi Sankyo to enforce the arbitration award, we believe this is in the interest of propriety and good governance," it said.

The Delhi High Court had on January 31 upheld an international arbitral award of Rs 3,500 crore passed in favour of Japanese pharma major Daiichi Sankyo, which has alleged that the former promoters of India's Ranbaxy Laboratories had concealed information about proceedings against them by American food and drug department.

A tribunal in Singapore had passed the verdict in favour of Daiichi holding that the former Ranbaxy promoters and brothers, Malvinder Singh and Shivinder Singh, had concealed information that the Indian company was facing probe by the US Food and Drug Administration and the Department of Justice, while selling its shares.

With the resignation of the promoters, the board will be "better enabled and empowered to guide the future direction of the organisation without anyway being hampered by the Daiichi Sankyo judgement and our association at the Board," the letter said.

"The members of the board are also requested to look into all inter-group transactions and distance the promoter group from Fortis Healthcare Ltd in a manner that enables continuity of the operations of the organisation and deliver on its mission of enriching and saving lives," the Singh brothers wrote in the letter.

The high court order paved the way for enforcement of the 2016 arbitral award passed by the Singapore tribunal against the Singh brothers who had sold their shares in Ranbaxy to Daiichi in 2008 for Rs 9,576.1 crore. Sun Pharmaceuticals Ltd later acquired the company from Daiichi.

Daiichi had approached the high court in 2016 to seek the enforcement of a Rs 2,562 crore Singapore arbitral award passed in April 2016, along with an additional claim of interest and lawyers' fees incurred in connection with the proceedings.

The tribunal's award had come after the Japanese company invoked arbitration clause against Singhs alleging that they concealed important information while selling Ranbaxy in 2008.

Daiichi had entered into a settlement agreement with the US Department of Justice, agreeing to pay $500 million penalty to resolve potential, civil and criminal liability.

The company had then sold its stake in Ranbaxy to Sun Pharmaceuticals for Rs 22,679 crore in 2015.