French Elections: Rejection Of Le Pen, Not Victory Of Macron

Le Pen’s television debate against Macron came as the final nail in the coffin, which swayed the undecided vote. The two candidates have offered voters starkly different visions of France.

Emmanuel Macron, a complete outsider, at 39 is the next centrist President of France and as described by François Bayrou, an ex-minister and Macron’s centrist ally: “He is the youngest head of state on the planet”.  At 65.5% votes, Macron has reinvented socialism. France, for the first time, has elected a President without a party. He has given Europhiles reason to rejoice.

While Marine Le Pen at 34.5 % voteshas cause to be happy, as she has doubled the performance of her father, Jean-Marie Le Pen, against Chirac, and after the parliamentary elections in June, would, in all probability be a stronger voice and a credible opposition.

But voter apathy has stared in the face during this election, with a total destruction of the traditional political parties and voting beingmore than six points lower than the 72% recorded at the same time in 2012 and nearly 10 points down on the 75.1% of 2007.

In fact, it is lower than all the elections back to 1981. 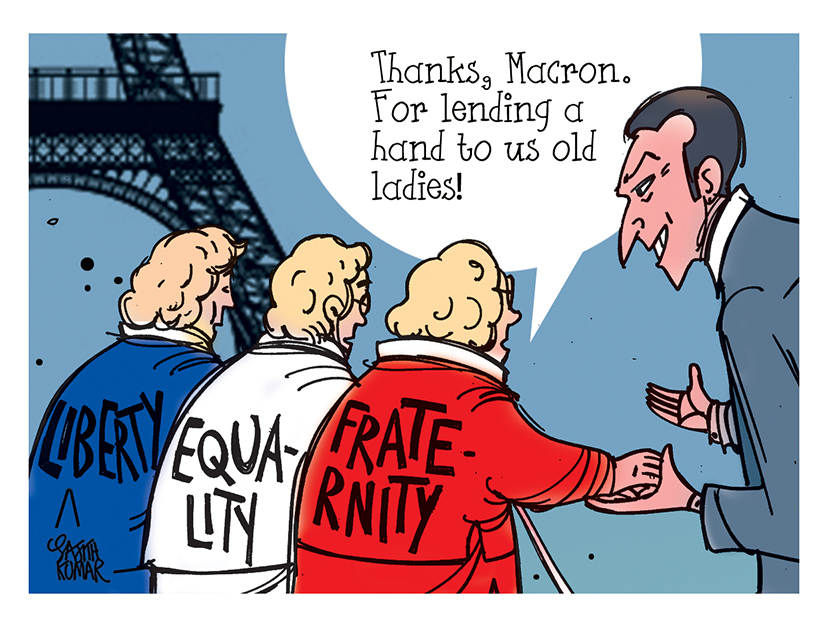 Le Pen’s television debate against Macron came as the final nail in the coffin, which swayed the undecided vote. The two candidates have offered voters starkly different visions of France.

This election also marks a new phase in French politics. For the first time, neither of the main parties - the Socialists and the Republicans - had a candidate in the run-off and came ahead of elections in Germany and the UK, and as Britain negotiates its exit from the EU.

This election is expected to bring about a new Franco-German alliance and push for a British interest to strike a better deal with the EU. Macron has always criticized the European Union "dysfunction" and called for "in-depth" reform.

Macron, a former economy minister who ran as a “neither left nor right” independent, promised to shake up the French political system but now that he is elected, the path ahead will not be easy. While far-left and far-right populism is increasing across Europe and his ministers will not be experienced politicians, in such turbulent times. He has never run for office himself except being an economy minister in Hollande’s cabinet before he decided to invent a new movement rejecting traditional politics.

In a political landscape with a strong hard left and far right, Macron faces the challenge of trying to win a parliamentary majority for his fledgling political movement En Marche! (On the Move) in legislative elections next month. Without a majority, he will not be able to carry out his manifesto promises. After all, 11 million people voted for Le Pen.

Le Pen, on her part has promised to renew her party and there are already speculations that Front National (FN) may take a different name. While swiftly conceding defeat she said she had won a “historic and massive” score which made her leader of “the biggest opposition force” in France, she vowed to radically overhaul her party. Her promise to “transform” her far-right movement, left open the possibility that the party could be expanded and renamed in an attempt to boost its electoral chances.

While France is seeing a total rejection of traditional politics and seeking something new and different, this election has seen a record number of people not voting. The victory was more about the rejection of Le Pen than a vote for Macron.

While, after the Brexit vote and the election of Donald Trump, the battle for the Elysee was the latest election to shake up establishment by throwing out the figures that epitomized status quo and mainstream politics the political novice Macron, who no one had heard of, has a big battle ahead. He resounds the victory of former British Prime Minister Tony Blair and the third way and we all know what happened to that?

As President, he comes without a parliamentary party behind him. After all, a President is only powerful if he can push through legislation, and the vote was against Le Pen, not for Macron. He needs to, but will he be able to unite a divided and disaffected France?