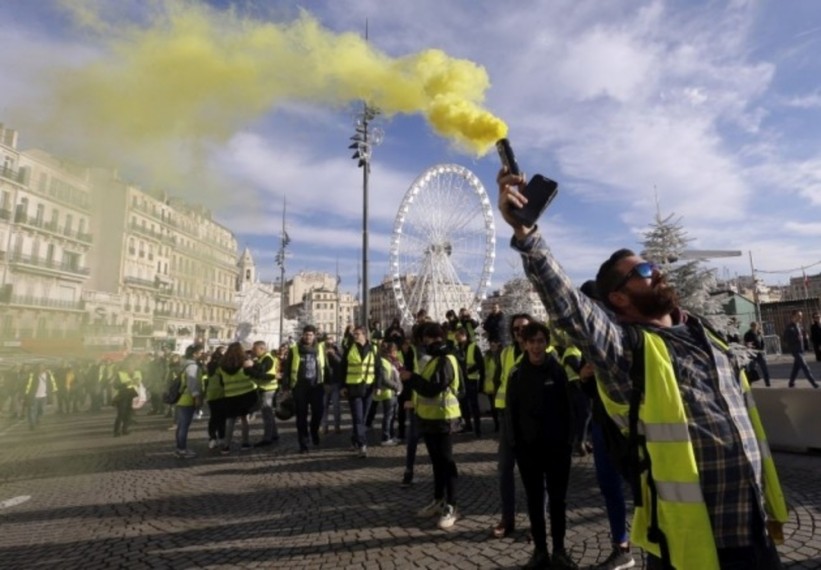 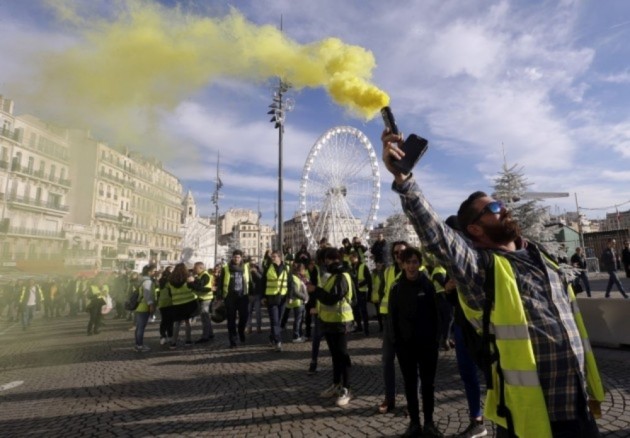 Following a crisis meeting by French President Emmanuel Macron on Sunday this talk was held. Philippe has been asked to meet protest organisers and party leaders as part of a "constant wish for dialogue," the Elysee Palace said.

Environment Minister Francois de Rugy met representatives of the so-called "yellow vest" protesters last week but failed to convince them to end the demonstrations that have taken place over the last two weeks.

The government has not ruled out imposing a state of emergency to combat the protests, which began over fuel taxes but have morphed into a broad opposition front to Macron, 40, a pro-business centrist elected in May 2017.

The president on Sunday assessed the damage at the Arc de Triomphe, the massive monument to France's war dead at the top of the Champs-Elysees avenue, where rioters scrawled graffiti and ransacked the ticketing and reception areas.

Inside, rioters smashed in the iconic face of a sculpture, a partial reproduction of the frieze "La Marseillaise" by Francois Rude.

Macron also saw the wreckage of burnt-out cars and damaged buildings from rioting at other sites, where he praised the police but was also booed by sections of the crowd.

Paris police said 412 people were arrested on Saturday during the worst clashes for years in the capital and 378 remained in custody.

Paris police chief Michel Delpuech said the violence had been "on a level not seen in decades." A total of 263 people were injured nationwide, including 133 in the capital, 23 of them members of the security forces.

"I will never accept violence," Macron said. "No cause justifies that authorities are attacked, that businesses are plundered, that passers-by or journalists are threatened or that the Arc du Triomphe is defiled."

"Our worst fears have been confirmed: this is the third consecutive weekend of (protest) blockades which amounts to a major loss for the whole business community," Jacques Creyssel, representative of a federation of retail businesses, told AFP.

Three people have died in incidents linked to the anti-government protests, which were sparked initially by a rise in taxes on diesel.

In Paris on Sunday as groups of workers set about cleaning up the mess from the previous day, the scale of the destruction became clear.

Around famous areas including the Champs-Elysees, the Louvre museum, the Opera and Place Vendome, smashed shop windows, broken glass and the occasional burnt-out car were testament to the violence.

Dozens of cars were torched by the gangs of rioters, some of whom wore gas masks and ski goggles to lessen the effects of police tear gas.

One person was in a critical condition after protesters pulled down one of the huge iron gates of the Tuileries garden by the Louvre, crushing several people.

Nearly 190 fires were put out and six buildings were set alight, the interior ministry said.

Graffiti was daubed at the Arc de Triomphe, with one slogan saying: "The yellow vests will win."

Some 136,000 people joined demonstrations nationwide on Saturday, most of them peaceful, the interior ministry said.

The figure was well below the first day of protests on November 17, which attracted around 282,000 people, and also down on the revised figure of 166,000 who turned out last Saturday.

Referring to the possibility of imposing a state of emergency -- a demand made by the police union Alliance -- Castaner declared: "Nothing is taboo for me. I am prepared to examine everything."

Macron faces a dilemma over how to respond, not least because the "yellow vests" are a grassroots movement with no formal leaders and a wide range of demands.

"We have said that we won't change course. Because the course is good," government spokesman Benjamin Griveaux told BFM television defiantly on Sunday morning.

Jacline Mouraud, one of the protest movement's prime instigators over social media forums, told AFP that scrapping the fuel tax was a "prerequisite for any discussion" with the government.

Macron insists the taxes are needed to fund the country's transition to a low-emission economy.