A national hero in his home country and crowned the best player on the planet, Modric was rewarded for his key role in Croatia's historic run to the World Cup final and his club Real Madrid's third straight Champions League trophy. 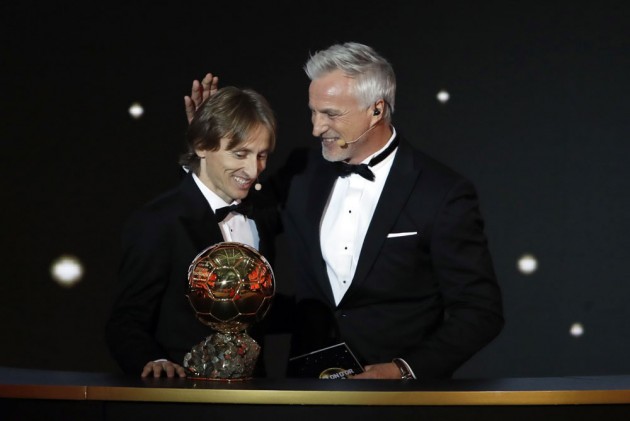 Luka Modric's journey from Croatian war child to the world's best footballer was celebrated when the Real Madrid midfielder hoisted the Ballon d'Or.

A national hero in his home country and crowned the best player on the planet, Modric was rewarded for his key role in Croatia's historic run to the World Cup final and his club Real Madrid's third straight Champions League trophy.

"It's a unique feeling. I'm happy, proud and honoured," said Modric, who also won the FIFA Player of the Year award in September.

Ballon d'Or Winner Leaked, And We Have A First-Time Winner

What Are Ballon d'Or And FIFA Best Awards?

The star-studded Paris ceremony could hardly be further removed from Modric's early years as a child refugee, fleeing the burned-out shell of a remote Croatian cottage where he spent part of his childhood.

Hidden in the folds of Velebit mountain, with the nearest neighbours several kilometres away, trees now grow inside the roofless ruin and a sign warns of "Mines - Keep out!"

The player's grandfather, also named Luka, lived in the house, lying on a mountain road winding through the Modrici hamlet.

His grandfather was killed by Serb forces, the house was burned and the family fled to the coastal town of Zadar, some 40 kilometres (19 miles) away.

It was there that Modric, born in 1985, began his footballing odyssey, drawing attention for the first time to his budding abilities.

"I heard about a little hyperactive boy constantly playing with a football in the corridor of a refugee hotel, even going to sleep with it," said Josip Bajlo, who was then coach at the First Division club NK Zadar.

As soon as Bajlo saw Modric play he signed him up for the club's football school, where he immediately stood out.

"He was an idol to his generation, a leader, a favourite," Bajlo told AFP earlier this year.

The 1991-1995 war with Serb rebels, during which Zadar and the surrounding region were heavily shelled, toughened Modric, according to those close to him.

"It happened a million times that we were going to training as the shells were falling, and we were running to shelters," said childhood friend Marijan Buljat, who trained and played with Modric while growing up.

Modric left Zadar, where he remains a legend, for Dinamo Zagreb in 2000 and then joined English Premier League club Tottenham Hotspur in 2008.

After a bidding war, he was snapped up by Real Madrid in 2012.

But his popularity in Croatia and his image as a modest family man was tarnished by his testimony last year during the multi-million-euro corruption trial of former Dinamo Zagreb chief Zdravko Mamic.

Modric's testimony supported Mamic's case against allegations of corruption, angering many fans who saw the trial as a chance to clean up the corruption-ridden sport.

Prosecutors eventually charged Modric in March for giving false evidence but dropped the case on Monday due to a lack evidence.

Any lingering anger against Modric had evaporated long ago, however, after he brilliantly inspired Croatia to their first World Cup final last summer.

Despite the 4-2 defeat by France, more than 500,000 people gave captain Modric and his team a heroic welcome on their return to Zagreb.