From 'Dabbawalas' To Students, How Mumbaikars Help Thousands Of Protesting Farmers

More than 35,000 farmers reached Mumbai's Sion on Sunday night and by 5am on Monday morning, they reached their final destination - Azan Maidan. 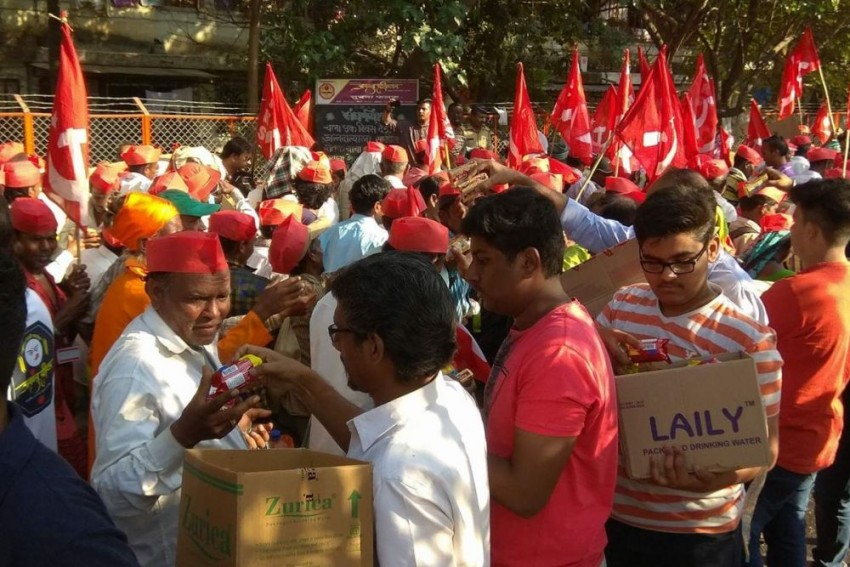 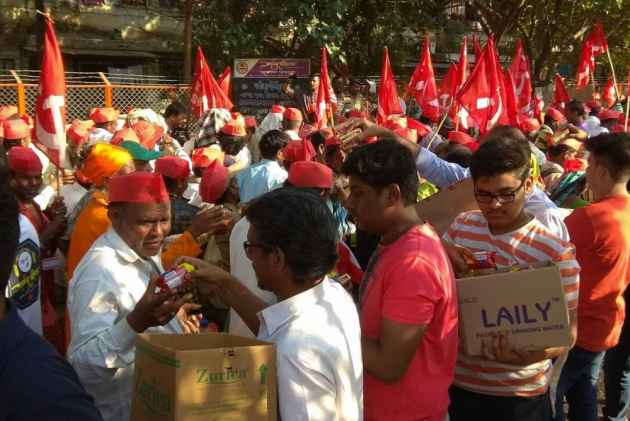 outlookindia.com
2018-03-12T16:19:39+05:30
Azad Maidan in south Mumbai turned into a sea of red on Monday morning as thousands of farmers, carrying red flags, converged in Mumbai after walking around 180 kilometres under blazing sun over the last six days.
More than 35,000 farmers reached Mumbai's Sion on Sunday night and by 5am on Monday morning, they reached their final destination - Azan Maidan. The protesters walked in the middle of the night on service roads to not cause any inconvenience to the class 10 board exam students.
This graceful gesture has won people's hearts, and Maharashtra chief Minister Devendra Fadnavis on Monday lauded the protesting farmers for maintaining discipline during the protest in Mumbai.
Many NGOs and social workers from across religions have come forward to provide water and food to these farmers. The famed 'dabbawalas' of Mumbai and the city residents also came out to help the thousands of farmers.
Subhash Talekar, the spokesperson of Mumbai Dabbawala Association, said, "We thought about helping the farmers with food as they are our food-providers and have come from remote parts of the state."
"We asked our men working between Dadar (in Central Mumbai) and Colaba (South Mumnbai) to collect food and deliver it to our farmer brothers at the Azad Maidan," he said. Dabbawalas, the tiffin-carriers known for their efficient delivery service, provided food to the protesters as a part of their 'roti-bank' initiative.
According to Talekar, the Mumbai roti-bank, of which the dabbawalas are an integral part, deploys GPS-tracked vans to collect excess food from eateries, hotels, public functions and households, so that it can be distributed to the poor and hungry people.
Meanwhile, city residents were also seen offering 'Vada-pav' (a popular street snack), other food items and water to farmers on Sunday night. Several political parties like the Congress, the NCP, the Shiv Sena and the Maharashtra Navnirman Sena have extended their support to the protesting farmers.
On social media, people shared pictures of the bleeding legs of farmers and videos of senior citizens and women marching from Nashik to Mumbai. From actors to businessmen, Mumbaikars are extending their support to the protesting farmers.

our Kisan, our Life, our Food, our Kids, our Country.....#KisanLongMarch #photography #Farmers #Mumbai @ANI @reuterspictures pic.twitter.com/BQbCos9WxL

The Times of India reported that the farmers strode into Thane on Saturday night, residents flocked to the streets to interact with them, some eagerly clicking selfies with them and others offering food grains and footwear.
The Thane Matadata Jagran Manch provided nearly 500kg of food grains to the farmers who camped for the night at BMC octroi ground.
Another group, through a social messaging app, mobilized footwear for the farmers after reading about their blistered feet, the ToI report added.
Here is how social workers are helping the farmers:

Amazing to see people come out with food, water and moral support for thousands of protesting farmers who walked 180 km to reach Mumbai. pic.twitter.com/xtNruRQ8Fa

All sections of #Mumbai are supporting the #KisanLongMarch
Farmer brothers & sisters got a warm welcome from Mumbai‘s Sikhs. The Sikh community in Mumbai served water & distributed food to farmers participating in the historic march! pic.twitter.com/SDu2bSWYuS @JarnailSinghAAP

#KisanLongMarch gets a warm welcome from Mumbai citizens. We are distributing food and water. We support our distressed #farmers @milinddeora @BDUTT pic.twitter.com/vqy9K8Pufh

The government had anticipated cooperation from the participants of the march for a smooth functioning of the traffic on March 12, as it is Monday and exams of the 12th and 10th board are also scheduled for the day.
Members of the All India Kisan Sabha (AIKS), the farmers' wing of Communist Party of India-Marxist (CPM), along with other farmers’ unions are the ones holding the protest march, which launched from Nashik last Tuesday. The farmers are scheduled to gherao the Maharashtra Assembly later on Monday. They also demand Minimum Support Prices to be fixed as per Swaminathan Commission recommendations - according to which they should be paid one-and-a-half times the cost of production.
(With PTI inputs)
For in-depth, objective and more importantly balanced journalism, Click here to subscribe to Outlook Magazine