From Inches To Miles

With Modi and Xi, considered as two very ‘strong leaders’ in their respective countries, India and China may surprise many of the sceptics by breaking new ground to flag off a new relationship 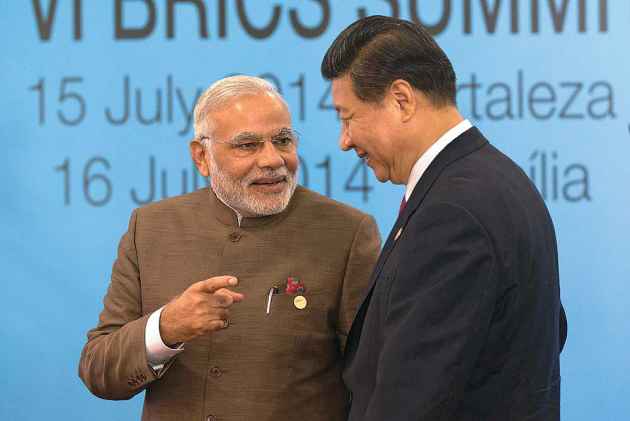 Managing relations with China has been one of the biggest diplomatic challenges for successive Indian governments. It also poses a big challenge for the Narendra Modi government. An indication of how well it manages to do that will become clear by the end of the three-day official visit of the Chinese President, Xi jinping, to India which begins tomorrow, September 17, 2014.

India’s relations with the outside world, which includes developing close ties with its immediate neighbours as well as the major players at the international stage, have been accorded top priority by the Narendra Modi government from the time it came to power in Delhi in May this year. The past months saw Prime Minister Modi and his cabinet colleagues engage with various countries in Asia and elsewhere, both bilaterally and at a number of regional forums. Amidst all this hectic diplomatic engagement, however, the visit of the Chinese President is being given top billing by South Block mandarins.

There are several reasons for it.

China is not only the second largest economy in the world, it also sits on a trillion dollar worth of foreign exchange reserve and is looking for opportunity to invest in emerging markets—India surely fancies itself as one such market. With its growing military and political clout both at the regional as well as global stage, China is also widely acknowledged today as a rising power that can seriously challenge the pre-eminent position enjoyed by the United States internationally. Importantly, China is India’s largest neighbour and one of its top trading partners.

But Sino-Indian relations have also gone through several ups and downs in the past seven decades. There have been phases of bonhomie and cordiality as well as long spells of hostility and cold indifference between the two sides.

Many in India continue to see the emerging Sino-Indian relations through the prism of their past differences, culminating in a war and a humiliating drubbing for the Indian troops at the hands of the Chinese soldiers in the winter of 1962. This feeling among sections of Indians has been carefully nurtured by China-baiters, both within and outside the country.

In the present context China’s rise as a global power has to be seen with the simultaneous rise of India. Their rise within the same geographical space has led to occasional “brush offs” between the two neighbours but deft handling by the political leadership in the two countries has not allowed the tensions to reach a tipping point.

Though the disputed boundary between the two sides remains unsettled till date, it has not seen any major flare-ups so far. Reports of occasional “intrusions” by troops of the two sides into territories claimed by both countries notwithstanding, the unresolved boundary has remained by and large peaceful.

But the Chinese President’s visit to India also comes at a time when China’s rise and assertive claims over important sea lanes and islands along the Indo-Pacific have raised concerns among a host of countries in East and Southeast Asia.

Prime Minister Modi’s extremely successful visit to Japan and the leaders of India and Japan’s emphasis for a rule-based structure for the freedom of navigation for all countries through these important waterways, gather special salience. This has led some sections in India to hope that a time has perhaps come when India should join others to curb the rise of an assertive China.

Modi’s predecessors in Delhi had managed to improve relations with all major powers in Asia, expanding India’s options without getting into any alliance with an individual or group of countries against others. Hardliners within the ruling party, however, feel the success in Japan should allow India to choose developing and strengthening ties with countries in the region to isolate China. If that happens, it will be seen as a major shift from the policy successive governments in Delhi have been pursuing for the past 15 years. So will Modi abandon the past policy of his predecessors in dealing with China?

So far Narendra Modi has given no such indication that he is willing to abandon the past policy to satisfy those who call for isolation of China. Instead, he has given every indication to ensure that the Chinese President’s visit to India also ends in a resounding success as was his own visit to Japan.

To ensure that the Indian people realize the high value and honour being accorded by the government to President Xi, the Prime Minister has decided to fly down to Ahmedabad to receive the Chinese President. To mark the special occasion, he is also hosting a private dinner for him there, which will be followed by an official lunch by him in Delhi on Thursday and a banquet at the Rashtrapati Bhawan by President Pranab Mukherjee. Besides a host of other Indian leaders, both from the ruling BJP as well as the Opposition will also meet the Chinese President to make it clear that Delhi accords top priority to its relations with Beijing.

Interacted with Chinese journalists. I shared- India & China are bound by history, connected by culture & inspired by rich traditions.

If I have to describe potential of India-China ties I will say- INCH (India & China) towards MILES (Millennium of Exceptional Synergy)!

Arithmetically, when India & China gain, a significant percentage of world's population gains. But, our relation is beyond plain arithmetic.

Xi has been to India many years back as the party secretary of one of China’s provinces. Modi on his part visited China several times as the chief minister of Gujarat. Today, both are unquestionable leaders of their respective countries, as also heads of their governments. They are both in a position to formulate and implement policies. The engagements that they will have over the next few days will provide them with an opportunity of not only ensuring a significant commitment from China by investing heavily for the development and growth of the Indian economy, but also the chance to create a conducive atmosphere under which Sino-Indian relations can truly and meaningfully turn into a strong and sustainable partnership.

Interestingly, the visit of President Xi comes after a series of meetings between senior leaders of the two sides that includes engagements between the two foreign ministers, a visit to China by vice president Hamid Ansari and a brief meeting between Modi and Xi on the sidelines of the BRICS Summit in Brazil in July. These meetings between the two sides have well prepared the ground for President Xi and Prime Minister Modi to ensure that “all issues of interest as well as concern” are addressed by the two leaders.

By strengthening and developing its relations with a host of countries in Asia, especially those who are allies of the US, like Japan, Australia, Vietnam and others, Delhi has managed to keep the Chinese interest firmly on India. And this can be best maintained as long as India keeps expanding its pool of options by developing its relations with all the major players in the region and beyond.

For Narendra Modi who came to power on a development plank, China is one of the potential countries which can invest meaningfully in India to help it maintain a good economic growth. From China’s point of view, India not only provides an attractive investment destination, especially under a business-friendly Prime Minister. But investment and economic cooperation between the two sides would also keep India away from joining anti-China forces in the region and join attempts to curb its rise and development.

However, this does not mean that contentious and outstanding issues will not be addressed by the two sides during meetings in the comings days. On the contrary, the forthcoming meetings will give the two sides an opportunity to address all outstanding issues, including their unsettled boundary, in a meaningful manner so that India and China can truly turn their relationship into a meaningful partnership.

With Modi and Xi, considered as two very ‘strong leaders’ in their respective countries, India and China may surprise many of the sceptics by breaking new ground to flag off a new relationship that can help in paving the way for an “Asian Century” where both countries play a key role.