From JNU, With Love

While Kanhaiya Kumar's memoir is eagerly awaited, an eminently readable novel based on life in JNU appears to have fallen off the radar. 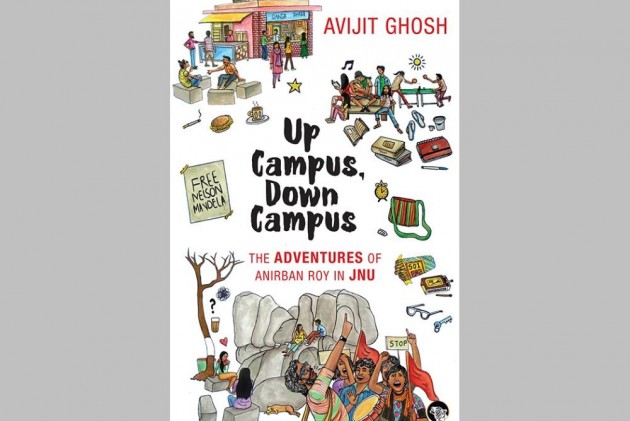 Chetan Bhagat, wrote a reviewer once, was a crappy writer but less crappy than, say Sidney Sheldon. Bhagat however has redefined English literature for the Indian masses, successfully targeting the first generation English readers among others.

He also started the trend of writing ‘campus novels’ in India with his Five Point Someone, which was later made into a film, Three Idiots. But while it was anticipated that his success would trigger a spate of such novels, not too many campus novels have been written in English by others, Amitabha Bagchi’s Above Average being an exception.

While both Bhagat and Bagchi wrote about life in an Indian Institute of Technology, both having studied in one, an equally well or even better written novel based on the Jawaharlal Nehru University (JNU) published earlier this year seems to have escaped attention of most reviewers. It however turns out to be a delightful book that deserves a look.

It’s witty, under-stated, comic and written with far greater sophistication than Bhagat’s first book. And yet, the author, a senior editor with The Times of India Avijit Ghosh, told an interviewer that he had found it difficult to find a publisher with most being indifference to a novel based in the 80s. But what the author calls ‘faction’(which reads like facts but feels like fiction) provides a humorous insight and a deeper understanding into JNU in a way that Five Point Someone didn’t.

‘Up Campus, Down Campus’ takes a breezy and sardonic look at life in arguably India’s most controversial residential university. And while entirely unintended, it does manage to reinforce the stereotype of a promiscuous residential university where 2000 liquor bottles and 3000 used condoms were collected daily, as was alleged by a BJP MLA from Rajasthan Gyandev Ahuja in February this year in the wake of allegations that seditious slogans were raised in the JNU campus.

The MLA would have been delighted to read right at the beginning of the novel that JNU was not all about Marx. While Marx was the means, Freud, ‘especially his sex thing’, was actually the end.

Indeed on his very first day the protagonist from a small Bihar town pushes open his hostel room without knocking first and catches a couple spring apart with the ‘dude holding two imaginary cricket balls in his hands’. That was just the beginning of Anirban Roy’s adventures on the campus.

The mindspace of most of the boys coming from small towns, he discovers, is occupied by girls and their anatomy and were consumed by fantasies about them.

But while back in the small towns, the boys would get tongue-tied and be overly polite when they actually met girls in real life, in JNU Anirban is pulled forward by a girl he meets for the first time and clasped him between her legs. His desperate cry for release, ‘ Jaane deejiye’ (let me go) is dismissed by the girl saying that not before he answered a few questions. “Have you read Antonio Gramsci?”, she asks.

Excellence in academics and the colour of his politics were the only two things that mattered, discovered the protagonist. The teachers, he found, were eloquent and knowledgeable. And friendly. They treated students like grown-ups , invited them home to discuss term papers and did not mind students asking questions which would have been deemed as ‘acting smart’ in the university he had graduated from.

The author brings the journalist’s eye for detail to give a fascinating account of the students’union election on campus, equivalent of a students’ carnival in other universities. Campaigning afforded an opportunity to chat up with every girl on campus, he discovers. Panels are drawn up with the constituents in mind---Oriya speaking candidates because boys from Odisha formed the largest group, girls so that they could campaign in girls’ hostels and Muslims to secure the votes of students of Arabic studies.

The presidential debate between candidates being the showstopper, the best orator would get a leg up as the nominee for president.

JNU does not seem to have changed much since the 80s. It still has four categories of students as in the 80s. A small group get into the civil services or manage to get into foreign universities. A larger group take up jobs in banks, insurance companies, provincial civil services or become lecturers in obscure colleges. The third category slog for years for a Ph.D.  taking pride in not taking up a job, the unemployed and the unemployable. And finally a handful who remain rebels by choice, seeking to change the world and living off well-off girlfriends.

As a coming-of-age story and a rare campus novel, the Adventures of Anirban Roy in JNU will interest young adults and those who have been to JNU. And not just because of the steamy and raw description of love-making. Description of  pamphlets in JNU like ‘free pickles’, the bun-omelette being JNU’s national food and inmates of Poorvanchal hostel being ‘senior scholars’ will surely evoke a smile and not a few are likely to exclaim, Paisa vasool !