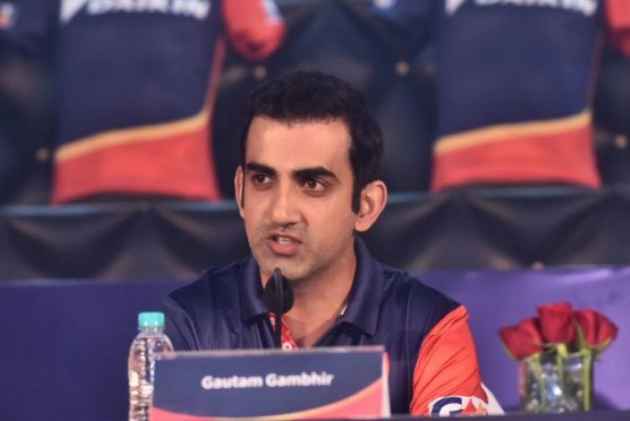 Gautam Gambhir on Wednesday stepped down as the captain of Delhi Daredevils following his team's poor performance so far in the ongoing Indian Premier League.

India batsman Shreyas Iyer was announced as the new skipper at the franchise's press conference which was also attended by coach Ricky Ponting and team CEO Hemant Dua.

The 36-year-old Gambhir, however, will continue to be a part of the team for the remaining eight games. The India discard, who led KKR to two IPL titles and played international cricket for over a decade, said he was not able to handle the captaincy pressure.

"The bell started ringing after the last game (against KXIP at Kotla) and it was time to take the call. My own performance has not been upto the mark. Maybe I was too desperate to turn things around," Gambhir said.

"I was sitting alone and thinking, I couldn't handle the pressure... I was not good enough and that is all," he added.

The experienced combine of Gambhir and Ponting were roped in by the franchise ahead of the season, hoping that it would result in a successful season. However, it has proved to be exactly the opposite with Delhi losing five out of their six games.

On the personal front, Gambhir's performance was below-par by his own standards. He scored 55 in the opening game before failing in the next four innings.

The southpaw insisted that he was not pressurised to quit and it was rather his own decision.

"It is solely my decision and there was no pressure from the franchise. As I said, my performance was not upto the mark and I just could not handle the pressure. That could be one reason (for stepping down)," said Gambhir.

Gambhir performed for India in high-pressure games multiple times and enjoyed success with a high-profile team like KKR over their seven year association.

Was pressure really behind his unexpected decision?

"I was 28 when I joined KKR and today I am 36. May be I could handle pressure better then," he said.

Daredevils CEO Dua also faced questions over his future with a team that has under-achieved over the last 11 seasons.

"If that helps the team, I will happily do it," he snapped back when questions were asked about his tenure.

The new captain, Iyer, sees it as an opportunity and is excited about the challenge. The 23-year-old Iyer is a top-order batsman and has scored two back-to-back half centuries in losing causes.

"I am really loving the responsibility. I love facing challenges. It is a great opportunity to prove myself and take the team to the highest level possible," said Iyer adding that he was informed about the development only this afternoon.

Ponting remained optimistic about the team's chances to make the play-offs.

"We can still turn it around. Six out of our eight games are at home. I have said all along that we have the team to do well. It is just that we have not been able to put it together. The gap between our best cricket and worst cricket has been a bit too much," said the former Australian captain.

Towards the end of the conference, Gambhir was asked about his future as a player.

"I have not thought about it yet. We are in the middle of the competition. We still have a good chance of making the play-offs. We need to be thinking about that rather than my future," Gambhir added.