More than 750 Palestinians were wounded by Israeli fire in Friday's protest, according to Gaza health officials 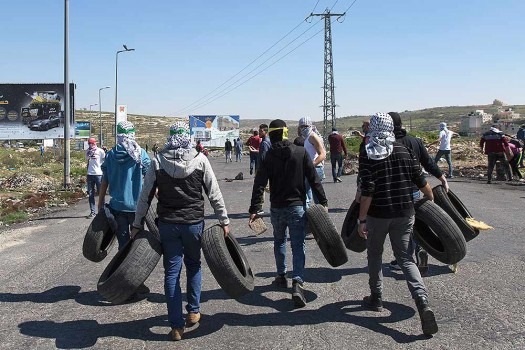 The Palestinian death toll in last week's mass protest on the Gaza-Israel border rose to 18 today, officials said, as Israel rejected allegations of unlawful use of lethal force against unarmed demonstrators.

More than 750 Palestinians were wounded by Israeli fire in Friday's protest, according to Gaza health officials, making it the bloodiest day in Gaza since the 2014 Israel-Hamas war.

Gaza's Hamas rulers have not said if the final aim of protests, which are to continue off-and-on for six weeks, is an attempted mass breach of the border fence.

Hamas leader Ismail Haniyeh yesterday hinted at an escalation, saying last Friday's protests had a "limit," but that "next time, we won't know where that line would be."

Israel accused Gaza's Islamic militant rulers Hamas of trying to attack its border under the guise of protests. Officials said Israel has a right to defend its border, and that troops were instructed to target what the army described as the "main instigators."

However, the military's open-fire policies came under more scrutiny as two amateur videos emerged purportedly showing two Palestinians being shot, one killed and one wounded, while not posing any apparent threat to soldiers.

In one video, a man later identified as Ibrahim Abu Shanab is seen kneeling on the ground in the first of two rows of worshippers Friday, facing the border fence at a distance of 150 to 200 meters (yards).

Suddenly, he stands up, limps a few meters (yards), collapses and his carried away by young man who shout "Allahu Akbar," or "God is Great." Adli Abu Taha, who filmed the scene on his mobile phone, told The Associated Press that Abu Shanab had thrown stones close to the fence before joining the group for Friday prayers.

The incident took place east of the southern Gaza city of Rafah, and medics said Abu Shanab was shot in the leg.

In another video that spread on social media, a young man is seen being fatally shot from behind while running away from the border area carrying a tire.

The Israeli military accused Hamas yesterday of releasing videos that were incomplete, edited or "completely fabricated," but did not elaborate.

The military said troops followed strict rules of engagement, and that protesters were putting themselves in "harm's way" by operating in a dangerous area.

Israeli military officials have said troops would not allow protesters to cross or damage the border fence, and that protesters would not be permitted to get closer than 100 meters to the fence.

The officials did not say how troops would respond if "red lines" were crossed.

An Associated Press reporter saw two young men getting shot in the legs Saturday, in incidents about 15 minutes apart, as they stepped away from a group of dozens of people standing about 200 meters (yards) from the border and walked closer to the fence.

In Friday's protests, thousands gathered near the border in several locations. Smaller groups moved closer to the fence, throwing stones or burning tires. The military said that in one incident, two armed men opened fire near the fence. Rights groups said it's unlawful to use lethal force when Palestinian protesters don't pose an imminent threat to the lives of Israeli soldiers.

"An army can use reasonable force to defend a border," said Omar Shakir of the international group Human Rights Watch.

"This was an incident where soldiers were firing from behind the fence, separated by buffer zones and other objects, firing on individuals well behind the fence, in some cases retreating, not moving forward, or advancing without posing imminent threat." Israel's Defense Minister Avigor Lieberman has rejected international calls for an investigation.