73-year-old Sehari is holding charge of General Secretary of Tehreek Hurriyat since 2004 when the organisation was founded by Geelani. 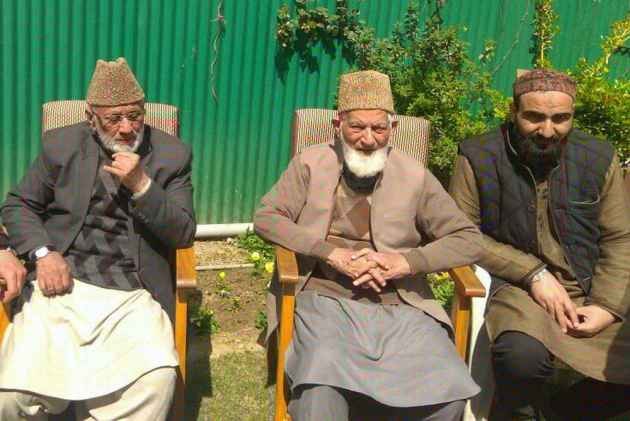 This announcement was long awaited.

Mohammad Ashraf Sehrai Monday was nominated the new chairman of Tehreek-e-Hurriyat, the separatist organization founded by Syed Ali Geelani in 2004 after the split with Jamaat-e-Islami.

The move is seen as a big development in the separatist camp as it would likely to end speculations about Geelani's successor.

Geelani would continue to be the chairman of his faction of separatist conglomerate Hurriyat Conference.

The decision to nominate Sehrai was taken after an executive meet of the organisation held at Hyderpora residence of Geelani.

Sehari is holding charge of General Secretary of Tehreek Hurriyat since 2004 when the organisation was founded by Geelani.

Sehrai, born in 1944 in Tekipora Lolab in frontier Kupwara district, has BA (Hons) from Aligarh Muslim University (AMU). He has fought elections before 1987 and has remained in and out of jail. In 1965, Sehrai was jailed for the first time for “anti-government activities”.  He was only 22 then. He prefers to remain low profile and is known as a jailbird in the separatist camp. Like Geelani, Sehari is a good orator.

In a statement issued here, Tehreek Hurriyat said, “a unanimous decision was taken in an extraordinary meeting to nominate Mohammad Ashraf Sehrai as interim Chairman till the organizational elections. The elections will be held late this year.”

Addressing the meeting Geelani said the government has jailed almost entire Tehreek Hurriyat man force. He said in spite of the arrests, Tehreek Hurriyat would continue its struggle against “forcible occupation.” Geelani, who is facing continuous house arrests and restrictions for past several years, said, his prolonged house-arrest, has affected the organizational work.

“Merely holding a position without practical contribution is an injustice. So today I willfully step-down from the chairmanship and advise shoora (executive body) to arrange an alternative at the earliest”, Geelani said. He said he will extend his fullest cooperation and “sincere wishes” to the next leadership. Later the executive committee nominated Sehrai as an interim chairman.

In 2003, the united Hurriyat split when Mirwaiz Umar Farooq and other senior leaders of Hurriyat including Prof. Abdul Gani Bhat decided that they will go ahead with dialogue with Atal Bihari Vajpayee led government. The Mirwaiz group entered into a dialogue directly with New Delhi and held talks with the then Deputy PM, L K Advani, in 2004. And miffed Geelani formed separate Hurriyat Conference faction and his own party Tehreek-e-Hurriyat as the Jamaat-e-Islam distanced itself from both militancy and Geelani and ousted Geelani from basic membership of the party. Sehari then left Jamaat and joined Geelani.

Geelani insists on the tripartite talks between India, Pakistan and separatist leadership. He also argues that India should accept Kashmir as dispute before initiation of the “result orientated dialogue.” Sehari's stand on the dialogue will not be any different.

Along with Sehari, there were many who were seen as Geelani’s successors. They include Masarat Alam Bhat, Mian Abdul Qayoom, and Geelani’s own son Naeem Geelani. During 2010 mass uprising which erupted after series of killings of youngsters by paramilitary CRPF firing on protesters, Muslim League Jammu Kashmir chairman Masarat Alam Bhat, came into limelight by leading the protests.  In 2010, Bhat was general secretary of Hurriyat Conference led by Geelani. Masarat Alam, 45, who is also known for his pro-Pakistan stand on Kashmir issue, has been in jail continuously since 2010.  In March 2015, at the beginning of PDP-BJP rule, when the Court released him, the State government came under severe criticism to re-arrest him. He was arrested on April 17, 2015. Masarat was popular among the youth.

Kashmir Bar president, Mian Abdul Qayoom, was also tipped to be Geelani’s successor. Qayoom led a successful campaign in 2008 when the agitation erupted in the Valley against the transfer of the forest land to the Shri Amarnath Shrine Board. Qayoom, the Bar president, was arrest and kept in a jail for almost one year.

Unlike 87-year-old Geelani, Sehari's biggest challenge is to connect with masses. While Geelani is known face in the mainstream, separatist political groups and among people in J&K, Sehari is lesser known. That is why Tehreek Hurriyat's announcement to nominate Sehrai as Chairman of the organization replacing Geelani surprised many here.

Bukhari made this comment in response to a question on Geelani's recent rejection of talks offered by an officer of the Intelligence Bureau. Geelani had claimed that an IB officer had approached him for having talks with the Government. Geelani said he rejected the offer insisting the talks would be held only after India accepts Kashmir as a dispute.

"Syed Ali Geelani is a very big leader. My stature is too small before him", Bukhari said.

With Geelani often complaining about health issues, the debate was going on for long in the State, who would replace Geelani. Sehari nominations have put, at present, such speculations to the rest. But many believe his approach would be hawkish and he would be more hardliner.