General Hamid Gul was the military equivalent of Osama bin Laden who died with his boots on and blood of the innocents on his hands. 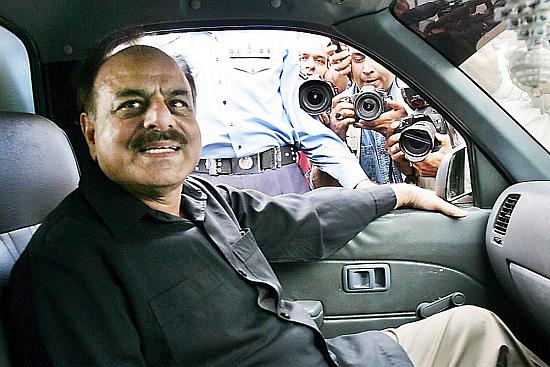 Lieutenant General (retired) Hamid Gul passed away this past weekend. He was perhaps the most vocal Pakistani jihadist general after his former boss General Muhammad Zia-ul-Haq, with whom he shared his Islamist zealotry and now shares the month of death. Both were equally verbose and fanatical but General Gul's boisterous bravado contrasted sharply with General Zia-ul-Haq's sly viciousness.

General Gul epitomised everything that is wrong — or right depending on which side of a suicide bomber's vest one's loved ones are on- with using jihadist terrorism as a tool of foreign policy. He did not make jihadism the cornerstone of Pakistan's Afghan and India policy but he certainly was its most outspoken advocate and practitioner. His 1987-1989 stint as the Director General of the Inter-Services Intelligence (DG ISI) was the high-water mark of his otherwise lackluster military career. And even for those two "golden years" he could only show a crushing military defeat at Jalalabad and blatant political subversion and massive jihadist blowback at home.

His subordinate and the then in-charge of the ISI-backed Afghan Mujahideen assault on Jalalabad, Brigadier (retired) Mohammad Yousaf was to write later in his book, The Bear Trap: "General Gul was removed from his post at ISI in June 1989, when it was clear to everybody that Jalalabad was a catastrophe. His two-year involvement with the Jihad must have been a bitter experience for him. He came at a time when military victory was in sight; he left when Mujahideen defeat was distinctly possible."

General Hamid Gul, a former cavalryman, was never to win a set-piece military engagement in his life despite insisting to the then Prime Minister Benazir Bhutto that Jalalabad would "fall within a week".  And when the late Benazir Bhutto dithered before eventually authorising the assault, General Gul was livid. The respectable military historian Mr. Shuja Nawaz chronicles that General Gul told her "You cannot deny us the drive into Kabul in victory to pray at the Kabul mosque". The humiliation he and his henchmen suffered in the spring and summer of 1989 at Jalalabad was immediate, utter and quite public. According to Brigadier Yousaf's account 3000 jihadists were killed or wounded.

We, in Peshawar, saw first-hand the scores of injured Mujahideen being brought to the Arab-run hospitals mostly situated along the University Road after the Afghan army pummeled them in the outskirts of Jalalabad. At that time an Arab orthopedics and trauma surgeon named Ayman al-Zawahiri practiced out of one of those facilities. The terror mastermind needs no introduction today and neither does his leader Osama bin Laden who was among General Hamid Gul's hordes descending upon Jalalabad. Indeed, bin Laden's participation in Jalalabad attack has been a part of the al-Qaeda lore since.

Mr. Shuja Nawaz accurately notes in his book Cross Swords: Pakistan, Its Army and Its Wars Within, "a footnote in this operation was the inclusion in the battle for Jalalabad — unbeknownst to most participants at the Peshawar meeting — of a young Saudi financier and Islamic militant named Osama bin Laden." Benazir Bhutto and the then US ambassador to Pakistan, the late Robert Oakley, had attended that meeting while no Afghan — not even the Mujahideen — was said to have been present there. General Hamid Gul was to strike politically against the Bhutto government that same year while bin Laden launched his first terrorist attacks against the US embassies in Nairobi and Dar-es-Salam within a decade. While political intrigue and transnational jihadism remain General Hamid Gul's lasting legacies, perhaps a major lesson is that even though doing business with unsavory characters can be expedient, it is surely not without disastrous consequences.

The former DG ISI was working closely with the US operatives and administration who were eager to defeat the Soviet Union in Afghanistan back then. In their eagerness the US officials seemed to overlook or underplay Gen Gul's extremely obvious jihadist bent and ties to Afghan fundamentalists like Gulbuddin Hikmatyar, who happened to be his choice to lead that assault on Jalalabad as well.

Mr. Shuja Nawaz has cited General Gul as saying that the CIA officials offered to arrange for his son's education in the US and telling him, when he declined it, that they had done so for all the children of his predecessor DG ISI General Akhtar Abdur Rahman. The team working under General Gul at the time also included Colonel Amir Sultan Tarrar aka Colonel Imam who was to later play a large role in the creation of the Afghan Taliban only to be killed a decade later by the leader of Pakistani Taliban after they fell out with each other.

And it was not that the warning signs of the US backing a reckless jihadist were not there. Indeed detailed reports were written by the US officials like the State Department special envoy Edmund 'Ed' McwWilliams. Mr. Steve Coll notes in his masterpiece Ghost Wars: The Secret History of the CIA, Afghanistan, and bin Laden, from the Soviet Invasion to September 10, 2001 "THE BLOODY DISASTER (sic) at Jalalabad only deepened Ed McWilliams's conviction that the CIA and ISI were careening in the wrong direction. He could not understand why (the US Ambassador Robert) Oakley tolerated Bearden's (CIA's Islamabad station chief) collaborations with Pakistani intelligence and its anti-American clients, especially Hekmatyar and Sayyaf".

Fast forward 26 years and it is not difficult to see the US officials just way too eager to be duped by whiskey-chugging, jihad-peddling Pakistani generals. One need not look farther than Mullah Omar's case where Pakistan, by all indication, successfully deceived the US and protected the one-eyed Taliban leader while his hordes killed Afghan and US men and women. Falling for English-speaking Pakistani generals like Hamid Gul while ignoring their jihadist and blatantly anti-democratic agenda has done irreparable harm to the US chances of prevailing over Taliban in Afghanistan and emboldened those generals to take on their country's civilian dispensation routinely and openly.

The navy blazer donning, heavy smoking General Hamid Gul had an avowed dislike for democracy and particularly the late Benazir Bhutto and her Pakistan Peoples Party (PPP). He tried to keep her out of power by engineering a rightwing coalition Islamic Democratic Alliance (Islami Jamhoori Ittehad or IJI) right before the 1988 elections. She was appalled by him and his maneuvering and wrote in her last book Reconciliation: Islam, Democracy, and the West: "In 1988, the electoral deck was stacked against the PPP. The state-controlled media were clearly hostile to the forces of democracy … Almost unlimited amounts of money poured in from the ISI to fund the IJI campaign."

Bhutto was able to form a coalition federal government but the IJI's success in Punjab dialed Pakistan's national political dial to the right for good. The campaign run by the General Gul-backed IJI was nasty and misogynist and tainted by personal vitriol against Benazir Bhutto. She had to cede any say in, let alone have a control over, the national security and foreign policies before she could set foot in the office. She perhaps tried to appease him and the then brass by allowing misadventures like Jalalabad and later the Taliban enterprise on her watch but General Gul and his ilk seemed to have it in for her permanently. His subordinate Brigadier Imtiaz Ahmed cobbled together a no-confidence move against the Bhutto's government in 1989. Berating politics and politicians and manufacturing dissent through fanatical street mobs and palatial intrigue that General Hamid Gul presided over then has carried over with the net effect being political instability and uncertainty in which Islamist militancy has thrived without pause.

In his day the late general had turned Pakistan virtually into a jihadist Noah's Ark with assorted mercenary fanatics arriving in droves and unleashing havoc in Afghanistan. He was proud and unrepentant about it. He did eventually make it to Kabul as a guest of the Taliban regime after Mullah Omar overran the Afghan capital. General Gul later midwifed the transition of the jihadist mercenaries from Kabul to Kashmir.

The Taliban regime-controlled Afghanistan served as training grounds for various Kashmir-oriented jihadists like Lashkar-e-Taiba and also the sectarian terrorist outfits like the Lashkar-e-Jhangvi. General Gul unabashedly shared the stage with the ringleaders of these outfits at forums like the Defense of Pakistan Council (DPC). He continued to root for the Taliban, al-Qaeda and Pakistan's India-oriented jihadists without any restrain for decades.

General Gul was perhaps the least mysterious of spymasters. He carried himself with a swagger that appeared compensatory and was quick to blurt out his jihadist creed. For almost a quarter century post-retirement General Gul had remained a permanent fixture in the Pakistani media and practically was the bellwether of those sections of the Pakistani military establishment that were given to intrigue and ideologically-anchored adventurism.

Any illusions about that country's paradigm shift should take into account that the incumbent army chief General Raheel Sharif and the Kashmiri jihadist Syed Salahuddin both attended General Gul's funeral. Imbued with his zealotry General Hamid Gul helped sow a jihadist wind in Afghanistan and Pakistan for which the innocents in both countries ended up reaping a whirlwind.

The Ojhri Camp arms depot disaster that happened on General Hamid Gul's watch in 1988 killed hundreds of Pakistanis in the twin cities of Islamabad and Rawalpindi, including a sitting minister Mr. Khaqan Abbasi. Brigadier Yousaf notes that one reason for Ojhri Camp's massive fallout was that instead of using it as a transit facility, General Gul had decided to stockpile weapons before releasing them to the Mujahideen. The Ojhri Camp inquiry conducted by General Imranullah Khan was never made public.

General Hamid Gul was the military equivalent of Osama bin Laden who died with his boots on and blood of the innocents on his hands. One must never speak ill of the dead; it is the jihadist life and legacy of General Hamid Gul, however, which is impossible to ignore if further bloodshed and mayhem in Pakistan and the region is to be averted.

Dr. Mohammad Taqi is a columnist for the Daily Times, Pakistan. He can be reached via email: mazdaki[at]me[dot]com or Twitter @mazdaki). An abridged version of this piece was published in the Daily Times on Aug 20, 2015.