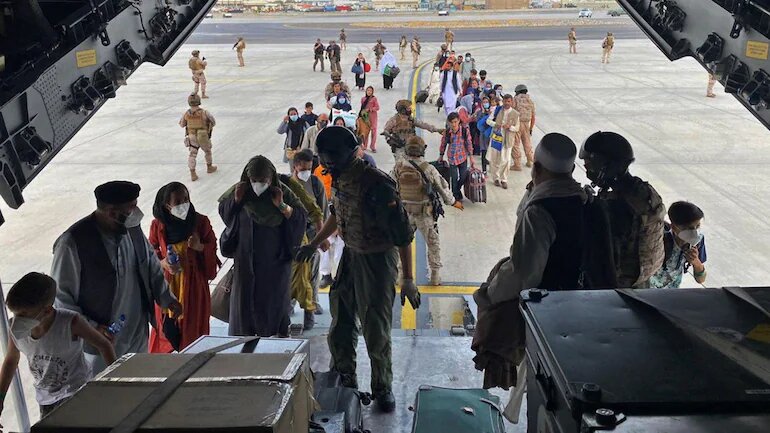 The German civil society organization Mission Lifeline — known for its role in helping rescue refugees from drowning in the Mediterranean — has launched a fundraiser aimed at assisting vulnerable Afghans obtain passports to facilitate their emigration.

Citing German government sources, the German Press Agency (dpa) reported that in early October about 25,000 people in possession of German visas were still stuck in Afghanistan. A classified report by Germany's Foreign Ministry found that former Afghan government staffers and security agents, political dissidents and civil society actors, had been executed by the Taliban since the group's return to power. According to the report, the risk of "having their civil rights and liberties curtailed" and suffering acts of reprisal was especially great in cities. Reports of house raids, arbitrary arrests and forced disappearances have surfaced, as well.

It's for this reason that Mission Lifeline founder and spokesperson Axel Steier has taken to Twitter to call for donations to help at-risk Afghans obtain passports and emigrate to safety. He told DW that he has been in touch with many Afghans who have been granted a German visa, yet remain stranded in the country.

In recent weeks, Steier says, conditions have worsened. Until October, Afghans were permitted to emigrate to Pakistan with official documents other than a passport, with authorities accepting a so-called note verbale issued by Germany's Foreign Ministry. This, however, is no longer the case and Pakistani authorities demand to see valid passports for entry.
"Very few people own passports, and that can make it impossible for them to emigrate," Steier. "In addition, many people who are currently forced to remain in hiding are finding it difficult to obtain passports without putting themselves in danger."

Mission Lifeline plans to collect donations in Germany and then transfer the funds to an Afghanistan-based passport agency, which will help at-risk people acquire official documents. "The agency will hire couriers to collect the passports at the respective government departments," Steier said. Passport applications are usually processed by staffers who served under the previous government.

Passport applicants have been forming long queues outside government offices. Taliban forces have been closely monitoring the goings-on and harassing applicants. The couriers hired by the passport agency will allow especially at-risk people to remain in hiding. "As such, this help is essential for their survival," Steier said.

The cost of obtaining a passport and airplane ticket for an adult is about $800 (€690) for an adult, and $600 for a child. "None of these costs are covered by the German government," Steier said. "It is literally leaving these people out in the cold," he added.

Officials say Germany's Foreign Ministry is aware of the difficulties. According to a statement sent to DW, the ministry is "in constant dialogue with international partners such as Qatar to facilitate further emigration." The statement adds that "in these talks we have brought up the issue that many Afghans lack passports."

According to the statement, Afghans may enter neighboring countries only if in possession of a passport and visa. Foreign Ministry officials "are aware of rumors circulating that passports can be bought, but. as the German government must heed the rule of law, we cannot assist the purchasing of passports."

During a press conference on November 3, Foreign Ministry spokesperson Christofer Burger underscored Germany's desire to cooperate with civil society groups such as Mission Lifeline. He said his ministry is in touch with a range of such organizations in an effort to support at-risk Afghans, and that some were doing excellent work. "That is why," Burger said, "such engagement by these groups is certainly to be welcomed."

On November 4, Mission Lifeline founder Steier announced via Twitter that so far almost €61,000 had been collected in donations. It is uncertain, however, how much longer Afghanistan's passport agency will be able to keep operating. "Once the Taliban become aware of this loophole," Steier said, "they will shut it down."

(This article was originally written in German.)