Getting Out Of The Woods

In addition to amending the Rules of the Forest Rights Act, greater attention needs to be paid to changing the Land Acquisition Act 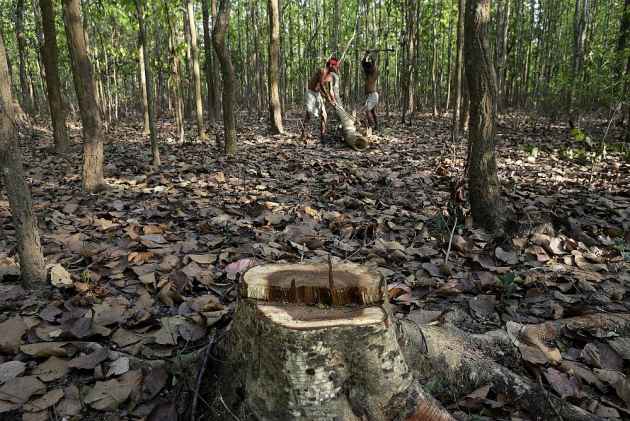 There is no explicit provision in the Forest Rights Act, 2006 for obtaining permission of the Gram Sabha for diversion of forest lands to non-forest purposes. However, Section 4(5) of the Act prevents government to evict any forest dweller unless the recognition process as provided in the Act is completed. Further, Section 5 empowers the Gram Sabha and forest right holders to protect forests and stop any activity that affects forests.

Keeping these sections in mind the ministry of environment & forests (MoEF) issued guidelines in August 2009 making consent of affected Gram Sabhas mandatory for all projects that need diversion of forestland for non-forest purposes. However, in actual practice such consent was not being obtained.

Between June 1, 2011 to May 31, 2014, the ministry granted approval for diversion of 87,252 ha of forest land for non-forestry purposes involving 3,772 proposals of various categories like roads, railway, power, mining, etc.

As Chairman of the Vedanta Enquiry Committee, I had held that MoEF would be guilty of violating the FRA Act, if it ignores the wishes of the Gram Sabhas. This stand was later vindicated by the Supreme Court in 2013.

It is interesting that the two ministries— MoEF and tribal affairs— have taken contradictory stands: whereas MoEF waived requirement of obtaining Gram Sabha certificates for linear projects in February 2013, the ministry of tribal affairs, in March 2014, wrote to all state governments that the MoEF circular was against law and contravened Supreme Court’s directions.

So what is the way out?

FRA has been in operation for the last eight years. So far, rights on 21 lakh acres have been recognized under this Act benefiting 14 lakh forest dwellers. In many states, almost all occupations up to December 2005 as provided under law have been regularized.

In order to ensure that the Act does not encourage fresh encroachments it is prudent to fix a date administratively, say the end of March 2015, and complete all Gram Sabha meetings to consider proposals which for some reason were not submitted.

After that Rule 11(1)(a), which gives unlimited time to the Gram Sabha to invite claims, should be amended so as to stop fresh applications from being filed. Rules can be changed administratively without going to the Parliament.

Once all pending claims are settled, it will not be necessary to obtain Gram Sabha approval in those areas where there are no recognized forest right holders. This would cover more than 80 per cent of the forest area, and will boost infrastructural development.

The problem would, however, remain in those pockets where rights have been recognised; these areas would attract the provisions of both FRA and the new Land Acquisition Act, 2013 (LAA). Although consent of the right holder is not needed where government acquires land for itself for infrastructure etc., section 41 of LAA states that ‘as far as possible, no acquisition of land shall be made in the Scheduled Areas’. In case of acquisition in the Scheduled Areas prior consent of the concerned Gram Sabha would have to be obtained, even in cases of urgency.  Whereas PESA had provided for only consultation with the Gram Sabhas, LAA went a step further and made consent mandatory.

However it should not be difficult to obtain consent of right holders by offering a handsome package, say a monthly household income of Rs 5000 adjusted to inflation for the next 20 years. Cost of land is not more than 2 to 5% of the project cost, if land is made available quickly. Wherever people are not willing to give their land, it must be assumed that the fault is either in the package being offered, or in the progress of implementation.

Delay in making land available quickly is not because of the consent clause, but because the Act establishes several committees adorned by activists and “experts”. To begin with, for all cases of acquisition a Social Impact Assessment would be done by an Independent body, and its report would be vetted by another Expert Group. In addition, there would be an R&R committee, a state level Committee, and a national monitoring committee to pontificate over the reports generated by the junior committees.

Delay in completion of formalities would also delay payment of compensation thus harming forest dwellers and causing uncertainty in their rehabilitation.

A simpler solution would have been to delegate powers to the district Collector to acquire up to 100 acres of land including all liner projects without committees and without any reference to the state governments. The Collector would obtain landowners’ consent and fix compensation through negotiations without any upper limit, and thus make land available to the project in a few months’ time.

To sum up, in addition to amending the Rules of FRA, greater attention needs to be paid to changing the LAA.

Better infrastructure and industrialization would not only increase labour productivity but will reduce pressure on farm land by pulling people away from land to non-farming occupations.

In its present form the Land Acquisition Act has unfortunately ended up being both anti-farmer and anti-growth, but it is certainly pro-civil society and pro-bureaucracy!