Save the climax, the Hindi version follows the Tamil original. The remarkable difference is how the marketing genius of Aamir Khan has turned eight pack abs and buzzcut with scar into style statements On the face of it Ghajini is an oft-repeated tale of the hero seeking revenge on the killer of his lady love. What makes it different then? The plot contrivance of anterograde amnesia i.e. short term memory loss. Our hero Sanjay Singhania (Aamir Khan), after being violently hit on the head, can only recall incidents that have happened less than 15 minutes ago. This allows for some experimentation in story-telling, play with images and editing as the action moves back and forth in time. It also helps the director in developing new modes and strategies of bumping off the bad guy. So Sanjay uses various devices--Polaroid camera, tattoos on his body, elaborate maps and messages on the wall--to help him in remembering that he has a major goal to accomplish.

For much of this, filmmaker A.R. Murugadoss needs to sincerely thank Christopher Nolan’s Memento right down to the inscription on the hero’s chest "Find Him…Kill Him". Where Murugadoss strikes a different note is in the elaborately played out comedy of errors love story wherein you have a fledgling model with a heart of gold, Kalpana (Asin), claiming to be the girlfriend of Sanjay who, of course, doesn’t even know what she looks like. 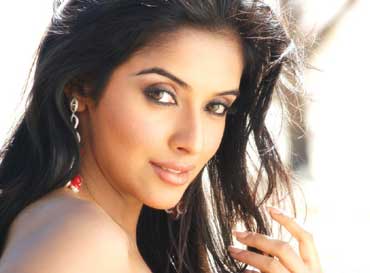 The other obvious departure from Memento is the song-n-dance. My friends from the South swear by the original soundtrack by Harris Jeyraj but my ears haven’t quite tuned in on the Tamil original yet. What works for me are two songs specifically, Guzarish and Behka. The songs have been shot in what we Northerners identify as quintessential Tamil idiom—as stylised set-pieces in kitschy colours. Two of these have been directed music video style by hotshot ad filmmaker Ravi Udayawar (remember his Dooba Dooba?)

Save the climax, the Hindi version follows the Tamil original, shot for shot, cut for cut, character for character, actor for actor. The villain is the same, and so are the heroine and the Inspector investigating Sanjay. Even the name of the mobile company that the hero works for --Airvoice --  is not changed. The differences are minor. The hero is 1975 born in Hindi, 1976 in Tamil. He is Singhania in Hindi, Ramaswamy in Tamil. He keeps the Polaroid camera on the right side, not the left as in Tamil version. The nerves and brains opening credits are similar, so is the first killing with blood dripping from the tap (though in Hindi you hear the sound, and don’t see it graphically as you do in Tamil). Why, even some props stay—the fan cooling off Asin in the makeup room and isn’t she reading the same Mario Puzo in both the versions? 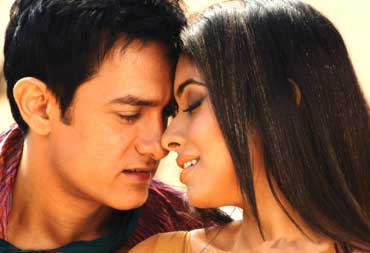 The remarkable difference is how the marketing genius of Aamir Khan has turned eight pack abs and buzzcut with scar into style statements. But beyond the gimmickry, this surely is Aamir’s most physical performance yet. His presence is like that of a tormented animal--full of grief and rage. However, it’s not Aamir beating the pulp out of the goons that works for me. He is still at his best when he uses his face and registers fleeting expressions thereon. The haunted and hunting look in his eyes stands out. My favourite is the scene in the bus when he looks lovingly at Asin and says those three words. It is never quite as romantic and heart-stopping a moment in the Tamil original. The other Aamir touch is using Sunil Grover who plays Ruk Ruk Khan in Kaun Banega Champu in one of the comic scenes. Now is that another jab at SRK? Go figure out for yourself.

Asin’s act does not change at all from the original, but her wardrobe does entirely. Her character Kalpana is the kind that reaches out to the crowds--nice, warm, effervescent and vulnerable, a woman after every man’s heart. Moreover she is pleasing to the eye and cries in a manner that the mascara in her eyes and makeup on the face does not get washed away. In one phrase, she is 'eminently suitable' to be the next heroine of consequence in Bollywood.

The weak links are the zero presence Jiah Khan as the medical student who helps Sanjay in his mission and Pradeep Rawat as the villain with a horrible wannabe Haryanvi accent. The second half becomes way too prolonged and the climax, which am told has been changed entirely (and which I could not see in the bad, scratched out DVD I had procured of the Tamil version), leaves one dissatisfied. The effort to tie up all the loose ends jars and the end is way too safe. An edgy, far more treacherous end would have been more in order.