Give Ace Mountaineer Malli Mastan Babu His Due

It is time India learned to identify and recognise its true heroes. 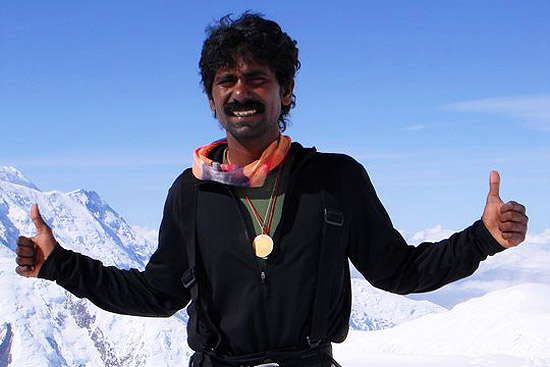 It is a pity that in a country where popular cricket and film stars are deified, the tragic death of Malli Mastan Babu in the Andes in South America, while climbing the mountain between Chile and Argentina and bring yet another laurel to India, has gone almost unnoticed. The cragsman, who was a star in his own right, has not been given his due.

The news of Mastan Babu missing since March 24 in the Andes, the longest and among the world's highest mountain ranges, was first announced on a Facebook page, "Rescue Malli Mastan Babu", created by his fans and well-wishers, to provide information about rescue and search operations. There was a poignant, heartbreaking message, "Mountains retained its favorite child… R.I.P. Malli Mastan Babu", on the same page, after his death was reportedly announced by an official at India's embassy in Santiago, the capital of Chile, over the weekend.

On April 5, External Affairs minister Sushma Swaraj confirmed that the lifeless body of Mastan Babu was discovered at a height of 6,000 feet in the Cerro mountain range. Also recovered from the site were a bag with his belongings, a copy of the Bhagvad Gita, a prayer bead and India's flag. He was only 40 — by no means an age to die — and full of joie de vivre.

It may be debatable whether mountaineering is a sport. But even if it is not, it calls for a great deal of physical and mental endurance to withstand wear and tear. The kind of mountaineering Mastan Babu excelled in required immense talent, confidence and stamina.

We Indians take pride in celebrating the number of records and feats of Sachin Tendulkar, Viswanathan Anand and our past hockey teams, which used to win gold medals with ridiculous ease. But just look at some of Mastan Babu's tours de force and accomplishments: In 2006, he became the fastest mountaineer to conquer the tallest peaks on each of the seven continents. Mastan Babu climbed Aconcagua (South America, 6,962m), Denali (North America, 6,194m), Elbrus (Europe, 5,642m), Kilimanjaro (Africa, 5,895m), Kosciuszko (Australia, 2,228m), Everest (Asia/World, 8,850m), Vinson Massif (Antarctica, 4,897m) and Carstensz (Australia/Oceania, 4884m) in just 172 days — between January 19 and July 10, 2006. He is the only South Asian to achieve the incredible landmark; and the first Indian ever on Vinson Massif, Antarctica's highest mountain.

Never the one to rest on his laurels, he continued to set new benchmarks in his pursuit, taking physical and mental endurance and excellence to distinctly different heights. In June and July 2007, he undertook, through challenging trekking and climbing, a high-altitude traverse of Yamunotri, Gangotri, Kedarnath and Badrinath in the Himalayas. In 2008, Mastan Babu accomplished yet another mind-boggling feat, trekking from Everest to Kanchenjunga, covering nearly 1,200 km of the world's highest terrain, in less than 100 days — all by himself, it must be emphasised. En route, he ascended the world's five tallest peaks save K2 – Everest (8850m), Kanchenjunga (8586m), Lhotse (8516m), Makalu (8475m) and Cho Oyu (8201m).

Born on September 3, 1974, in a poor family in the tribal Gandhi Jana Sangam village 40 km from Nellore in Andhra Pradesh, Mastan Babu was the youngest among Malli Mastanaiah and his wife Malli Subbamma's five children. He was said to have been named after a saint called Mastan Swamy. A brilliant student, Mastan Babu studied at an army school in Korukonda in the Vizianagaram district. He was an alumnus of Indian Institute of Technology (Kharagpur) and Indian Institute of Management (Calcutta). Besides studies, he impressed in various sports and adventure activities at these institutions.

His poor, uneducated parents made many sacrifices to ensure that their children got proper education and became better human beings. They were happy giving the children all the opportunities they themselves were deprived of. While Mastan Babu became an engineer and management consultant, one brother became a schoolteacher and another, a farmer; one sister became a doctor and another, an 'attender' in a school.

Mastan Babu, who worked as a software engineer for three years in a reputed company, seemed destined to scale the world's tallest and toughest peaks, although a lucrative career as an engineer or management expert beckoned him. He was drawn to mountaineering not by any famous climber but by a statue of Lt. M. Uday Bhaskar Rao, a former student of the army school who, along with five other military officers, died at an altitude above 26,000 feet on the flanks of Everest, also known as the Death Zone, in 1985. As an 11-year-old, Mastan Babu, filled with awe and inspiration, would stand before the statue. "My Everest ascent and journey was both a pilgrimage and a tribute to Rao," he once said.

Having been long bitten by the mountaineering bug, Mastan Babu founded, in 2003, the Adventure Club at the IIM-Calcutta and started organising rock-climbing, skiing and trekking activities in the Himalayas. Having decided what he wanted to do and achieve in life, he could only look up, and climb; there was no question of coming back, or coming down.

By February 2005, braving windy conditions and unpredictable weather, Mastan Babu had ascended Aconcagua which, at 6962m height, is the tallest summit outside the Himalayas. (He later climbed Aconcagua two more times.) In 2006, he conquered Everest, too. During his extraordinary career Mastan Babu also climbed Huascaran (6768m) in Peru, Sajama (6542m) in Bolivia, Chimborazo (6310m) in Ecuador and Ojos del Salado (6800m) in Chile.

Nearly 90 per cent of Babu's expeditions had been solo. Once, when asked on a radio interview why he preferred to go solo, he remarked: "Simply because it would be difficult for other climbers and trekkers to match my pace." When he did not undertake any expedition solo, he would lead a group of people. He admitted that scaling the Himalayas had been tough; he was injured a couple of times during the expedition.

When not mountaineering, he would be busy discoursing on leadership and management at corporate houses, cultural and social organisations and management institutions in India, Kenya, UAE and the US, motivating and inspiring the audiences with his impressive achievements. It is time India learned to identify and recognise its true heroes. It is both sad and strange that such a towering mountaineer of international repute as Mastan Babu, who brought so much honour to the nation, never received any award from his state government. Nor from the Indian government, for that matter.