Give Instant Farewell To Those Who Don't Think About Your Welfare: Modi Attacks Congress In Karnataka Rally

In the last leg of his campaigning for May 12 polls today, the Prime Minister will visit Karnataka's Chitradurga, Raichur, JamaKhandi and Hubli area. 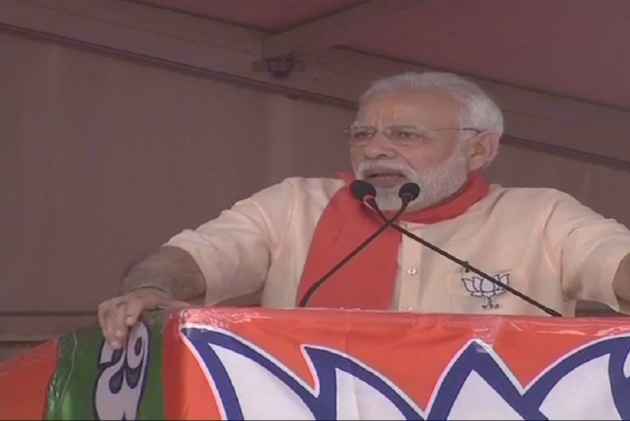 Ahead of the state legislative assembly elections in Karnataka, Prime Minister Narendra Modi today urged voters to "bid farewell" to the Congress party.

Speaking at an election rally in the poll-bound state, Modi said, "Congress does not care about 'Dil' (people's hearts and feelings) or Dalits. They only care about deals. If they cannot do welfare, then they should be bid farewell."

"Congress is obviously uncomfortable today because the highest offices of the land are occupied by people from poor and humble backgrounds. That is why now Congress prefers to mislead in the name of the Dalit community," he Modi while addressing a rally at Chitradurga.

PM Modi who is campaigning in Karnataka will address four rallies in the state today. He alleged the ruling party in the state is "spreading lies" and trying to "mislead" Dalits, adding that for the sake of one family, Congress sidelined several national stalwarts.

In the last leg of his campaigning for May 12 polls today, the Prime Minister will visit Karnataka's Chitradurga, Raichur, JamaKhandi and Hubli area.

He will hold two public meetings and will take part in a road show in Belagavi.

In a related note, The Election Commission-appointed surveillance teams have seized suspect cash, jewellery and other inducements worth over Rs 120 crore in the poll-bound state yesterday.

Cash amounting to over Rs 67.27 crore, over five lakh litres of liquor worth Rs 23.36 crore, gold valued at 43.17 crore and other items such as pressure cookers, sarees, sewing machines, gutkha, laptops and vehicles, among others, worth about Rs 18.57 crore, was seized.

Karnataka goes to polls on May 12 and 2,655 candidates, including 219 women, are in the poll fray for securing 224 seats up. The results will be declared on May 15.

Data provided by the Chief Electoral Office in Karnataka has indicated that the BJP will contest all 224 seats, while the Congress will contest 222 seats. The H.D. Devegowda-led Janata Dal-Secular will contest on 201 seats.

Yesterday, PM Modi went on an all-out attack against the Congress, saying the party whose flag once fluttered "from Panchayat to Parliament" will become "Punjab, Puducherry, Parivar" Congress after its impending defeat in Karnataka.