Going Back To Vajpayee

Everyone’s talking of the Vajpayee model for Kashmir resolution since he passed away. How relevant is it? 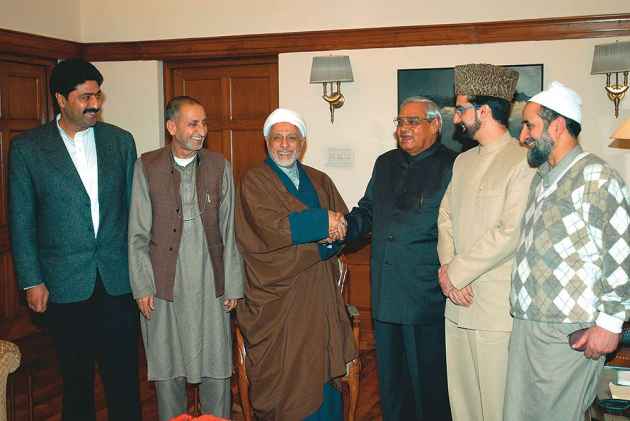 He lived the life a recluse since demitting office in May 2004 as the longest-serving non-Congress PM of India and had not appeared in public since 2007, but on his death political leaders of different shades in Jammu and Kashmir are talking about going back to his legacy. Not a day passes in Jammu and Kashmir without Vajpayee’s mention as politicians constantly ask the Centre to follow the Vajpayee model.

While she was CM, Mehbooba Mufti repeatedly said both India and Pakistan should go back to Vajpayee’s time, “when peace prevailed on the borders and both the countries moved closer to each other on the path of friendship”. Last year, when PM Narendra Modi talked about embracing Kashmiris, she said she saw a “reflection of former PM Atal Bihari Vajpayee in Modi ji.”

The Vajpayee years are also fondly rem­embered by many separatists. “Vaj­payee was a genuine peacemaker,” says Mirwaiz Umer Farooq, chairman of his faction of the Hurriyat Conference. “In the later part of his term as PM, he began realising that Kashmir is not a problem of jobs or economic package, but a political problem that cannot be addressed without listening to the people of Kashmir.” Mirwaz had led the Kashmiri ­delegation that held the first round of talks with Vajpayee-led NDA government on January 22, 2004, and another round on March 27 that year. The then deputy PM L.K. Advani represented the NDA during the dialogue process. During the talks, the Hurriyat leaders also held meetings with Vajpayee.

As the separatists didn’t want to engage within the Indian constitution, Vajpayee said he was ready to engage under the ambit of humanity (“insaaniyat ka daayra”). “One must give credit to him that he acknowledged the problem and showed flexibility,” says Mirwaiz. “Vaj­payee not only believed in the India-Pakistan dialogue process, he also came to understand that Kashmiris are party to the problem, and they need to talk to both the countries. His legacy will stay.”

Vajpayee’s words echo even in the now-discarded Agenda of Alliance (AoA) between the PDP and the BJP, in which both parties had agreed to follow Vajpayee’s insaaniyat (humanity), jamhooriyat (democracy) and Kashmiriyat (Kashmiri syncretic culture) approach towards Kashmir, while stating that the coalition government would facilitate a sustained and meaningful dialogue with all internal stakeholders, including all political groups irrespective of ideological views and predilections.

There are three things because of which Vajpayee was seen in Kashmir as different from others. He was first to pilot a major India-Pakistan peace initiative with the Delhi-Lahore bus service, which had a positive impact in the Valley. Secondly, during the Vajpayee years, Kashmir was also experimenting with a political alternative (a PDP-Congress coalition in government), border ceasefire, opening of LoC crossing points and better Delhi-Srinagar communication—all creating an environment of hope. And in spite of his RSS background, Vaj­payee steered safe from the Hindutva discourse and talked instead of ‘insaaniyat, jamhooriyat and Kashmiriyat’ even though Kashmiris had not expected such an approach from the NDA government in the first place.

“Strangely and ironically, but not without reason, Vajpayee remains the only positive reference point now in the only Muslim-majority state of the country,” says senior PDP leader Naeem Akhtar. “He was the best practitioner of the art of possibilities. When someone talks about Kashmir here, from any political ideology or party, Vajpayee is an inescapable mention as he had brought freshness to the otherwise deadlocked discourse on the status of Kashmir.”

Akhtar praises his party’s founder Mufti Mohammed Sayeed for org­anising a rally in 2003 for Vajpayee to address Kashmiris, which he ­believes changed the tide in the Valley According to the former J&K gover­nment spokesperson, Vajpayee was the first to listen to the people of Kashmir, understand their yearnings and script a new idea of resolution, which could be acceptable to the maj­ority of people in South Asia. “In my opinion, it can never be replaced or substituted by any other possible formulation,” says Akhtar.

On April 18, 2003, add­ressing the rally in Srinagar along with then CM Mufti Sayeed, then PM Vajpayee admitted that all issues need to be resolved through dialogue, and said the dialogue should take place on the basis of justice and insaaniyat. Later, on April 23 in the Lok Sabha, Vajpayee elaborated his Srinagar statement, saying he assured the people of Jammu and Kashmir that the issues would be resolved through talks and the three guiding principles for dialogue will be insaaniyat, jamhooriyat and Kashmiriyat. The phrase stuck and on his death, it is being repeated.

Although talks couldn’t move in the same direction despite the efforts of Vajpayee’s successor as PM, Manmohan Singh, Akhtar argues Vajpayee is as relevant today to the resolution of Kashmir as he was when he was PM. “More than Vajpayee’s defeat, his exit represented Kashmir’s misfortune,” he says.

In the Valley’s political landscape, there is unanimity that Vajpayee was sincere about the dialogue process. The opposition National Conference says Vajpayee didn’t shy away from engaging with the Kashmir issue and tried somehow to resolve it. “He was not successful, but he tried,” says NC spokesperson Junaid Azim Mattu, who believes Vajpayee represented perhaps the magnanimity the State is capable of showing, but has not shown since. “Confidence-building measures like ceasefire are his legacy, as are his summit with Musharraf and his efforts for giving hope to Kashmiris that the issue could be resolved.”

Analysts in Kashmir, however, say there is a difference between Vajpayee the man and the myths associated with him. “When it comes to the resolution of the Kashmir dispute, Vajpayee is often inv­oked as a role model. This has never been a credible description for me,” says Prof Siddiq Wahid, former vice-chancellor of the Islamic University of Science and Technology (IUST). “It is true he was willing to ‘talk’, but the operative question is this: ‘Was he willing to negotiate?’ That’s what the resolution of any complex political dispute demands.”

According to Wahid, Vajpayee got cold feet when an opportunity presented its­elf—for example, it was his government that trashed the NC’s autonomy resolution. “The resolution asked for no more than what Article 370 and the 1975 Accord already stipulated. And yet the Vajpayee government summarily rejected it.”

In the external dimension, the 2001 Agra Summit came close to a concord, but was scuttled, “either because Advani, the BJP conduit for the negotiations, felt neglected, or because (then Pakistan President) Pervez Musharraf made an error in judgment in holding an unsch­eduled press conference,” argues Wahid, pointing out that the domestic as well as the external failures took place under Vajpayee’s leadership.