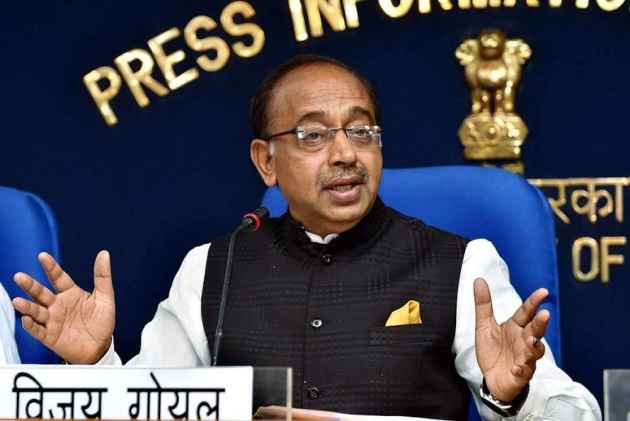 Outgoing Sports Minister Vijay Goel today asserted that he had a successful stint in office and categorically stated that the government alone cannot build a sports culture in the country.

Goel, who was today shifted to Parliamentary Affairs Ministry as a minister of state in a reshuffle after a 13- month tenure, said he had worked with the intent of bringing about a positive change in Indian sports.

"If the Prime Minister wants me to give me other responsibility, I have to accept it. If I had not performed, the PM would have dropped me in this reshuffle. But I had a successful stint, so I have been given more responsibilities," Goel told PTI before leaving for Gramin Khel Mahostav, his last assignment as Sports Minister.

"I thoroughly enjoyed my term. It is the PM's prerogative if he wants me to move somewhere else," Goel said when specifically asked if he was happy or surprised by the change of portfolio.

Goel, who took office in July 2016, listed his achievements but said a lot needs to be done.

"We want a sports culture to develop in this country. But the government alone can't do it. The parents at homes and teachers at schools need to encourage children to play games. The Prime Minister is a sports lover and I would request him to do more for sports," he said.

Goel said the ministry under his charge had made some strides forward in making sports administration effective in the country.

"See, we involved every stakeholder. We made considerable progress in preparing the (pending) Code (Sports). It's with the High Court now and we should soon see its implementation.

"We formed an Olympic Task Force which had some of the best sportspersons. Its recommendations are great and should help take the sport forward. The National Talent Search Portal is also a good initiative by the ministry," he said.

Asked what he would have wanted to do before going out, Goel picked sport's inclusion in the school syllabus.

"We want sports to be included in educational curriculum. We have made good progress but a lot needs to be done. I am sure the new sports minister would seriously pursue it," he said.

"I also wanted that we conduct the U-17 FIFA World Cup in an impeccable manner."