"The Supreme Court has affirmed what the government had said in Parliament while moving the Aadhar Bill. Privacy should be a fundamental right subject to reasonable restrictions," Prasad said. 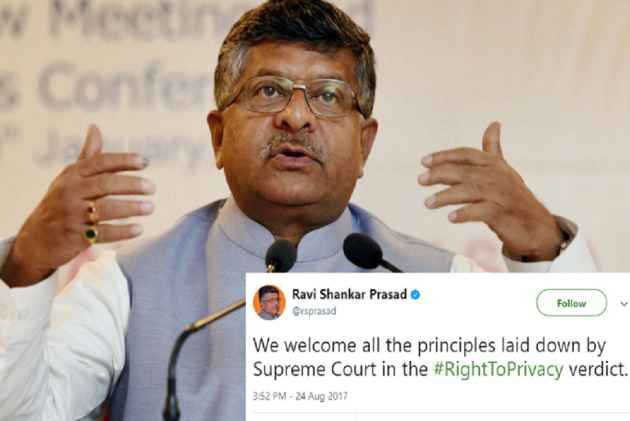 The Centre on Thursday welcomed the Supreme Court's ruling holding privacy as a Fundamental Right, saying the top court has only "affirmed" the government's position on this issue.

Finance Ministry Arun Jaitley however, reiterated the centre's stand that privacy is not an absolute right.

SC accepted privacy is a fundamental right but not an absolute right; judgement is a positive development, PTI quoted him as saying.

Union Law Minister Ravi Shankar Prasad had earlier told reporters that the court has said that right to privacy is not absolute and is subject to reasonable restrictions.

"The Supreme Court has affirmed what the government had said in Parliament while moving the Aadhar Bill. Privacy should be a fundamental right subject to reasonable restrictions," Prasad said.

We welcome all the principles laid down by Supreme Court in the #RightToPrivacy verdict.

Reacting to the assertion of the Congress that the verdict was a rejection of the BJP's ideology of "suppression through surveillance", Prasad tweeted: "What has been the record of the #Congress in protecting individual liberties was seen during Emergency."

A nine-judge Constitution bench headed by Chief Justice J S Khehar today ruled that "right to privacy is an intrinsic part of Right to Life and Personal Liberty under Article 21 and entire Part III of the Constitution".