The 24 roads inaugurated at a virtual ceremony included one built at an altitude of more than 19,000 feet on the Umling-La pass in southern Ladakh, Rajnath Singh said, adding it has now become the world's highest motorable road. 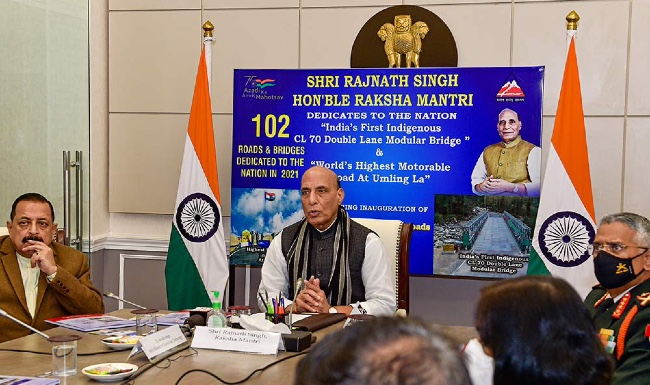 The possibility of any kind of conflict cannot be ruled out in today's uncertain environment, Defence Minister Rajnath Singh said on Tuesday as he listed the development of border infrastructure as part of efforts to boost India's preparedness to confront any security challenge.

After unveiling 27 roads and bridges projects implemented by the Border Roads Organisation (BRO), he said India would not have been able to respond strongly to the adversary in the northern sector if there was no infrastructure in the region.

"The situation we faced in the northern sector recently, and the manner in which we were able to respond strongly to the adversary, would not have been possible without appropriate infrastructure development," Singh said in a reference to the eastern Ladakh row.

The defence minister also rued that adequate attention was not given to developing border infrastructure after Independence, but asserted that there was a major change in the approach in the last few years.

"After Independence, our policies were such that the internal areas of the country developed, but the border areas remained relatively deprived of development. This situation continued for a long time," he said.

"As we used to move away from Delhi, the graph of development also kept falling down in the same proportion. Earlier it was said that people from border areas may be far from Delhi, but they are not far from our heart. But as the transport sector witnessed major expansion, it became an old saying," Singh said.

The defence minister said the roads in border areas are not only for strategic needs but they also ensure equal participation of remote areas in the development of the nation. "In this way, these bridges, roads and tunnels play an important role in our security, and in empowering the entire nation," he said.

The defence ministers said that there was a need to strengthen India's surveillance system the way the country is strengthening its border infrastructure. In this context, he cited problems like infiltration, skirmishes, illegal trade and smuggling in the border areas.

"In view of all this, the government has sometime back started the CIBMS, that is Comprehensive Integrated Border Management System," he said. Referring to the construction of the road in southern Ladakh, Singh said the BRO achieved the "historic feat" despite facing numerous challenges including that of extreme altitude and sub-zero temperature.

"It is a matter of pride not only for BRO but also for the nation," he said.