Halloween Horrors: From US, With Love

A 'killer clown' craze sweeping the UK has led to a deluge of calls to Childline from youngsters left terrified by the sinister phenomenon. 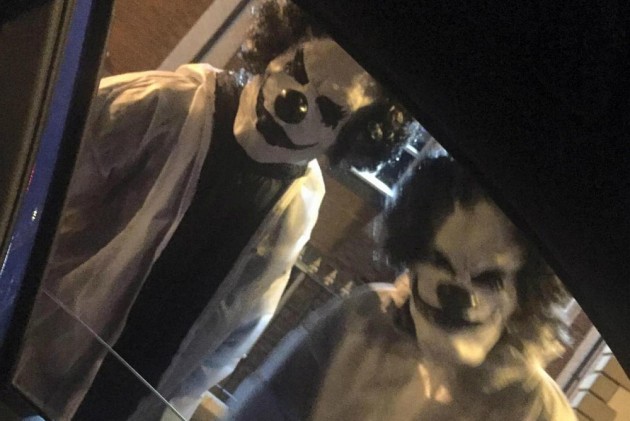 Halloween is a fun festival of 'trick or treats' that children prepare for, for months. But a scary craze exported from the US is spreading in the UK and Europe, creating fear and terror across cities. In a long list of these sightings the latest was that of a man dressed as a clown wielding a machete allegedly threatening two teenage girls, but was hunted by armed police in Suffolk.

This "killer clown" craze sweeping the country has led to a deluge of calls to Childline from youngsters left terrified by the sinister phenomenon. A 10-year-old boy in Plymouth was threatened by a clown who jumped out of a bush carrying a hammer, while in Workington, Cumbria, a clown brandishing an axe chased an 11-year-old girl.

Kent Police saw 59 clown-related incidents between October 7 and 10, Thames Valley Police had 14 reports in 24 hours, and South Yorkshire Police had received 61 reports since September 21, including two of clowns with knives. Forces, including the Met, have warned that jokers using the costumes to deliberately scare people will face arrest.

This craze has prompted parents to keep children indoors, and it is turning out to be a shameful blot on a festival most look forward to.

While Prime Minister Theresa May is making India the first country for her overseas bilateral visit outside Europe since taking office, the first Brexit fallout in the country, though short-lived, was the Marmite war. One of Britain's biggest supermarket chains Tesco refused to bow to demands from Unilever to raise prices in the wake of the Brexit vote. Brands including Marmite, PG Tips, Ben & Jerry's ice cream and Persil disappeared from Tesco's online store, with reports that stocks could start running out in shops across the country after Unilever demanded price rises of 10 per cent, blaming the falling value of the pound. However, within 24 hours marmite lovers were relieved as Tesco and Unilever declared peace.

However short-lived the battle may have been, it has revealed that the fall in the value of the pound will lead to higher prices in the shops. And it already is, which is a cause for grave concern.

But politicians are on their own trip. An unpublished column urging Britain to stay in the EU written by now foreign Secretary Boris Johnson, just two days before he announced he was pro-Brexit has been unearthed. And, as May is under pressure to deliver a 'hard' Brexit stance there are rumours that Chancellor Philip Hammond may quit Cabinet because he feels he is being deliberately excluded from key No 10 meetings because of his outspoken criticism of ministers who back the 'hard' Brexit option of the UK leaving the single market.

While all agree the process of the exit from EU is going to be very tough one—given the drama that is unfolding on a regular basis since the Brexit vote— one can expect even more dramatic twists and turns before we can even get anywhere near invoking Article 50.

London going back in time?

Londoners are truly slowing down and heading to times of horse-drawn carriages of the 18th century, at least so say traffic congestion figures. With a 40 percent rise in congestion, motorists are spending an extra 12.4 hours in traffic a year. Last year an average driver spent 101 hours, or 12 working days, in traffic with average vehicle speed of 7.4mph – slower than a horse-drawn carriage.

The worsening gridlock is being blamed on the rise of internet shopping resulting in more delivery vans. Add to that segregated cycle lanes, road works and the increasing number of minicabs.

On many of the capital's roads, which could once hold four lanes of traffic, space has now been given over to dedicated two-way cycle lanes as part of a £913 million project by former mayor Boris Johnson, bringing traffic to a virtual standstill. Phased traffic lights that give bikes a head-start over cars have also been introduced.

As a result, the capital has become the world's most congested city, according to traffic experts INRIX.

As journeys and fumes increase, it is now estimated that nearly 9,500 people die early each year in the city due to long-term exposure to air pollution. Doesn't sound very encouraging, does it?

On a bed of luxury

Many would say that price could give a nightmare, but that is what John Lewis is charging for its latest super-luxurious mattress. Experts have rushed in to opine that more and more sleep-deprived Britons are willing to pay it, with John Lewis noting an increase of 29 per cent in sales of its premium mattresses in the past few weeks.

So if you are wondering what is so great about these mattresses then take this. The John Lewis one is handmade with natural fillings. Its mini pocket springs are said to 'map the contours of your body while you sleep'. There's a warm wool side for winter and a cotton one for summer.

The Marshall & Stewart Koh-I-Noor mattress super king (£25,190 for the mattress, divan base and topper), part of the Diamond Collection contains pocket springs, cashmere and hand-teased horsehair. Every bed is made to the specific requirements of the client, taking into consideration size, weight and lifestyle.

A hit among celebs is Savoir Beds No 1 super king size (with divan base and topper £53,425). Savoir beds were formed after celebrity guests, including Marilyn Monroe, asked where they could buy the dreamy-soft beds from the Savoy Hotel. They make fewer than 1,000 bespoke beds every year, for customers such as Kylie Minogue and Emma Thompson. Highly skilled craftsmen in West London create the mattresses with extra-deep pocket springs, loose-curled horse-tail hair and carded lambswool.

The £100,000 Vividus by Hästens, is a favourite for celebrities including Angelina Jolie, as well as footballers local to their Chelsea store.

It takes six men 320 hours to create each bed and mattress using 200 kilos of material. Microsprings make the mattress soft and it takes three men two days to tease the horsehair into the correct fluffiness before it is hand-sewn. The divan base, mattress and topper are only available as a whole. That's what one would call luxury!