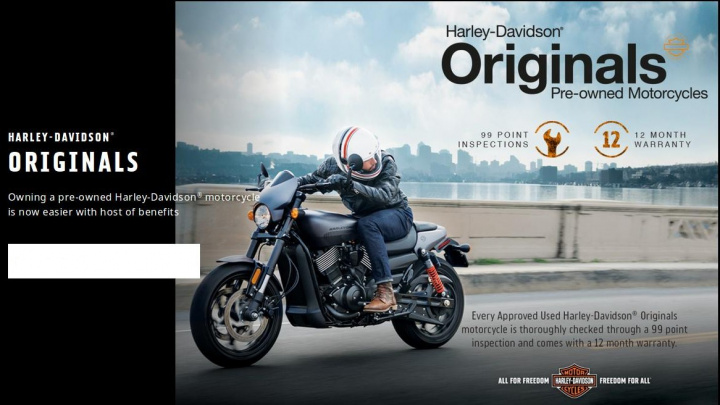 Harley-Davidson India has some good news for most aspiring Harley-Davidson owners in India. If you are on a budget crunch but have always fancied owning a Harley, you can now opt for a pre-owned bike which covers most of the benefits that a new Harley buyer gets.

Sold under the newly setup Harley-Davidson Originals division, the pre-owned motorcycles go through a 99-point quality check to ensure only the best are sold to prospective buyers. These motorcycles also come with the one year warranty that’s offered with a brand new H-D motorcycle. Additionally, customers will be given the option of extending the warranty by two to three years as well.

To know more about the benefits of buying a pre-owned cruiser from Harley-Davidson Originals, check out the official press release below:

Opening the road to freedom for motorcycles enthusiasts.

September 20, 2018: Experiencing and owning a piece of the iconic Harley-Davidson® lifestyle is now more of a reality  with the introduction of Harley-Davidson® Originals, a  pre-owned program that comes with a host of benefits.

With Harley-Davidson of India’s continuous commitment to showcasing and demonstrating quality and performance, all Harley-Davidson Originals come with a 99-point quality check assurance  via stringent examination, thus giving customers peace of mind when they take the keys to their motorcycles.

Buying a Harley-Davidson Originals motorcycle also opens up the world of Harley Owner’s Group (HOG). HOG is the largest owner’s club sponsored by Harley-Davidson with close to one million members across the world.  Every owner will have the opportunity to sign up and become a HOG member and share their passion for freedom and adventure with the rest of the Harley-Davidson community.

Fueling motorcycle enthusiasts and inspiring freedom, Harley-Davidson Originals is sure to open the road to many more riders across the country.