Farmers march towards Delhi to join protestors sitting at borders. April 24 will mark 150 days of the sit-in demonstration which began late November. 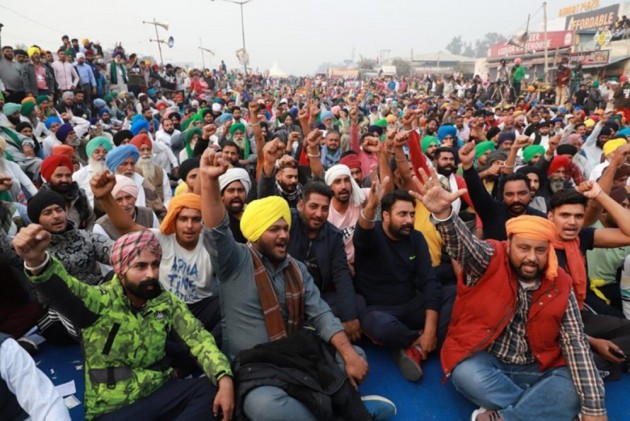 Amid a fresh surge in COVID-19 cases and curbs imposed by state governments, thousands of farmers are expected to reach protest sites at the national capital borders beginning Wednesday, April 21 evening.

Most of them are from Punjab, on way to Tikri border, led by senior members of the Bharatiya Kisan Union (Ugrahan).

They will join farmers already sitting in protest mainly at three sites, Tikri, Singhu and Ghazipur. The sit-in protest is going on since late November.

Meanwhile, Samyukta Kisan Morcha (SKM) – the umbrella organization of which BKU (Ugrahan) is also part – has also urged farmers to return to the protest sites since they fear the government intends to forcibly evict them.

“Now that the reaping season is over, we are asking farmers to return. The repeated requests from ministers are just a prelude to an effort at uprooting us,” claimed Yogendra Yadav, president of Jai Kisan Andolan.

“Warnings of Corona danger have been extended to the farmers who are firmly standing on the borders. By running discussions of Operation Clean in the media, efforts have been made to terrify the farmers. The government have made the pandemic a tool to fulfil its nefarious designs,” tweeted BKU (Ugrahan) earlier.

“From April 24, which marks 150 days of our protests, our colleagues will come from villages in a ‘Delhi Chalo’ march,” general secretary of All-India Kisan Mazdoor Sabha, Dr. Ashish Mittal.

SKM leaders ruled out of any adverse effect from COVID-19 at protest sites. “We started this agitation while the pandemic was on. But is there any spread? Is there a ‘hotspot’ here?” he asked.

BKU (Ugrahan) has a significant number of women members and even has a separate unit. Women in large numbers comprise the protestors who are on way to the national capital.

The Centre and farmers have been at loggerheads over the three laws enacted in September. While the government says it is in the interest of farmers, the latter claim it will give all power to corporates.

Saying that the laws will pave the way for doing away with minimum support price (MSP) and the mandi system, farmer leaders have demanded a total rollback.

The protestors at Delhi borders are mainly from Punjab, Haryana, Uttar Pradesh and some from Rajasthan. Traffic is mostly suspended at these parts. Claiming that the laws will threaten their livelihoods, they have been demanding its repeal.

The three contentious laws are: The Farmers’ Produce Trade and Commerce (Promotion and Facilitation) Act, The Farmers (Empowerment and Protection) Agreement of Price Assurance and Farm Services Act, and The Essential Commodities (Amendment) Act.