Three years ago, the administration had designated 37 sites in Gurugram city for Muslims to offer Friday namaz. A Hindu group, however, has been objecting to the practice of Friday prayers in open for the last few months. 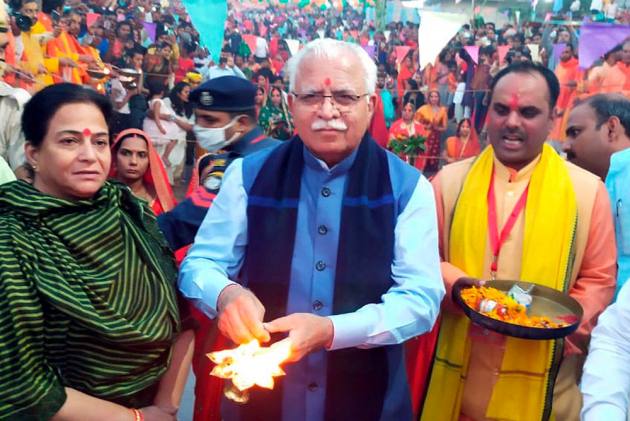 Amidst objections raised by several Hindu groups to Friday prayers by Muslims in open, Haryana Chief Minister Manohar Lal Khattar told the state assembly that no member of any community should hold religious prayers in public places.

People of all faiths hold prayers at designated religious places like temples, mosques, gurdwaras and churches and permissions are given for all big festivals and programmes in open, Khattar said, in response to Nuh Congress MLA Aftab Ahmed raising the issue of objection by Hindu groups during Zero Hour in the House. “But by displaying a show of strength which provokes sentiments of another community is not appropriate,” Khattar said as Ahmed raised the issue.

It was for the second time that the matter figured during the winter session of the Haryana assembly, which began here on Friday.

The MLA from the main opposition party said, “Some elements are repeatedly disrupting Friday prayers. The Constitution gives the right to practice one's religion. No one has the right to disrupt prayers. In Gurugram, thousands of crores of investment has been pumped in and the city is a symbol of development. What message will be sent out from Gurugram if one cannot offer prayers as per one's choice?”

“No member of any community should hold such programmes in open spaces. If they have to hold them, they should do so in temples, mosques, gurdwaras and churches. It is the responsibility of all to maintain a peaceful atmosphere and to see that there is no confrontation in society,” the chief minister said, making an intervention.

He said it is good that people have agreed to hold Friday prayers at certain places (in Gurugram) and there is consensus till new arrangements are made. “But when some people hold prayers outside such spots, a situation of confrontation arises. It is a local issue, it is not an issue which should be flared up as it can spoil communal harmony,” he said.
Khattar said there are annual events of all faiths be it Dussehra, Ram Lila, Urs and these are held with due permission.

“But in routine, daily or weekly (prayers), there are designated places. And where there is confrontation by offering prayers in open spaces, things should be resolved amicably,” he said.

Ahmed said 'eidgahs' and mosques should be freed from illegal encroachments in Gurugram “so that our community members are not forced to offer prayers in open. Thousands of Muslims come to Gurugram in search of employment and there is not enough space for them to offer prayers.”

He told Khattar that protecting minorities’ rights is his responsibility. “The CM gave a statement on December 10 that namaz cannot be offered in open spaces. CM Sahab, you are the custodian of Haryana, you have to protect people of all faiths,” said Ahmed.

Two Congress MLAs -- Mamman Khan from Ferozepur Jhirka from Mewat and Mohammad Ilyas from Punhana in Mewat region of the state – had in the state assembly earlier on Friday objected to the chief minister’s recent remarks over 'namaz', terming it unfortunate and demanding that he take back his statement.

With several Hindu groups objecting to Friday prayers by Muslims in public places in Gurugram, Khattar had on December 10 said the practice of offering 'namaz' in the open "will not be tolerated". He, however, had said an amicable solution to the issue would be found.