Haryana Governor Bandaru Dattatreya, on the advice of the chief minister, allocated and reallocated portfolios among the members of the Manohar Lal Khattar Council of Ministers on Wednesday consequent to the induction of two new ministers. 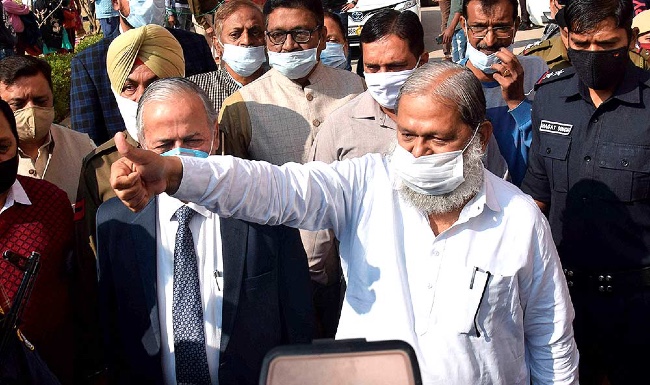 Haryana Minister Anil Vij on Thursday said he had offered to resign from the Cabinet after the Urban Local Bodies department was reassigned to a newly inducted minister and was told that he may be divested of the home portfolio as well.

The urban local bodies, a key department, was allocated to newly inducted minister Kamal Gupta. Chief Minister Khattar also gave one department under him -- Housing for All -- which also went to Gupta, a two-time BJP MLA from Hisar.

Asked about reports that he had offered to resign from the Council of Ministers, Vij on Thursday said when the chief minister expressed his intent to divest him of the home portfolio and keep it for himself, "I then said, if he so wishes, he may take all portfolios."

"I said that I am willing to give up all my portfolios, why just one or two," he told PTI. After the reallocation, Vij, a senior BJP leader and six-time MLA, now holds Home, Health, Ayush, Technical Education, and Science and Technology portfolios.

Newly inducted Ministers -- Kamal Gupta of the BJP and Devender Singh Babli of the JJP -- were allocated portfolios on Wednesday. Notably, Vij was conspicuous by his absence at the oath-taking ceremony of the newly inducted ministers on Tuesday. Shortly before the ceremony, he had a meeting with the chief minister.

State BJP chief O P Dhankar, when asked about Vij's absence at the ceremony, had on Tuesday said, "He is our senior leader and we take decisions after consulting him." Asked specifically if Vij was unhappy over any issue, Dhankar had said, "He is our senior leader and the best performer". Last year, after the tug-of-war with Khattar for days over the control of the CID, Vij was stripped of the charge of the department and it was later allocated to the chief minister.

He had then expressed unhappiness over not being briefed or given feedback on various issues by the CID. However, after being stripped of the CID department charge, Vij had said he has always maintained that the chief minister is supreme and can take away or divide any department.

In July this year, Anil Vij had alleged that some officers are obstructing his departmental work to "please" Khattar as they think that there are differences between the two. He had made this remark after a with the chief minister over Director General of Police Manoj Yadava's tenure.

Khattar was keen on retaining Yadava as the state police chief while Vij was in favour of replacing him after his two-year term ended earlier this year. In February 2015, less than three months after the BJP came to power in Haryana for the first time on its own, Vij, who then held Health, Sports and Youth Affairs, had taken a veiled dig at the chief minister on Twitter, saying, "Thank you chief minister for taking a keen interest in my departments. I'm relaxed."

Vij was then apparently upset with Khattar who then launched a number of programmes and schemes pertaining to the departments handled by him. He was among the front-runners for the chief minister's post after BJP's win in the 2014 Haryana Assembly polls. Khattar, who was then a first-time MLA, emerged as the party's choice for the top post.