Vij was presiding over a meeting of commissioners of police, inspector generals of police, superintendents of police, DSPs and ASPs and other senior officers of the Police Department through video conferencing, an official statement said. 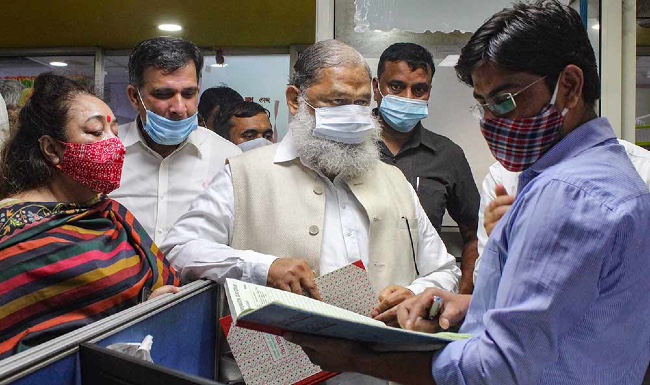 Haryana Home Minister Anil Vij on Monday directed police officials to expedite disposal of cases that may be pending with them due to any reason.

He fixed the responsibility of the officers concerned to record reasons for the delay in such cases. According to an official, Vij wanted that reasons be recorded if any case has been pending with a police station for a long time. "The Home Minister was of the view that some cases might have been pending in police stations for a very long time. He wanted their disposal to be expedited," the official said.

"For example, if there is a case which goes beyond a certain period of time, the officer concerned will record reasons for the same why the case is still pending. In some cases, a court may have stayed the investigation, that reason will be recorded. If there is a delay in putting up case before the court, a reason for the same will have to be given as well," he said.

The official said the idea is to reduce general pendency. According to the official statement, Vij directed the police officers to clear all the cases pending with them at the earliest. He fixed a timeline from SHO up to senior police officers to record reasons for the delay in disposing of the cases. Vij had last week conducted a surprise inspection at a police station near Kurukshetra and ordered the suspension of three officials for their “inordinate delay” in resolving multiple cases.

Besides Shahabad station house officer inspector Prem Singh, Vij had issued suspension orders against sub-inspector Ramesh Kumar for allegedly keeping investigation into at least six cases pending and assistant sub-inspector Sudesh Kumar for allegedly failing to arrest the accused in a case registered over a year ago. The minister had scrutinised several files and found that multiple cases were pending for the last six months to three years and the officials had failed to take action as per rules.

Meanwhile, Vij said a portal would be launched wherein police officers would be able to see all crime-related information of their respective jurisdictions and accordingly will take necessary action on these cases. Vij said the chief minister is working “very hard and that he will not let the hard work be spoiled”, the statement said. "All of us have taken an oath to establish rule of law. We all together will serve the people of the state so that time-bound justice can be given to them," he said.

Vij, who also holds the Health portfolio, told the police officers that as the state is witnessing a surge in Covid cases, it becomes their duty to ensure that guidelines to arrest the spread of the virus are implemented on the ground.