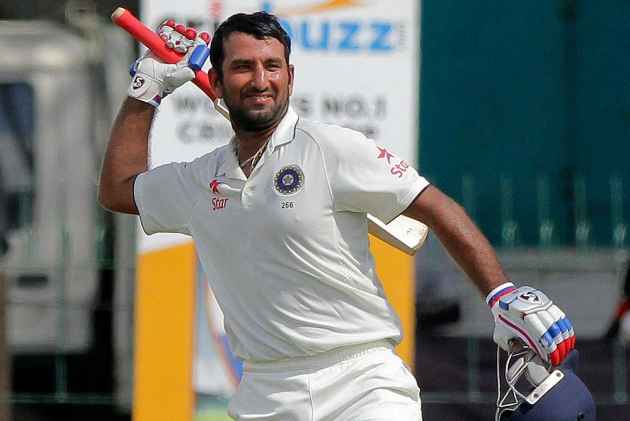 It was a foregone conclusion that Cheteshwar Pujara would bounce back with a bang. Sportspersons of his class and determination usually do? when dropped for lack of form or other reasons.

His typically big hundred in the third and final Test against Sri Lanka at Sinhalese Sports Club Ground in Colombo last month was a characteristic Pujara innings – built brick by brick with a judicious mix of caution and aggression, studded with an array of delightful shots executed with almost effortless brilliance and, significantly, impressively flawless.

Never the one to shy away from any responsibility or any task, including fielding at the dangerous forward short-leg position, Pujara accepted the challenge and opened the innings in the absence of the regular openers Shikhar Dhawan and Murali Vijay.

He was already under pressure to perform as he was making a comeback. The pressure increased alarmingly as India lost the first wicket in the very first over and the second in the fourth. The visitors were tottering at 119 for 5 with all the frontline batsmen back into the dressing room.

But, confident as the man who knows his powers and solid like a rock, Pujara took the situation in his hand and kept the one end intact. He was very watchful, but did not miss any scoring opportunity. With Amit Mishra (59), he added 104 runs for the eighth wicket and ensured that India made at least 300 runs.

When the Indian innings finally ended at 312, Pujara was still there, unconquered on a priceless, match-winning 145. He became only the fourth India opener, after Sunil Gavaskar, Virender Sehwag and Rahul Dravid, to carry his bat through a completed innings.

Though he never stated categorically, it had probably cut him to the quick when he was omitted from Team India after the third Test against Australia at Melbourne last December. More so, when he was not picked in the XI in the one-off Test against Bangladesh in June.

Pujara is one of those few technically and mentally sound Test batsmen who is not known to throw his wicket away. He always puts a price on his wicket. You cannot waste your deliveries on Pujara. Mostly it is the beauty – a very good and often unplayable ball in cricketing parlance – which does him in.

Both in England and Australia, where his seeming failures were glorified simply because he could not match his own higher standards set early in his career, he was never found wanting in trying. He was troubled more by the swing rather than the express speed. (He appears to have overcome this flaw in his footwork and technique.) But there was never any doubt about his commitment. Poor Pujara. The more he looked set to play bigger innings, the harder he was finding to convert those promising, impressive starts.

This cannot be considered a failure by at least the Indian standard of Test match batting against a top team abroad. Was there really any need to drop Pujara in the first place? Maybe Virat Kohli, who took the questionable decision, can shed some light on the issue.

Kohli seems to have a soft corner for the now predictably unpredictable Rohit Sharma. He keeps backing the Mumbai batsman irrespective of his lack of confidence, concentration and consistency. When he led in the first Test in Australia in place of the injured Mahendra Singh Dhoni, he was well aware that it was only a stopgap and he could not call the shots. So both Pujara and Sharma played in Adelaide.

But when Dhoni relinquished the captaincy in the middle of the series and Kohli was ceremoniously offered the crown in the fourth and final Test in Sydney, his true stripes became visible. The first thing he did was drop Pujara and bring back Sharma, who was not selected after the first two Tests in which his scores were 43, 6, 32 and 0.

Sharma made 53 and 39 in Sydney and retained his place in the XI in the only Test against Bangladesh in Fatullah, where he scored 6 in India's only innings. But this did not lessen Kohli's love for Sharma. Before setting off for Sri Lanka, both Kohli and Team India director Ravi Shastri proclaimed in no uncertain terms their faith in Sharma and emphasised that he would bat at No. 3.

Turning a blind eye to Sharma's increasing inconsistency and lack of big scores, the duo kept harping on Sharma's much-trumpeted aggressive streak and ability to score quick runs. This was a clear indication that Pujara did not fit into the Kohli-Shastri scheme of things, particularly after they announced that India would play five bowlers.

There was no place for Pujara in the first Test at Galle, where the duo's blue-eyed boy made 9 and 4 batting at No. 3 and No. 4 respective, which India meekly surrendered from a winning position. There was still no place for Pujara in the second Test at P. Sara Oval in Colombo, where Sharma made 79 and 34 batting at No. 5. Both Kohli and Shastri hailed Sharma's performance sky-high as India won by 278 runs and came back in the series.

They would not have played Pujara in the decisive third Test, too, but for injuries to both Dhawan and Vijay. Pujara grabbed the opportunity with both the hands and performed, in trying circumstances, like a seasoned opener. How eloquently this monk-like man's bat spoke and silenced his critics. As for Sharma, he made 26 and 50 unconvincing runs at No. 5.

Pujara's glowing success, and that too atop the order, has curiously added to the problem of both the team management and the selectors. Kannaur Lokesh Rahul is a fine batsman, who has already proved his class overseas. Will they dare drop him when the regular openers return in the crucial four-Test home series against the tougher South Africa? It seems unlikely in spite of his inconsistent performance in Sri Lanka.

With Rahul, Kohli and Ajinkya Rahane forming the middle-order, there may not be a place for both Pujara and Sharma in the event of Team India persisting with a five-pronged attack against South Africa, too. But it is unlikely. Kohli will possibly take the field with two speedsters, two spinners and six specialist batsmen. It will be ideal, too, against the formidable South Africans.

If Kohli adopts this tried and tested formula, there may be a toss-up between Pujara and Sharma for the sixth batsman's place regardless of where the former or the latter will bat.

??Will the aggressive Indian captain continue to favour his favourite Sharma and ignore Pujara's strong claim following his tour de force in Colombo? Interesting times are surely ahead in Indian cricket.