Have You Done Plastic Surgery On Your Brain Too: Tanushree Dutta To Rakhi Sawant On Rape Allegations

Dutta had slapped a Rs 10 crore defamation suit against Sawant for accusing her of consuming drugs on the sets of the 2008 movie 'Horn Ok Pleassss'. 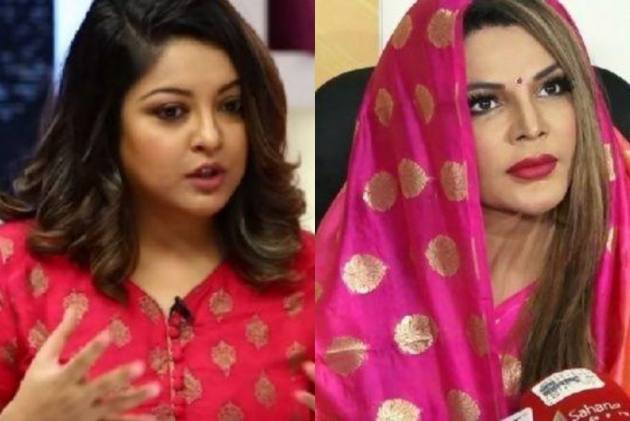 Calling Rakhi uncouth and perverted, Dutta said, people like Rakhi are the reason the minorities get into trouble in India.

"These Rakhi Sawants of the world are the kind of people who are the reason the minorities get into trouble in our country.When they are Hindu they talk badly about other religions and when they convert they talk badly about Hinduism.But the good ones get judged by the behaviour of these so called converts.I guess Rakhi is afraid I will tell people about this incident. I had actually forgotten and didn't bother to respond to her allegations but here: The real reason behind such ludicrous claims. A conversion attempt gone bad!," News18 quoted Dutta as saying.

"You sex and money obsessed moron..Have you done plastic surgery on your brain also? You will perish along with your lies and so will your friends who have put you up for it," she added.

Recently Rakhi accused that Dutta is a lesbian and that she raped her several times. Rakhi also claimed that Dutta was her best friend back then and took her to rave parties where she forced her to consume drugs.

After Dutta came out with her sexual allegations against actor Nana Patekar, Rakhi held a press conference in which she mentioned that Dutta is unnecessarily trying to tarnish the image of the respected Patekar. She also said that just because the Tanushree knows how to speak in English fluently, the media is giving her importance. She even went to the extent of challenging Tanushree Dutta to confront her.

In a statement, Dutta has shared how she hardly knows Rakhi Sawant and thrashed her for the insensitive comments.

Tanushree said, "My Parents always told me to choose my friends very carefully and I learnt to live by that advice.I simply avoid at all cost people I think are not good for me. So its disgusting when uncouth, uneducated dirty, downmarket, classless, characterless, perverted,degraded abominations like Rakhi Sawant claim to ever be friends with me."

Dutta alleged that Patekar had misbehaved with her on the sets of 'Horn Ok Pleasss' in 2008 while shooting for a special dance number for the movie. She had also filed a complaint against Patekar, choreographer Ganesh Acharya, producer Sameer Siddiqui and director Rakesh Sarang.