Have You Looked At Barsa Lakhma’s Face?

Alleged to be a Naxal “leader”, a “commander” who, along with 5 others, is said to be involved in the gunning down of 76 security personnel 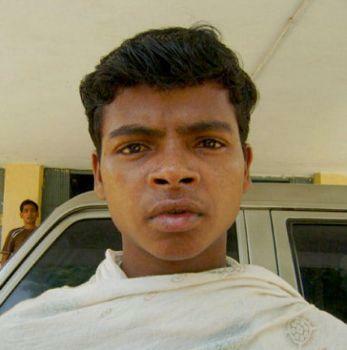 The Hindu, 25 May, posted the above photograph of a person on its frontpage under the head “Six Naxals held for Dantewada massacre”. The person, Barsa Lakhma, is alleged to be a Naxal “leader”, a “commander” who is said to be involved in the gunning down of 76 security personnel. He along with 5 others—Oyam Hidma, Podiyami Hidma, Kawasi Budra, Oya Ganga, and Dura Joga—are in police custody after a “major break-through”.

With his puzzled eyes and full cheeks, how old does he look like?

The Chhattisgarh police is unlikely to reveal his age (truthfully) because Barsa Lakhma cannot be “properly” treated if he turns out to be a juvenile. After this report, Barsa Lakhma has disappeared from news; the other 5 were not even given a public face.

As Barsa Lakhma undergoes torture (is he still alive?), we face some grim questions:

In a recent report (Human Rights Watch), 21 May, the U.N. Secretary General Ban ki Moon has commented extensively on the use of children in the “long-running Maoist conflict”. "Both the security forces and the Maoists in India are exploiting and harming children, destroying their chances at an education and causing damage that will affect their entire lives," said Bede Sheppard, Asia researcher on children's rights at Human Rights Watch. "Secretary-General Ban has brought international attention to the mistreatment of children in India's Maoist conflict," Sheppard said. "The Security Council should be prepared to take action if the Indian government and the Maoists do not act to better protect children."

"Having security forces occupy school grounds puts children and their education at unnecessary risk," Sheppard said. "Now this practice is putting India's reputation on the world stage at risk." A Human Rights Watch report in 2009, "Sabotaged Schooling," observed that “security forces—both police and paramilitary police—occupy school buildings as bases for anti-Maoist operations, sometimes only for a few days, but often for periods lasting several months and even years ... with students trying to carry on their studies in the remaining space, often under distracting and even frightening circumstances”. “Girls”, the report continues, “are especially likely to drop out following a partial occupation of a school because of harassment, or perceived harassment, by the security forces”. This aspect of the atrocity on children by the state has been justly and widely highlighted by the rights groups in India.

However, both the Secretary General and the Human Rights Watch proceed to a far more severe indictment of the Maoists. The indictment has two parts. In the first—relatively “benign”—part, “the secretary-general's report describes how the Maoists, particularly in Chhattisgarh state, have carried out systematic attacks on schools to damage and destroy government structures and to instil fear among local residents”. The Human Rights Watch report of 2009 “documented that at least 34 schools in Jharkhand and 16 schools in Bihar were attacked by the Maoists during 2009. These do not include schools that were occupied by security forces at the time of attack. Most of the attacks occurred at night when students and teachers were not there”. This report does not cover the schools blown up by the Maoists in Chhattisgarh. This aspect is sometimes taken up by rights groups but always with the proviso that it is the government which is the prime cause: if the security forces did not occupy these buildings, the Maoists would have no need to blow them up. Thus, it is viewed as an “excusable” deviance in time of “war”.

The second aspect of the Secretary General’s indictment observes that the maoists “are recruiting and using boys and girls in their ranks”. “The UN Security Council has stated repeatedly that it will consider targeted sanctions, including arms embargoes, against parties to armed conflict that do not end their use of child soldiers”.

In an earlier 2008 report, "‘Being Neutral is Our Biggest Crime,'" Human Rights Watch  documented the use of children in the conflict in Chhattisgarh state. “The Maoists deploy children to gather intelligence, for sentry duty, to make and plant landmines and bombs, and to engage in hostilities against government forces. They organize children ages 6 to 12 into children's associations (bal sangams), indoctrinating, training, and using them as informers. Typically, children over the age of 12 are recruited into other Maoist ranks and trained in the use of rifles, landmines, and improvised explosive devices. Children in Maoist armed guerrilla squads (dalams) are involved in fighting with government security forces.”

As I have discussed in detail earlier, this is just the tip of the iceberg. It is abundantly clear from Maoist documents themselves that Maoist armed forces—the militias and the guerrilla army—are almost wholly composed of people who joined the forces as children. Shunning details, the basic picture is that sub-Saharan conditions prevail in the Maoist-controlled areas in Chhattisgarh. This raises unpopular—hence, undiscussed—questions about the character of Maoist “welfare” and “development” of the tribals; I set them aside. In this condition, tribal children are lured into the Maoist ranks—from lookouts, informers, militias to full-fledged guerrillas—with assurances of good food, clothing, and protection to their families.

No doubt, some of the earlier batches of children have reached adulthood—and higher ranks in the armed forces—by now. But their is no evidence at all that tribal adults voluntarily joined the Maoist ranks en masse. Again this raises uncomfortable questions about the character of “people’s army” and “people’s war” planted in public imagination by influential writers; I set these aside too. The enormous fact is that Maoist militias and guerrilla forces currently add up to about 60,000, with many more waiting and, to emphasize, almost all of these joined the forces as children, and a very large number still are children. Barsa Lakhmas.

And this has been going on for decades.

I am not aware of any sustained and significant voice against this massive crime from the rights groups in India (I am not denying the possibility of some ‘report’ buried deep in some archive or website). Why isn’t this issue at the centre-stage of the raging debates on the “Maoist problem”? Is it credible, for instance, that the rights people didn’t know about it? Writers affiliated to prominent rights groups have been visiting Bastar regularly; some of them have travelled extensively—in the company of guerrilla forces—in the Maoist territory. Didn’t they notice anything? The police have been arresting and killing Barsa Lakhmas in droves over the years. Didn’t they have anything to report? What explains the silence?

Could it be that the state prefers to remain silent because it will be both morally and legally difficult to unleash COBRAS, GREYHOUNDS, CRPF, Special Operations Forces, and the like on the Maoist forces if it became common knowledge that Barsa Lakhma is the target, even if he carries a rifle? Does the union home minister Mr. Chidambaram give more value to “clearing” operations than the lives of children?

Could it be that the rights groups such as PUDR, PUCL, APDR—not to mention direct Maoist sympathisers such as Roy—prefer to remain silent because they know that the only humanitarian option is to initiate a massive process that will return these children safely to their families, and, in that case, the Maoists will be left with no forces at all? Are the rights groups worried that any effective measure will lead to a “defeat” of the Maoists and, hence, a “victory” for the state? Is there a radical version of “Bush doctrine” at work here?

One Down, Run Down