HC Extends Rao's Surrender Date, Asks How He Can Be Sent To Jail Amid COVID-19 Surge?

A bench of Justices SS Shinde and NR Borkar dismissed the National Investigating Agency's (NIA) request for extending such date of surrender only by a week. The bench said in view of the rising cases of coronavirus across the state, it would not be wise to send the 83-year-old poet-activist back to prison. 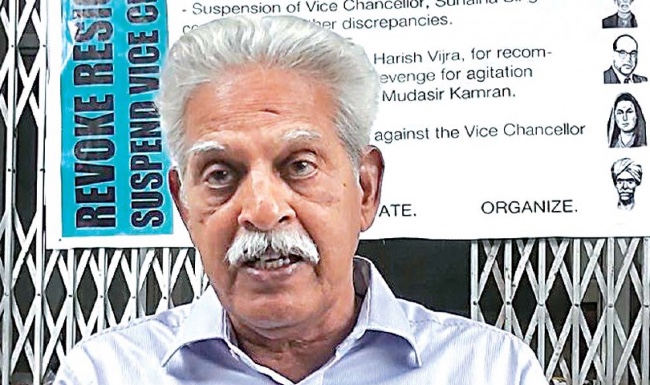 The Bombay High Court on Friday extended till February 5, the date of surrender for poet Varavara Rao, an accused in the Elgar Parishad-Maoist links case who is currently on medical bail, before Taloja prison authorities in Maharashtra.

Rao, who was lodged in the Taloja prison in Navi Mumbai as an undertrial, was granted temporary medical bail for six months in February 2021 by another bench of the HC that was led by Justice Shinde. He was admitted to the private Nanavati Hospital in Mumbai at the time for treatment of multiple ailments.

His date of surrender was scheduled for September 5, 2021, but Rao filed a new application through advocate R Sathyanarayanan and senior counsel Anand Grover seeking an extension of medical bail. The date of Rao's surrender has been extended since then by the HC on several accounts, including further time sought by the NIA, which is investigating the case, for filing replies to the new application and getting the octogenarian medically examined again, among others.

The NIA, however, has been opposing extension of Rao's medical bail, saying his treatment at Nanavati Hospital is now complete and as per doctors there, he does not need continued medical care at the private hospital currently. On Friday, NIA counsel Sandesh Patil told the HC that Additional Solicitor General Anil Singh had not been briefed in the matter and sought a week's time to complete the process. He urged the HC to grant the next date of hearing in a week's time.

The bench, however, said there was no point posting the matter for hearing next week and extending Rao's date of surrender only till then, considering the coronavirus pandemic. "Mr Patil, there is no point in keeping (the plea for hearing) next week. Experts say third wave (of coronavirus) may last for 50 to 60 days. This time, the police, health workers are testing positive very rapidly. The situation wasn't as bad the last time. So in such a situation, is it proper to send him (Rao) back to jail?" the judges asked.

"Of course, we are aware of the seriousness of allegations (against Rao), and the point of law involved. We will hear you (all parties) on the next date on merits," the bench said. Grover then told the HC that considering Rao's health condition, his old age and chronic ailments, the Telegu poet had also filed a fresh application before the HC seeking "permanent bail on health grounds." "We have also challenged some of the findings and medical report conclusions of Nanavati Hospital," Grover told the HC.

He referred to some reports, including a conclusion submitted in the HC by Nanavati Hospital doctors last month stating that Rao's vital parameters were stable and he did not need further medical care. The NIA had cited this particular report to argue earlier that Rao be sent back to prison while the high court continued to hear on merits his applications for further medical bail.

On Friday, the bench of Justices Shinde and Borkar said it will consider all contentions raised, including those in the new applications filed by Rao, on February 4, the next date of hearing. It, accordingly, extended the date of surrender for Rao till February 5. The bench also advised lawyers to stay safe and follow COVID-19 safety protocols.

"This is high time to take full care. The spread is very rapid this time. We are seriously concerned about all stakeholders in the judicial system...advocates, staff, clerks, their families. Here (in HC) also some of our colleagues have tested positive," the bench said. "But fortunately, in Maharashtra and Mumbai, the central and the state governments, the BMC, local bodies are all doing a wonderful job. We have to respect their work," it said.

The case relates to alleged inflammatory speeches delivered at the 'Elgar Parishad' conclave, held at Shaniwarwada in Pune on December 31, 2017, which the police claimed triggered violence the next day near the Koregaon-Bhima war memorial located on the city''s outskirts. The Pune police had claimed the conclave was backed by Maoists. The probe in the case, in which more than a dozen activists and academicians have been named accused, was later transferred to the NIA.