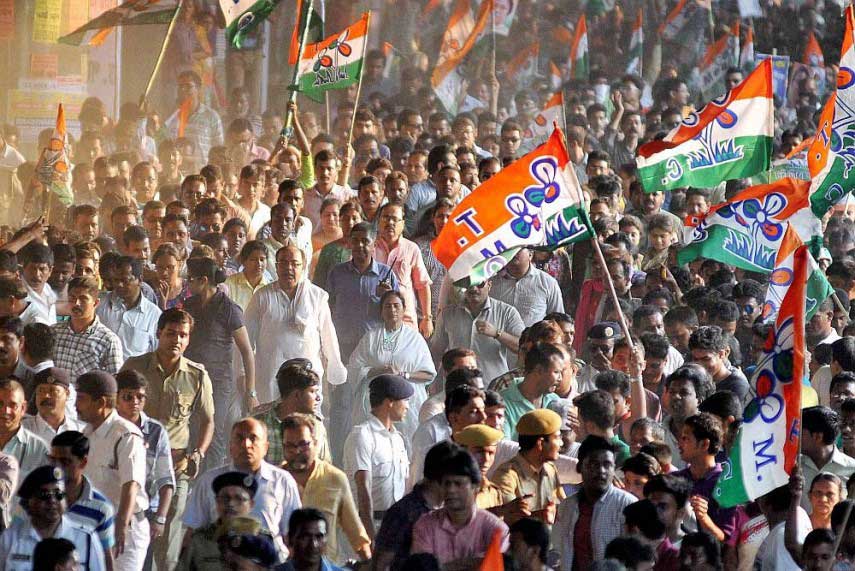 Back in Kolkata after a week. Something seems to have changed in the past seven days. And, it is not the dust cloud after the collapse of the Ganesh Talkies flyover. Suddenly there is a different buzz in the air after the first round of polling last Monday and doesn't look like it is going to be a cakewalk for Trinamool.

The CPIM- Congress alliance, which started on a tentative note seems to have found a glue. That may be partly due to CPIM dropping the fig leaf of anti-Congress-ism in sheer desperation to recapture their lost frontier. CPIM party-cadres have been mobilised to help in the campaign of Congress candidates. They are seen doing wall paintings for Congress with a CPIM by-line. The unthinkable happened — when Left supporters shouted "Rahul Gandhi Lal Salaam" at a rally — obviously with the tacit approval of comrades sharing the dais with the Congress scion.

Today's voters don't want to waste their franchise. What has really injected life into this alliance of strange bed-fellows is the non Trinamool electorate and fence-sitters — who had till recently, taken a second term for Mamata Banerjee as a foregone conclusion — sensing the possibility of an alternate formation. Even if they believe she will still form the government they are encouraged at the prospects of having a viable opposition instead of it being a walkover for Trinamool.

There are reports of low turnout at Mamata Banerjee rallies. In Bankura and Purulia one heard the crowd had to be ferried in trucks from one rally to another to ensure a respectable gathering. The situation in North Bengal is definitely more challenging and the middle belt of Malda, Murshidabad and Dakshin Dinajpur were never really strongholds of Trinamool. It appears while there may not be a strong anti-incumbency sentiment against Mamata per se, there is huge pent-up anger at local "Dadas". At many places, TMC had fielded lightweights or celebrities with no political background, leaving the constituency management to local leaders who had a field day. It is said that, Left had a unity of command and a clearly defined line of authority from the Block to the State Politburo. In TMC there are multiple rent-seekers on the ground, each with their own set of demands that took a heavy toll on ordinary residents and small time businessmen.

In the midst of all this, BJP is turning out to be the proverbial joker in the pack for more reasons than one. In what is increasingly appearing to be a national affliction the party seems very ambivalent on its position vis-à-vis Trinamool, leaving its voters confused. While "above the line" (to borrow a marketing phrase) central leaders like Narendra Modi, Amit Shah and Siddharth Nath Singh are making strong anti-Mamata noise and running an expensive, well- crafted TV campaign, even the most ardent BJP supporters will not be foolhardy to bet on their making it to a double digit score. Therefore, understandably, ground level activity is practically missing barring a few constituencies giving credence to the "match-fixing" theory. There are even speculations, after the first round, about Central Forces "looking away" from the booth.

What remains a critical variable is which way the incremental vote of 5-6% that BJP managed to get in the Lok Sabha on the back of the Modi wave will swing. Among this section there will be definitely those lately converted to the BJP agenda (not necessarily RSS ideology) who will stay on irrespective of the party's prospects. But, the icing on the cake could fall either way. But most likely, it will fall towards the Congress-Left alliance which is perceived to be more "balanced" in their appeasement of the neo-minorities as compared to TMC's over the top pampering.

Even more worrying than that for TMC would be any dent in its minority vote-bank that had decisively tilted the scales for them in the last Assembly and Lok Sabha Polls. There is a possibility that though the "border" population may stick steadfastly to Trinamool — expecting continuing patronage — the Left may be able to reclaim part of the "indigenous" Muslim Vote, which can dramatically change the equation.

Signs of everything not being as hunky-dory even a week or ten days ago can be gauged in the unexpected mellowing of Mamata Banerjee as seen in her election rallies of the past few days. For the first time she has been addressing issues like the "Narada" Sting by name and craving indulgence of the voters for "mistakes" she and her party may have committed, pleading she should not be denied their blessings for transient lapses

While there is a definite headwind, it is still early to predict a major upset. Political soothsayers have become more cautious. As one visiting senior journalist from the capital — who has been watching Bengal elections since the 80s — incisively observed, this time the usually vociferous Bengali voters are uncharacteristically reticent. What this intriguing silence portends will only be known after a month. But, certainly this election is turning out to be more thrilling than anyone had anticipated when the polls were announced.

Sandip Ghose is a roving Marketing and Media professional. The views expressed are personal and do not reflect the views of his employers. He is on Twitter @SandipGhose