In the northeast, heavy rains in Tripura rendered over 3,500 families homeless in the past 24 hours as the state was lashed by heavy rains. 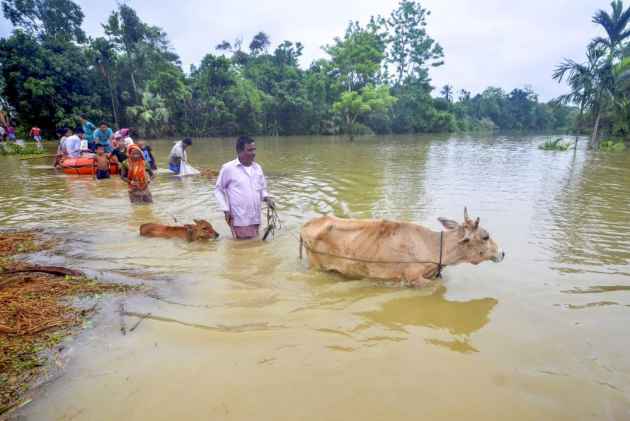 Floods triggered by heavy rains in Tripura and Manipur have rendered thousands homeless, even as North India reeled under blistering heat with the air quality in Delhi deteriorating beyond the "severe" level because of dust-laden hot winds.

Incessant rain in the past 24 hours has wreaked havoc in parts of the northeast, triggering flash floods and rendering thousands of people homeless in Assam, Manipur, Mizoram and Tripura, officials said.

The national capital experienced one of its hottest days with the maximum and minimum temperatures recorded at 41.2 and 34 degrees Celsius, respectively.

Dust-raising hot winds of around 35 kmph are likely to sweep the city, according to the MeT department forecast.

The Central Pollution Control Board data showed that the PM10 (particles with diameter less than 10mm) level was beyond "severe" at 778 in Delhi-NCR area and 824 in Delhi particularly, leading to hazy conditions and limiting visibility.

In the northeast, heavy rains in Tripura rendered over 3,500 families homeless in the past 24 hours as the state was lashed by heavy rains.

This morning, over 500 families were evacuated to six relief camps in West Tripura's Sadar sub-division as their homes were submerged in water, officials said.

Over 3,500 families are lodged in 89 relief camps as heavy downpour inundated their houses, according to the latest report of the State Emergency Operation Centre (SEOC).

In Manipur, incessant rains over the past 24 hours have triggered flash floods in the Imphal Valley with several low-lying areas in Imphal East, Imphal West, Thoubal and Bishenpur districts have been inundated, officials said..

The General Administration Department declared a holiday today for all government offices and educational institutions.

Incessant rain in the past 24 hours has affected as many as 1,48,912 people in Assam's 222 villages under eight revenue circles in the districts of Biswanath, Karbi Anglong West and Karbi Anglong East, Golaghat, Karimganj and Hailakandi, according to the Assam State Disaster Management Authority (ASDMA) report issued today.

Karimganj in the Barak Valley remained the worst-hit with the breaching of the Longai river at the Nayadhar area. The State Disaster Response Force (SDRF) has so far evacuated 124 people in the district. The authorites have opened 71 relief camps.

More rain has been forecast by the meteorological (MeT) department over Meghalaya and Assam, with heavy to very heavy rain at isolated places over Nagaland, Manipur, Mizoram and Tripura.

Dry weather prevailed in Uttar Pradesh, with the MeT predicting rains or thundershowers accompanied by gusty winds at isolated places in eastern parts of the state tomorrow.

Patiala recorded the season's hottest day as severe heat prevailed there, it said.

Churu was the hottest place in Rajasthan with a maximum temperature of 42.3 degrees Celsius with hot weather conditions prevailing in the state, the MeT said.

The lower hills of Himachal Pradesh reeled under scorching heat as day temperatures rose by a few notches. Una in the Shiwalik foothills was hottest place in the state with a maximum temperature at 43.4 degrees Celsius.

The winter capital of Jammu and Kashmir witnessed another scorching day today with the maximum temperature settling at 43.3 degrees Celsius, 4.3 degrees above the normal.

Heat wave, however, is likely to recede on Friday as the MeT office had predicted wet weather in most parts of the Jammu region later this week.