The nine judges unanimously overruled the two earlier judgements of the apex court that Right to Privacy is not protected under the Constitution. 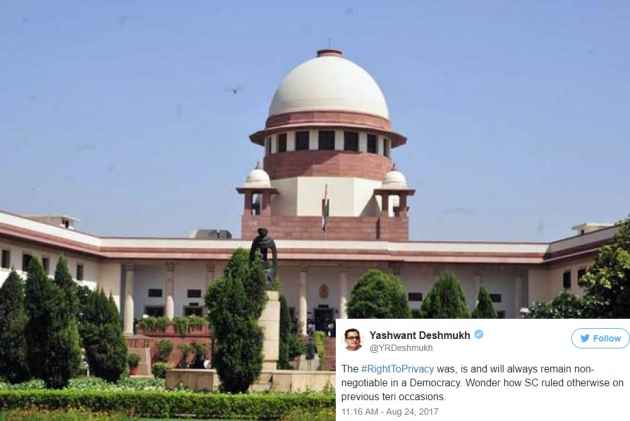 The Supreme Court on Thursday said that Right to Privacy is a Fundamental Right as guaranteed by the Constitution while hearing a batch of petitions in the Aadhaar case.

A nine-judge Constitution bench headed by Chief Justice J S Khehar ruled that "right to privacy is an intrinsic part of Right to Life and Personal Liberty under Article 21 and entire Part III of the Constitution".

The nine judges unanimously overruled the two earlier judgements of the apex court that Right to Privacy is not protected under the Constitution.

Thank u SC for this v important judgement

Channels were giving credit to Modi for #TripleTalaq ! Now will they use same words for Modi Ji on #RightToPrivacy verdict by SC ?

#RightToPrivacy is more powerful than we can understand at the moment. It's the perfect time to fight for greater rights for our people .

a tight slap to those who said indian don't have #RightToPrivacy .... thank you #SupremeCourt pic.twitter.com/nbgilHieZY

The #RightToPrivacy was, is and will always remain non-negotiable in a Democracy. Wonder how SC ruled otherwise on previous teri occasions.

SC: "Privacy is a fundamental right under the Indian Constitution".