Here's Why Kamal Haasan Is Unsure About Political Alliance With Rajinikanth

"My politics will definitely not be saffron," he said. 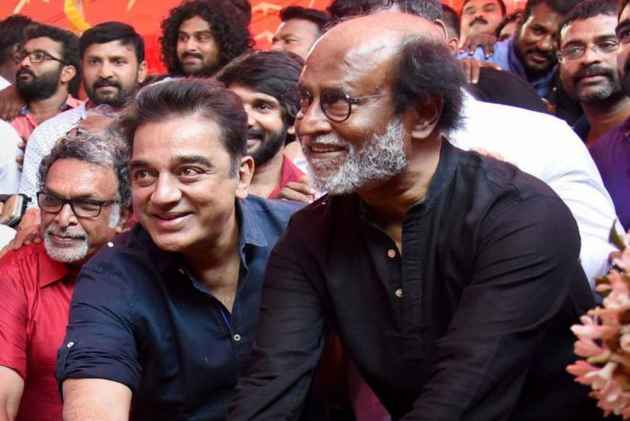 Ace actor Kamal Haasan talked about the alliance with veteran actor Rajinikanth and said that a tie-up seems unlikely as of now as latter has a "hue of saffron" in his politics.

"There is a hue of saffron in Rajni's politics. If that doesn't change, then I don't see an alliance with him," said Haasan, during the launch of his website, naalainamadhe.maiam.com, at Harvard University.

"My politics will definitely not be saffron," he added.

The actor mentioned that both of them are good friends, but "politics is different".

Haasan also said, the reason for starting his own party is that he does not want to work with any of the existing parties.

Speaking about the website, the actor said that it has been designed in a manner wherein people from all sections can participate.

"People can register themselves under the topics of health, education,environment, agriculture, finance and many more sectors," he added.

Lamenting that all is not well with his home state, Hasaan announced his plans to adopt a village in every district of Tamil Nadu.

"I am announcing a plan of adopting a village in every district of Tail Nadu... With the vision of making them the best villages in the world," Hasaan said in his key note address at the annual Indian conference of the prestigious Harvard University.

"All is not well with Tamil Nadu," he said, slamming the current lot of political class in his state.

Hasaan, who recently announced his foray into electoral politics, said that he will begin with one village and then scale up it to every district of Tamil Nadu.

Responding to a question on love jihad, the actor said, "I think that a new revolution is on its way. I do not know about jihad, but love would triumph hate."

Hasaan said Delhi chief minister and Aam Aadmi Party head Arvind Kejriwal met him in Chennai and offered an alliance with his party.

"I intend to take it (the experience) not only from Mr Kejriwal but from others as well," he said.

Earlier, in his key note address, Hasaan rued that there is status quo and mediocrity in Tamil Nadu.

Confident of raising funds for the elections, Haasan called upon the Tamil community across the world to come up with ideas.