Hero has tuned the 450 RR to take on the most challenging Dakar yet. Let's take a quick look at what they are 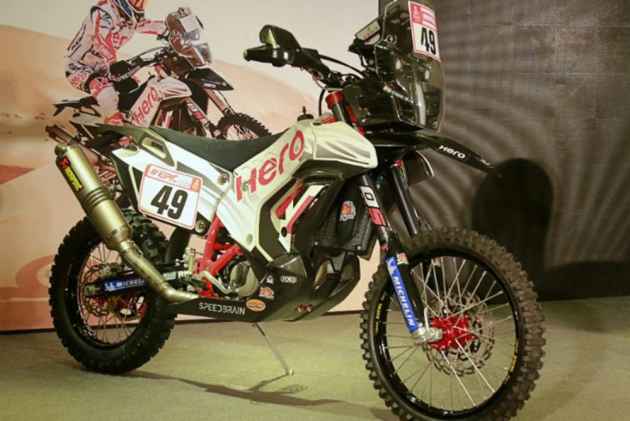 More stories from Karan
View All

Hero’s 450 RR, which is a refreshed version of the Speedbrain 450 Rally, is all set compete at Dakar 2018 in South America. This time though, Hero got to test the newly tuned machines in a race at Oilibya and Merzouga, which helped them to further tweak the motorcycle to the rider’s necessities and also to take on the gruesomely challenging route starting from Lima in Peru, onto La Paz in Bolivia and then finishing off in Cordoba, Argentina.

Since Dakar bikes are meant to handle an unimaginable set of terrains they have quite a tall stance and not so appealing looks. But then again, these bikes are purpose-built and not intended to lure audiences. The front features a tall windscreen that also covers the newly designed LED DRLs and headlights. Unlike road bikes, there is a navigator placed to guide the rider through the route. In order to better tame the terrain, a high-raised handlebar is provided with hand guards. A 29-litre fuel tank is placed underneath the sleek and long buckskin seat. Developed by Michelin, 21-inch 90/90 section front and 18-inch 140/80 section rear tyres are wrapped around the spoked wheels. Braking is managed by 298mm petal discs up front and a 220mm petal disc at the rear.

As you know by now, every Dakar race is a very unforgiving challenge and to finish the race in time you need to be clear of the route while still being on top of your performance level. This is where the navigator comes in as it offers a host of information and directions in order to complete the 9000km rally in South America. It replaces the instrument cluster and is mounted on what is called the navigation tower. It is a complicated affair with a range of readings popping up on the screen, and it gets challenging for the rider to cope with while riding non-stop.

The 450 RR is powered by a DOHC, liquid- and oil-cooled 449.5cc, single-cylinder engine. The limitation to the displacement is due to the 500cc displacement norm in Dakar. The six-speed gearbox gets a hydraulic clutch, with power being transferred to the rear wheel via an O-ring chainset. The Speedbrain produced around 55PS of power and in our interview with Dr Marcus, he mentioned that the power figures have gone up marginally, with a stronger mid-range now. However, there is no clear indication on the exact figures.

There is no change in the construction of the 450 RR when compared to the Speedbrain 450, and the new Dakar bike continues to showcase the same chassis components.  The body itself is carbon-kevlar composite, while the chassis is a chromium-molybdenum steel frame. However, the rake and trail of the bike have been reworked to provide a better view of what's ahead and to make it quicker to steer. The previous bike weighed under 140kg (dry) and this is no different. The 450 RR comes with an Akrapovic titanium exhaust designed to reduce weight on rally bikes with no compromise on power. Also, since it's designed for rally bikes, it not only looks good on the RR but also sounds ballistic. To aid to the rider’s needs, there is an additional map holder and three water storage tanks, including a one-litre tank placed on the front side of the bash plate. There are two fuel tanks as well, with the main tank placed under the seat and a smaller additional tank above the engine to make it more flickable with better weight distribution. The Hero Rally Team seem to have a quite a strong contender in their hands in the form of the 450 RR. Participating in races like Oilibya have also given them the ability to further understand and tweak the machine to take on the Dakar race challenge as it’s a lot more agile and the engine now feels a lot more eager than before. So, what remains to be seen is how the new version proves itself in South America.