The most significant issue on which President’s attention was sought was related to state’s vexed demand for setting-up an army regiment on the lines of Punjab, Bihar, Kamoun & Garhwal, Jat and Sikh regiments keeping in view a high presence of Himachalis serving the army and highest contributions of the state in the armed forces . 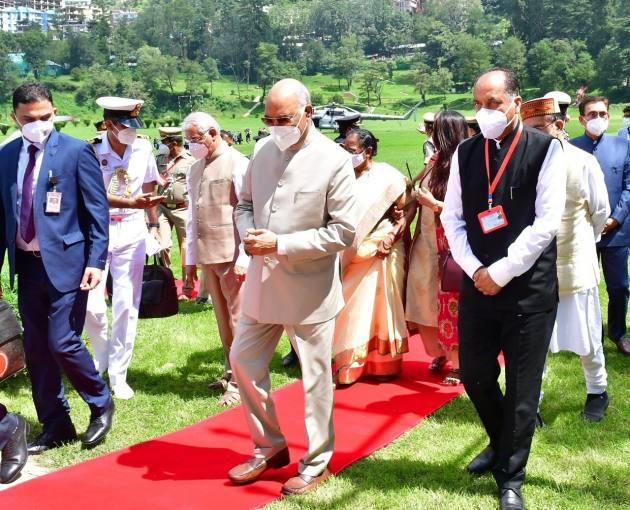 Entry of imported apples from foreign markets is jeopardizing Himachal Pradesh's apple economy worth Rs 5,000 cr. But that was not the only issue which leader of opposition Mukesh Agnihotri tried to flag to the President Ram Nath Kovind on his four-tour, which ended on Sunday here.

President Kovind, who was the state’s special invitee to address the special session of the state assembly on completion of the state's 50 years, praised Himachal Pradesh for its remarkable development since 1971,when it attained full statehood and steadily progressed as a notable  ‘model’ of hill development.

Agnihotri,  who shared the stage with the President in the state assembly, along with state’s Chief Minister Jai Ram Thakur, demanded a complete ban on import of the foreign apples or raise the import duty as a step to make apple growers get proper price for their produce in the open markets.

But, setting this issue aside, the most significant issue on which President’s attention was sought was related to state’s vexed demand for setting-up an army regiment on the lines of Punjab Regiment, Bihar Regiment,Kamoun & Garhwal regiments, Jat and Sikh regiments keeping in view a high presence of Himachalis serving the army and highest contributions of the state in the armed forces .

Agnihotri said state ,which has almost 1.20 lakh persons in the army and more than 1.30 lakh ex-servicemen has made glorious contribution to the nation.Some of the gallant soldiers born in Himachal Pradesh made their supreme sacrifices.Few of these like Capt Vikram Batra ,the Paramvir Chakra (PVC) awardee , Kargil war hero Captain  Saurav Kalia and another PVC awardee of the Kargil Subedar Sanjay Kumar  are notable ones.There is a need to consider this demand ,he said .

Agnihotri reminded Dhumal having been vociferous on the issue for years ,and now it’s also the duty of Union Minister for Information and Broadcasting Anurag Thakur--who had reached Shimla to attend the Golden jubilee function,  to take it forward.

Former Chief Minister Prem Kumar Dhumal,who was first to make this demand in the Parliament in 1990s, told Outlook that during his term as Chief Minister state assembly passed separate resolutions urging the centre to accept Himachal Pradesh demand.

“ I was told by the centre at that time practice of setting-up regiments in the names of the states have been discontinued .Thereafter , I also wrote to the centre suggesting for a Himalayan regiment ,which should include youths mainly from the hill states viz J & K, Uttarakhand and Himachal Pradesh “ he recalls.

The Congress leader later revealed that the President Kovind had asked him to handover a copy of his speech so  as he could get it examined at his level in Delhi.

Agnihotri also referred to Himachal Pradesh’s pioneering step to impose a complete ban on the forest felling inorder to preserve and save the forest wealth in the interest of the nation.

“But ,the centre,so far, has not compensated the state for its contribution towards the nation .We should be given a suitable financial package in lieu of the forest wealth ,which the state has been preserving  to cause the environment and climate change mitigation step” he suggested.

He recalled that earlier two Presidents APJ Abdul Kalam and Pranab Mukherjee had also addressed the state assembly at different occasions and Ram Nath Kovid will be the third President to address the House --which has seen momentous moments during the pre-and Post Independence days.