UK-based Alyia Phelps-Gardiner Krumbiegel, his great grand-daughter, said, she was in tears when she saw the pictures of the demolition site. 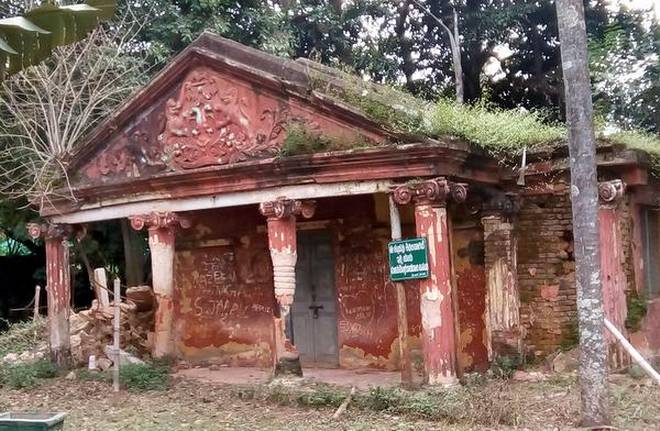 More than 100-year-old Krumbiegel Hall in the iconic Lalbagh has been demolished, leading to grief and outrage among heritage lovers and the great granddaughter of the architect, whose had enhanced glory of the famed garden.

The Bengaluru chapter of Delhi-based INTACH, expressing its shock over the demolition, has shot a letter to the Karnataka government, urging it to create a fitting memorial to Gustav Hermann Krumbiegel whose significant horticultural contribution helped the city earn the moniker of 'Garden City'.

UK-based Alyia Phelps-Gardiner Krumbiegel, his great grand-daughter, said, she was in tears when she saw the pictures of the demolition site.

"I was so upset, I cried and cried. The Hall was a link to connect to his life and legacy. It was a lecture hall and he used to spend a lot of time there during his appointment as the superintendent of the Lalbagh. I only have some old pictures of him sitting inside to comfort myself now," she told PTI over phone.

The iconic building, which had fallen into disrepair owing to years of neglect, was brought down on November 22 by the Horticulture Department, which maintains the historic park.

Ironically the demolition coincided with the World Heritage Week (November 19-25).

A large portion of the inside of the Hall, after suffering years of neglect and decay had collapsed earlier.

Sources in the Horticulture Department said, the building was knocked down because it had become "too old and too weak to restore".

Meera Iyer, Bangalore Convener of the Indian National Trust for Art and Cultural Heritage, blamed the Horticulture Department for the fate the building met with.

"They (Horticulture Department) say it had become weak and dangerous, and so could not be restored.

"I had gone there on November 23 along with few of my architect friends to assess the situation of the building, but to our horror, we saw it had vanished. A JCB stood on the rubble of what was once a celebrated landmark," she rued.

Bengaluru-based architect Yashaswini Sharma, who has been following up on the Hall case, said, a proper legal framework is needed to protect the structures of historical importance not covered by ASI or state authorities.

Sharma said she has endorsed the letter that INTACH has sent to the top officials of the department.

"We have urged the government to come up with a fitting memorial at the very same site. And, that a city-based architect should be chosen by competition so that the new structure is in harmony with its surroundings and respects the heritage of the park," she told PTI.

"It was a terrible news here abroad."

"Problem with policy-makers in most cities in India is that they value demolition and rebuilding, over restoration, even though conservation costs much lower.

"Krumbiegel was a well-known figure and with the demolition of the hall, we as a society have erased a chapter of heritage of our own city," he rued.

Alyia, who was born in England in 1961, says, "My great grandfather was a German and my great grandmother British, but they both made India their home. They loved India."

"Now after losing the hall, his voice I think I can hear. And, it's telling us to rally together and save what is left now," she said.

Describing the structure, Sharma said it had a handsome architecture and a pedimented facade, bearing the Mysore royal family insignia Gandaberunda on top.

"The Hall had a Mysorean interpretation of Indo-Classical colonial architecture and four Ionic columns in the front, which had a granite core. We have lost an important piece of history. It's tragic, but we need to fight for better laws for preservation," she said.

Krumbiegel, born in 1865, made a significant contribution to architectural and horticultural landscape of Bengaluru, Mysuru and Vadodara.