Hollywood celebrities were among the thousands forced to evacuate as the fire engulfed in large patches across California. 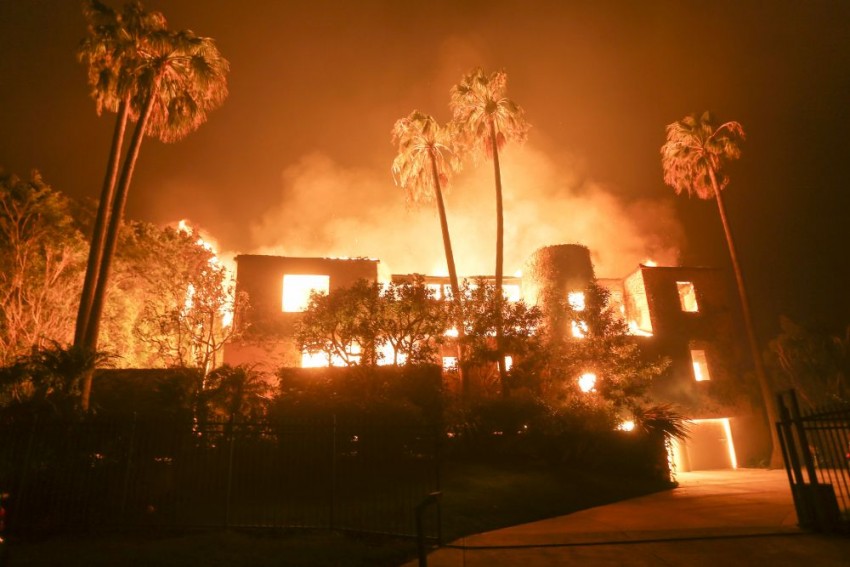 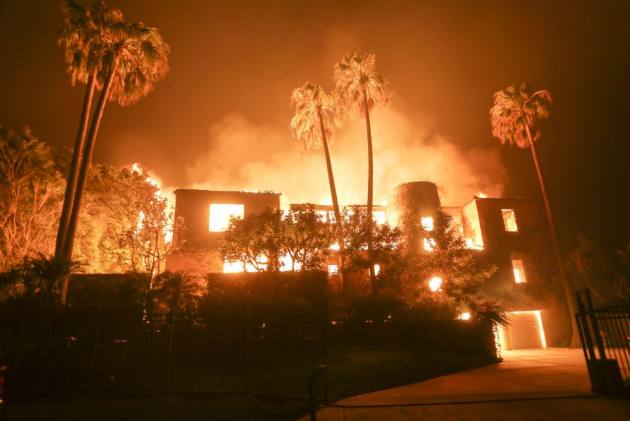 Hollywood celebrities Lady Gaga, Kim Kardashian West, Rainn Wilson and Melissa Etheridge, among others, have had to flee their homes as wildfires rage on in California.

They were among the thousands forced to evacuate as the fire engulfed large patches of Malibu, Calabasas, Paradise and Thousand Oaks, reported variety.com.

Transgender activist Caitlyn Jenner's Malibu home has burned down to the ground, according to TMZ. Many other Hollywood figures such as Ellen Pompeo, Cindy Crawford and Marcy Carsey live in the area.

All of Malibu, home to numerous celebrities and Hollywood executives, has been ordered to evacuate.

Singer-actress Lady Gaga posted on Instagram on Friday afternoon that her Malibu estate was evacuated earlier in the day.

"I am thinking so deeply for everyone who is suffering today from these abominable fires and grieving the loss of their homes or loved ones. I'm sitting here with many of you wondering if my home will burst into flames. All we can do is pray together and for each other. God bless you.

I am thinking so deeply for everyone who is suffering today from these abominable fires & grieving the loss of their homes or loved ones. I’m sitting here with many of you wondering if my home will burst into flames. All we can do is pray together & for each other. God Bless You.

"Thank you to the fire fighters, police, first and emergency responders for doing above and beyond everything you can do to help us. You are true heroes," Gaga tweeted.

Thank you to the fire fighters, police, first and emergency responders for doing above and beyond everything you can do to help us. You are true heroes. #CaliforniaFire

"Pray for Calabasas," Kim wrote on an Instagram story. "Just landed back home and had 1 hour to pack up and evacuate our home. I pray everyone is safe."

Trying to get my mind off of this fire and snuggling with my niece. We are all safe and that’s all that matters pic.twitter.com/RPPBTsKNd6

Her sister Kourtney also posted about the emergency on her Instagram story, writing, "I pray that everyone is kept safe and protected from these fires. No Calabasas tonight."

Kim later updated on Twitter that while the flames hit her Hidden Hills home, the fire there appeared to have been contained.

I heard the flames have hit our property at our home in Hidden Hills but now are more contained and have stopped at the moment. It doesn’t seems like it is getting worse right now, I just pray the winds are in our favor. God is good. I’m just praying everyone is safe ðÂÂÂðÂÂ¼

Cher, who said she had lived in Malibu since 1972, tweeted that the wildfire was coming close to her home, although she said she was not on the property.

"Friends houses have burned. I can't bear the thought of there being no Malibu," the singer posted.

I’m worried about my houseðÂÂ¥, but there is nothing I can do.
Friends houses have burnedðÂÂÂðÂÂ»
I can’t bear the thought of there being no Malibu I’ve had a house in Malibu since 1972ðÂÂ­

Actor Mark Hamill wrote the flames are dangerously close to his house, but he and his family members were safe and rooting for "fearless firefighters in their battle versus mean Mother Nature", variety.com reported.

As of Friday morning, more than 20 million people from Southern California to Northern California were under red flag warnings due to several wildfires across the state.  The Weather Network on Friday uploaded a video of the raging wildfire on Twitter.

Terrifying moments captured on camera show a 'firenado' form as the #CampFire rages on in Butte County, California. At least 5 people have died in Paradise, a town 'destroyed' by flames according to fire officials https://t.co/vsiLfoDYrH pic.twitter.com/BpN99cJiw1

Actor Will Smith posted several videos to his Instagram Story about the fire, saying that his family home was about eight miles away. "That is very scary. We are prepared to evacuate as soon as we get the word. If you are in an evacuation zone, go now."

Wilson tweeted that he had been forced to evacuate, and that his pigs and dogs are okay. He also asked for prayers for the victims of the Thousand Oaks shooting, noting that the same area is now being affected by the wildfires.

Filmmaker Guillermo del Toro evacuated from his property, where his large collection of horror memorabilia is stored.

MGM TV chairman Mark Burnett and his wife, producer-actress Roma Downey, were among the Malibu residents who heeded the call for evacuations. Downey posted a photo of billowing smoke shortly after 9 a.m. and said she was leaving her home off the Pacific Coast Highway with her two dogs in tow.

Scott Derrickson, the director of "Doctor Strange", tweeted that his home was destroyed in the fire. He had evacuated and was safe, he added.

Actor Orlando Bloom posted on Instagram a shot of a raging fire near his street.