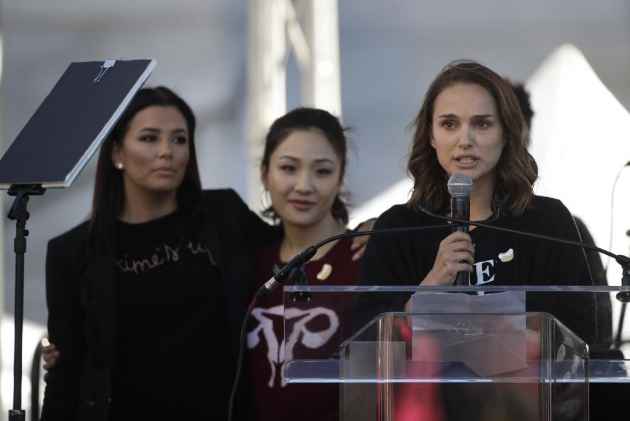 Amid discussions of sexual misconduct in Hollywood, Oscar-award winning actress, Natalie Portman, has revealed that she experienced "sexual terrorism" at the age of 13.

Portman revealed that she was sexually terrorised as a child after the shooting of her first feature film, reports Contactmusic.com.

The Academy-award winning actress, who was present at Women's March in Los Angeles with fellow actresses Eva Longoria and Constance Wu, spoke about her terrifying experiences growing up as a child star.

She said, "I turned 12 on the set of my first film 'Leon: The Professional', on which I play a young girl who befriends a hitman and hopes to avenge the murder of her family. The character was spontaneously developing and discovering her womanhood, her voice and her desire. At that moment of my life, I too was discovering."

She described other instances of sexual objectification that she faced soon after the film's release, including movie reviewers talking about her "budding breasts" and her local radio station starting a countdown to her 18th birthday to keep track of "the date that I would be legal to sleep with."

The actress added, "I understood very quickly, even as a 13-year-old, that if I were to express myself sexually, I would feel unsafe. And that men would feel entitled to discuss and objectify my body to my great discomfort."

The 'Black Swan' star also explained how she changed the way she presented herself in public, rejecting roles which could sexualise her and building a reputation as "prudish, conservative, nerdy, serious".

"I felt the need to cover my body and to inhibit my expression and my work in order to send my own message to the world: that I'm someone worthy of safety and respect. The response to my expression, from small comments about my body to more threatening deliberate statements, served to control my behavior through an environment of sexual terrorism," explained Portman.

The actress was one of many famous faces who took to the stage to share her views including Scarlett Johansson and Mila Kunis.
(ANI)