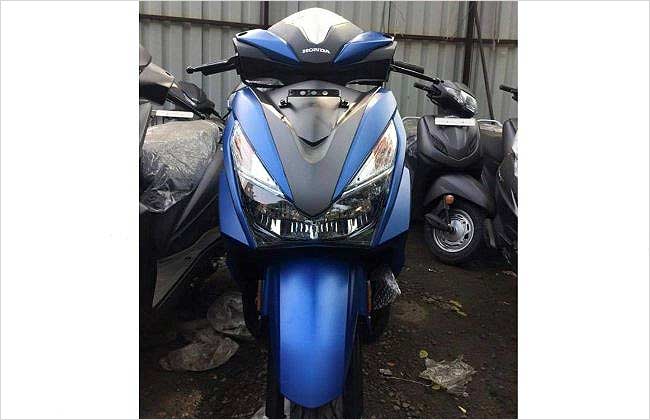 Honda Motorcycles and Scooters India have sent out a mailer citing that it will commence bookings for its new automatic scooter, the Grazia, on October 25, 2017. While they have not divulged technical details or any images of the scooter, they do mention that the scooter is intended for the younger consumer.

The Honda press release mentions that the Grazia has been developed as an advanced urban scooter with a sharp design tailormade for the young and cosmopolitan crowd.

While Honda has not shared any images, one eagle-eyed reader has spotted a new scooter in a showroom parking lot/stockyard. The new scooter has design cues from the Honda Dio in the form of a large front apron-mounted headlamp with equally large turn indicators mounted atop. The headlamp gets two bulbs which should give a good light spread. The front apron is wider than the Honda Activa’s, has sharp lines and looks premium courtesy the matte blue dual-tone paint job and chrome accents.

The spied scooter gets a large, stacked analogue and digital instrument console and, going by the lack of headlamp switchgear, Automatic Headlamp On as well. For suspension, the scooter gets telescopic front forks, a big update from the Activa and Dio’s linked setup.

For propulsion, Honda will, in all probability, stick to their tried and trusted 110cc single-cylinder, air-cooled motor that makes 7.92PS and 8.91Nm of torque. Considering the scooter’s premium positioning, they might even switch to the 125cc mill from the Activa 125 which makes 8.63PS and 10.54Nm of torque.

We expect the Grazia to be a premium offering, and as such, command an asking price closer to the Activa 125