Honda To Launch The Grazia On November 8

Honda has started accepting bookings for its all-new 125cc scooter 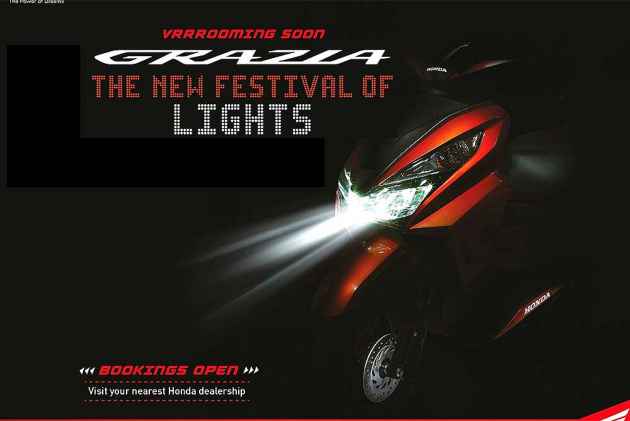 Honda is all set to launch its premium scooter in the Indian two-wheeler market. Dubbed the Grazia, the all-new scooter is expected to be a 125cc alternative to be positioned above the Activa 125. We expect the scooter to retail between Rs 60,000 and Rs 65,000. Going by Honda’s official teaser images and spy shots, the new scooter gets a large body-mounted headlamp with two equally large turn indicators mounted above it. The headlamp gets LED units a brighter beam spread.

The design features sharp lines and creases indicating its intent for a younger crowd. The bodywork uses plastic panels instead of metal, so its kerb weight should be less than the Activa 125. Colour options include a premium matte blue paint job. The instrument cluster is an analogue and digital unit with a large digital display below.  The premium looking switchgear is concentrated to the left side of the handlebar. The ignition key has extra provisions, possibly for remote seat unlocking. The scooter might also get an external fuel filler cap.

The scooter gets a large 12-inch front wheel equipped with a disc brake. Honda might stick with the 12-inch front and 10-inch rear wheel configuration. The front disc brake could be offered as an option while the standard scooter might get drum brakes on both wheels with CBS (Combi Brake System) as standard fitment.

The Honda Grazia is expected to be launched with the same 125cc, single-cylinder motor that does duty in the Activa 125. This motor makes 8.5PS at 6500rpm and 10.54Nm of torque at 5000rpm. We expect the Grazia to carry the same state of tune.

The Grazia should come as a breath of fresh air due to its styling and premium bits. The Honda Grazia will soon face competition from TVS’ new 125cc scooter, which was spied testing recently, and is expected to be launched at the 2018 Auto Expo in February.