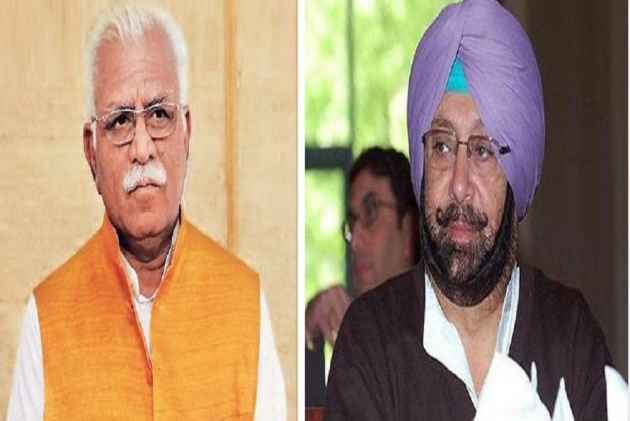 A blame game erupted between the chief ministers of Haryana and Punjab on Thursday,

over the arrest of Honeypreet Insan who claims to be the adopted daughter of the jailed Dera Sacha Sauda chief.

While Haryana Chief Minister Manohar Lal Khattar accused the Punjab Police of not sharing information with its Haryana counterpart ahead of her arrest on October 3, Punjab CM Amarinder Singh alleged that the allegations were an attempt to shift attention from the situation in Haryana.

He was responding to questions about Honeypreet appearing before some media channels hours ahead of her arrest.

After Honeypreet's interrogation, many things would come out in the open, he said adding that innocent people would not be punished and guilty would not be spared.

On being asked whether any political leader was involved in shielding Honeypreet, he said that it was not appropriate to comment on the issue as the interrogation was underway.

"As things come, they will become clear," he said.

However, again commenting about Punjab Police, Khattar said, "I already said this about Punjab police that their people and their cars were present, something smells fishy," he said.

He was apparently referring to a raid by the Haryana Police in Rajasthan to nab Honeypreet on September 22.

Meanwhile, Aamrinder Singh lambasted Khattar for raising questions about the role of the Punjab Police in the case.

Singh asked Khattar to refrain from such alleged fabrications to "shield his own government's failure" in the Dera Sacha Sauda case.

He alleged that after trying "unsuccessfully to pin the blame for the Panchkula violence on the Punjab government", Khattar was once again trying to divert public attention from the collapse of the law and order in Haryana since the rape conviction of Dera chief Gurmeet Ram Rahim Singh.

Rejecting claims of any involvement of the Punjab government or any of its institutions in the episode leading to Honeypreet's arrest, the Punjab chief minister said if the state police had any information about her they would have shared it with their Haryana counterparts.

Amarinder Singh, in a statement hours after Khattar's remarks, said reports, in fact, claimed that a senior Haryana police officer had known about Honeypreet's whereabouts for several days but had failed to arrest her.

He alleged that instead of probing the role of his own officials in the affair, Khattar was trying to shift focus to Punjab.

He trashed Khattar's charges that the Punjab Police had failed to give intelligence inputs to the police in the neighbouring state.

Amarinder Singh said the Punjab Police had been giving regular inputs to their counterparts in Haryana even before the hearing in Ram Rahim's case in Panchkula. He claimed that the Haryana government and police had failed to take cognisance or act on the information.

The chief minister said though the Punjab Police was not pursuing Honeypreet as she was not wanted in any case in the state, there was no question of shielding her.

He said Khattar should focus on taking the case to its logical conclusion and on maintaining law and order in Haryana, instead of allegedly wasting time and energy in concocting false charges against the Punjab government and the police.