An English novel profiling Kerala’s pastoral life essays the psyche of a middle-class woman of the last century. Her life does undergo its share of turmoil, but the overall take from Shanti is the bell-metal shine of the harvest festival. 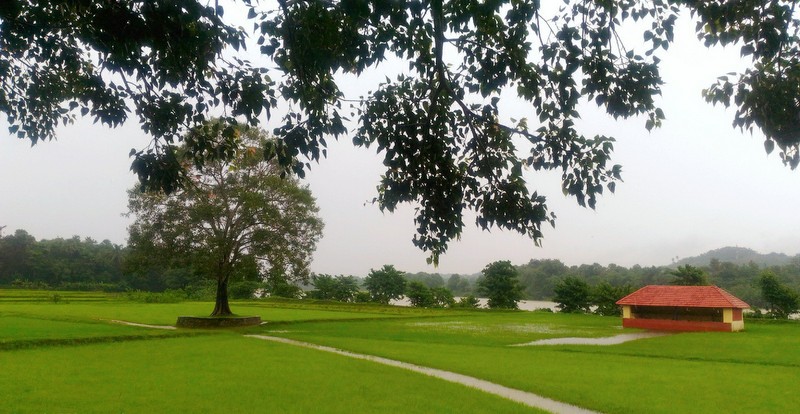 When the monsoon-darkened sky finally brightens up to illumine its daytime greenery, Kerala senses Onam in the air. There is moisture left from three months of June-August rain, but the tropical stretch bears freshness in its warmth. This turn of season typically adds to the beauty of the sight, sound and smell across the swathe between the Arabian Sea and the Western Ghats—as is evident from the opening a period novel released recently.

Shanti, which seeks to profile 20th-century life in the southern state, begins with a scene about a frolic-filled ritual for kids. “A team of five girls climbed up the mountain-side, picking flowers. It was the month of Chingam and they filled little wicker baskets hanging from their necks with numerous flowers of the season to prepare pookkalam,” notes the first paragraph of the 82-page work in English by Vijayan A.V, a retired professor.

For all the idyllic description, Shanti subsequently strays on to turbulent terrains, throwing light on the evolution of a human mind from childhood innocence that finds extension in youthful free-spiritedness, then hardens in the wake of a personal tragedy and mellows towards the climax. It’s, in a way, the journey of an average middle-class Malabar woman and her multi-stage existence straddling pre- and post-Independence era. The protagonist’s story takes a dramatic turn when the mother of three becomes a widow in her prime, a decade after her marriage to a handsome and level-headed man in a village not very far from hers. The tragedy puts temporary brakes on the otherwise smooth life of Shanti, which is the central character’s name too. She slips into depression, but manages to recover. If the loss of her husband initially numbs her amid the knowledge that she is pregnant for a fourth time, the lady goes on to devise ways to fight the stalemate that lingers even after the delivery—and emerges strong enough to gain a local heroine’s status by middle age.

The looks of Kerala during the Onam-time Chingam month comes a second time in the novel, with the teenaged heroine noticing that it was the previous year, while collecting flowers to arrange them in the front yard of the house as a circular carpet, she had met her future spouse. “The paddy had turned a golden hue and I loved going out enjoying the countryside decked out in all sorts of colours…” Interestingly, this is from chapter five—and it is only the previous chapter that the novel turns into first-person account. And that coincides with the marital life of the protagonist. It delineates a night that can be defined ‘adventurous’ even by contemporary Kerala standards: the newly-wed Shanti joins her husband Anandettan in his expedition to fish in the family temple pond down one corner of their sprawling sylvan compound with the broad Nila river adjacent to it. There is added excitement what with the couple chancing upon two men already busy in the tank—and the husband overpowering the thieves and returning with the stolen fish salvaged.

Shanti retains her tomboy spirit, what with running up and down the stairs, thus helping the maids transfer the harvested paddy from the courtyard to the granary, which is an attic on the third floor. It’s here that the string of words “possibility of a miscarriage if I overstrained” comes, leading the reader to realise that the woman is pregnant. The author had earlier skirted any hint at physical touch in Shanti’s wedding night, saying she “fell in with the room almost immediately” and then, the next morning feeling, “thrilled by the spectacular view” while peeping out through the window at paddy fields spread in all directions in the village near Kuttipuram.

If one mistook this for prudishness on the part of the novelist, Vijayan comes up later with a detailed foray into the woman’s changed attitude towards sex. Shanti’s gay abandon nature comes in greater clarity when she happens to compare the cultural differences between her own home and the one that has adopted her as a daughter-in-law—a perennial subject for most females in Kerala today as well.

It was in a trip to the Himalayas that Anandettan dies in a natural disaster. Shanti turns into a complete recluse, but sooner than later—courtesy her mother’s support—succeeds in breaking the self-built shell around her. Variety marriage proposals follow; there is even a womaniser relative chasing her once. A determined Shanti weathers all the troubles. The chapters narrating this phase of her life are (deliberately) longer than the previous ones.

The book, brought out by Authors Press and breezy as the Onam air, could have avoided a few typos and laxity in punctuations. Yet they don’t overall check the pleasure of the 21st-century reader to appreciate someone’s moral success in life—and a trip down fantasy lane banking on agrarian life, which is integral to Onam.