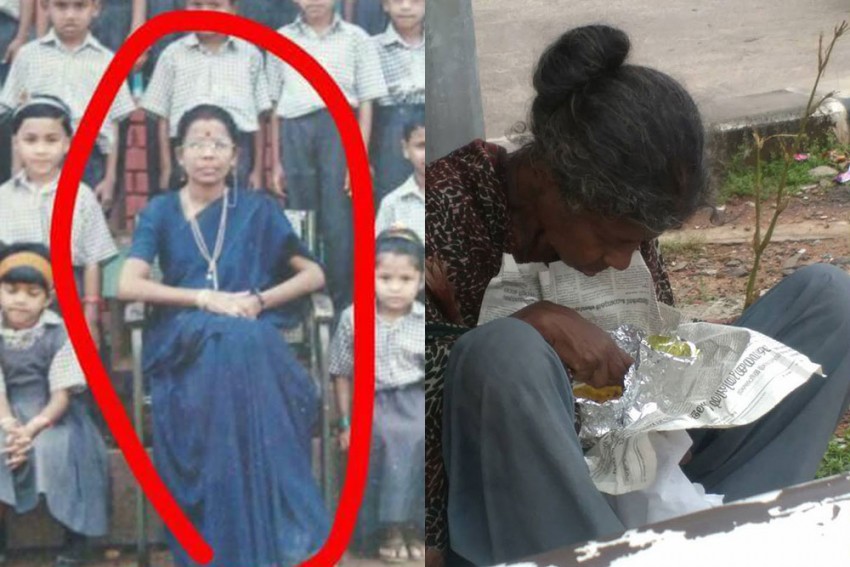 Courtesy: Facebook
Thufail PT 2017-11-13T13:25:31+05:30 How A Retired Kerala School Teacher Found Begging At Railway Station Was Rescued And Reunited With Her Students 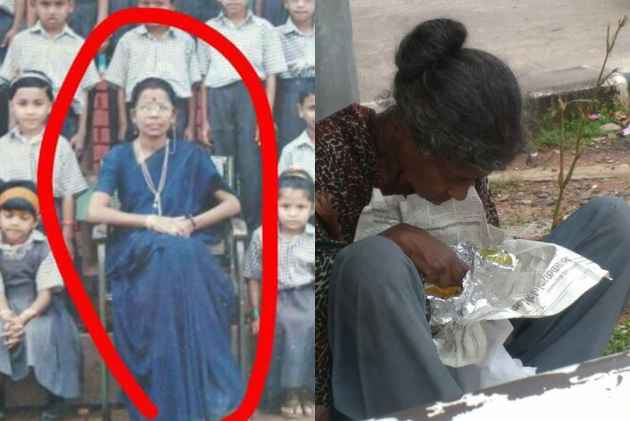 When Vidya M.R, a government employee in Kerala’s capital, Thiruvananthapuram, walked to the central railway station in the city to meet a friend of her on November 5, little did she know that it was going to be a special day in her life. Her interventions through social media on the day helped a retired school teacher who was found abandoned and begging outside the railway station to reach a safe shelter and to reunite with her old students.

It all happened when Vidya saw the old woman outside the railway station when she was waiting for her friend. “She was wearing unwashed clothes and looked mentally derailed,” Vidya told Outlook. “There were a couple of polythene bags with her containing water bottles and old pieces of clothes. I saw her plucking and eating small fruits from the nearest tree, so carefully as if she did not want a single leaf to fall down because of her.”

“Do you want food?” Vidya asked her.

“No.” the old woman replied.

However, Vidya went to the nearest restaurant and returned with idli and vada for her. Vidya found the woman’s body language brimming with propriety. Vidya asked her about her whereabouts. The woman patiently responded to her queries.

From the conversation, it turned out that the old woman was a retired teacher who worked for years at a school in Malappuram district in northern Kerala. Taken by surprise and disbelief, Vidya clicked her pictures and posted it on her Facebook account with a moving description about her encounter with the old woman.

“As I looked on, the teacher, carrying her old polythene bags, slowly disappeared into the crowd. I am not sure whether her version is fully true or not. But, one thing I am sure about is that she is not a mad woman on the street. She is, indeed, an educated woman! If what she said is true, I wish if someone from her Malappuram school recognizes her….” Vidya later posted on her Facebook.

The result was remarkable. The teacher’s old students recognized her and said they wanted to give shelter to her. An elated Vidya took herself to Facebook again and appealed for a united effort to find Valsa teacher again on the streets. The search began and after finding the teacher they took her to the Thambanoor police station. Later, a team led by sub collector Divya S. Iyer took her to the old age home, Sayahnam, run by Thiruvananthapuram Corporation. In the meantime, the teacher’s students started from Malappuram by the next train available to them. Speaking to Outlook, the sub collector said Sayahnam currently houses 15 inmates. “After receiving Valsa teacher, we got one more inmate,” she said.

Kerala has the highest number of old age people in India (13 per cent of the total population as per the 2011 census) and the sub collector said Thiruvananthapuram district has the highest number of cases under Maintenance and Welfare of Parents and Senior Citizens Act, 2007. “When I took charge, there were 1000 such cases pending in Thiruvananthapuram alone,” said the sub collector.

“Mostly such cases involve physical abuse of old age people, financial exploitation, abandoning and throwing them out from their homes etc. Several times, such situations are also used by siblings to settle scores with each other. In such cases, the old age people are often caught up in a conflict situation,” she explained, adding, “We have set up a special team and we hold adalats to settle such cases and to create awareness about the rights of old age people.”

According to the sub collector, Valsa Teacher’s appears to be a case of abandoning. We have found her sister and relatives. But, we are yet to find her son and husband,” she said, adding, “A suo moto case has been registered against her relatives and hearing in this will take place within a month.”

But, at the same time, she wants a good company. At one point she asked me in Malayalam, ‘Ennum koott undakumallo ille?’, means, Will I have your company every day?”

However, the teacher has so far refused to go with her students. She reasoned that she cannot go with men from outside and insisted that she will go only with her son or her husband. The sub collector says that the effort is on to find them. And the teacher is waiting.