The governments, both at the Centre and states, are sadly fighting the symptoms rather than the disease and while doing so are virtually killing the public education 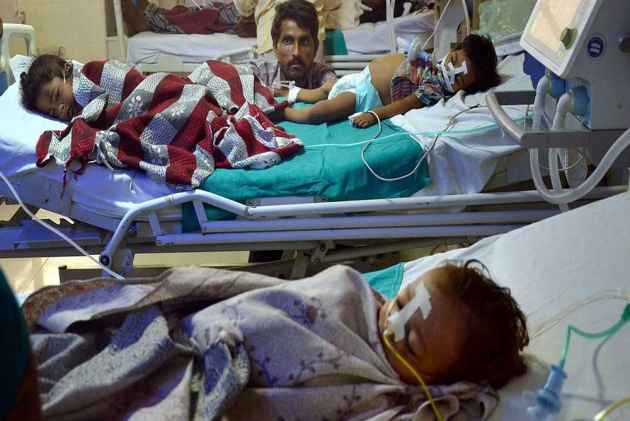 Social justice sans publicly funded robust education and health set ups in poverty and illiteracy stricken arena like Bihar and Uttar Pradesh can never succeed. This has shockingly been borne out by the continuing trail of deaths of children in a public hospital of Gorakhpur in eastern UP.

For over a month now scores of deaths of infants and other children in the unfortunate hospital that caters to Japanese encephalitis prone region has come to haunt the politics, leaders and people of the State.

As the Gorakhpur hospital affair gets murkier there are reports from further east in Jharkhand about children dying even in greater numbers than Gorakhpur and yet the main issue behind the deadly toll remains as obscure as ever though it is as simple as that no State inhabited by mostly poor people can afford to wash off its hands from public healthcare by encouraging and patronising private hospitals.

And so is the case with education in schools where the government cannot shrug off from its responsibility simply because private players have moved in to turn this mass utility service into a money minting business.

This in turn creates multiple standards, robs the system of its universality and restricts access on the basis of economic level and is so discriminatory as to shut doors upon the face of poor children who need the education most.

Privatisation of schools which is nowadays rampant all over the country, including the poorer provinces of the Indo-Gangetic basin and which has been on through past quarter-a-century or so has sown the seeds of privatisation of other services, including health.

Graduating from private schools to private medical colleges is a known story now. And doctors coming out from these colleges after paying huge sums in donation to get admission cannot be expected to be part of a system that offers free treatment and medicines to the needy deserving and poor patients who line up in huge numbers before public health facilities all the time.

The result is mushrooming of private hospitals and evils like unnecessary or overtreatment, plethora of pathological and radiological tests, including pre-natal sex determination tests and female foeticide.

Despite this the governments, both at the Centre and states, are sadly fighting the symptoms rather than the disease and while doing so are virtually killing the public education and healthcare systems that were in place and were catering to the needs of the people in a more universal way than what is the case now.

The tragedy of Gorakhpur’s Baba Raghav Das (BRD) Hospital signifies this starkly. The privatisation of the crucial services like health and education despite their mass use and consumption has not only staunchly been backed by successive Governments but also their use has been becoming nearly compulsory since Government schools and hospitals are virtually being annihilated by todays powers-that-be. Many of them have become a pale, or skeletal shadow of their past. And those ensuring this include Governments that rode to power vouching for social justice.

To understand this erosion of government-run schools better one has to look at this year’s results of Bihar School Education Board where 65% examinees could not pass the class XII examination and in case of X Class only 50% students could get through the Board exam despite being given grace marks. The commotion set off by this, courtesy media and Opposition parties died down with time and now it has again become business as usual. Corruption is back as the core issue in Bihar.

Chief minister Nitish Kumar has decided to flaunt his clean image as the public discourse in the impoverished State is once again pandering to power play rather than addressing a recent mass disaster in the field of education that is going to have an effect on a whole generation of youngmen and women for years to come.

The issues in the state are such that they are more leader-centric than having anything to do with the poor people of the state. Of late, the diametrically opposed Bharatiya Janata Party to social justice has been charmed by Nitish Kumar’s messiah-like attributes that are now geared up to fight demonic Lalu, Rabari and their evil progenies like Tejashwi and Misa.

The main players in this fierce battle are all from parties that swear with social justice and yet in last 25 years or so these were the very leaders under whose benign watch the education system of the State was badly eroded and is still going from bad to worse.

This phenomenon is not confined to Bihar alone as in neighbouring UP under similar leaderships of Mulayam, Mayawati and Akhilesh the public education and health system has been badly mauled. And the recent Gorakhpur incident palpably speaks of this though a few months ago the government has changed in the state.

The grim message that the death of scores of children at Gorakhpur has served is that the governments that rode to power in the name of social justice have greatly helped in rapidly destroying the health and education set ups of their States.

In case of education this was recently made clear by an article ‘Trends in Public Expenditure on Elementary Education in India’ by Ambrish Dongre and Avani Kapoor. Published by Mumbai-based Economic and Political Weekly the article highlights the disconcerting trend of cuts being effected in budgetary allocations for education, more so for elementary education, through the last 25 years.

The writers have presented data to show that the how the allocation for education has come down from 1.57 percent in 2011-12 to 1.38 percent of GDP in 2014-15. Similarly, a popular website called Indiaspend has revealed that there are 2.80 lakh vacant posts of teachers in Bihar’s primary schools. Bihar Government spends Rs 5,298 per student while the Himachal Pradesh Government coughs out Rs 39,343 a year on a student.

And when one looks back to find reasons behind the plight of schools and education in Bihar the sad fact that emerges is that former Chief Ministers Lalu Yadav and his wife Rabari Devi blamed their predecessor Jagganath Mishra for this. When Nitish took over, he followed suit by blaming Lalu and Rabari.

The fact is that none of them tried to stem the rot slowly and irrevocably setting into the system until it was so badly eroded and completely destroyed as proven by this year’s results of state education board examination.

Strangely, those who presided over such a tragedy invariably came to power brandishing social justice as a magic wand for empowering the historically poor and deprived castes, clans, tribes and minorities.

They include not only Lalu, Rabari and Nitish in Bihar but also Mualaym, Mayawati and Akhilesh in case of UP. All of them with perhaps the exception of Nitish and Akhilesh, who happen to be engineers by their training, must have entered Government schools only and also must have mostly knocked the doors of a public hospital for treatment in case of falling sick in the initial days of their lives to say the least.

Yet, when poor people catapulted them to power through their massive support, they unexceptionally speeded up the process of destroying public hospitals and schools to pave the way for their private counterfoils.

The result is that even poor parents struggle now to get their wards admitted to the so called convents that have a prefix like St, or Saint, to bring the images of missionary zeal when in real terms they are mostly owned by the Sinhas, the Tiwaris and other forward castes’ upwardly mobile class that smelled opportunity in the destruction of State-run education system, courtesy the new geniuses from backward caste leadership.

It was natural to expect a lot in the field of education from Nitish Kumar and Akhilesh Yadav since both are engineers but the two hugely disappointed the people. This is because of the lack of vision on their part.

Both turned out to be virtual enemies of their class since the two presided over the virtual decimation of health and education systems in their States. The rapid disintegration of these vital public services was preferred by backward class leaders because they end up in following and aping their upper or forward caste counterparts. Though Nitish recruited three lakh teachers but incompetence and lack of knowledge were the hallmarks of the recruits.

Nitish tried to justify this by resorting to the plea of a compulsion like generating and offering quick employment. Going by this argument the recruits should have been made watchmen and cooks at the most instead of being handed down with the future of unsuspecting and innocent schoolchildren.

Despite the rise in agricultural yield through past 25 years the backward leaders have miserably failed to channelise the gains made in the agro sector for the benefit of their poor voters by improving schools and hospitals and with improved education and health creating more job opportunities.

The net result of this is huge disappointment from the rise of backward leaderships in the proverbially Bimaru or sick Hindi, or cow belt of the country.

(The writer is Delhi-based journalist. Views are personal)