How Delhi holds within its embrace stories of Queer love that have transpired, and continue to do so, within the foundations of its five-thousand-year-old ruins. 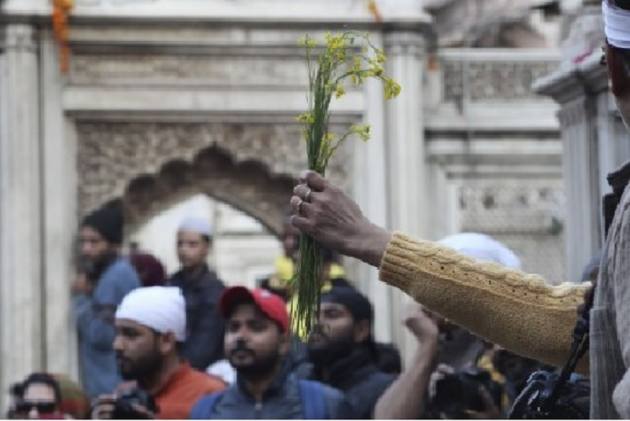 I was 16 when I first entered the dargah of Nizamuddin Auliya. I had no knowledge of its history, no understanding of the memories that live within its walls. All I knew was that qawwalis are performed on Thursday evenings. I went alone. I watched, overwhelmed, as a collective effervescence emerged around the crowd - a sense of solidarity - as performances inched towards their climaxes.

(I remember I was scolded by my parents for being out so late, for not picking up their calls; I remember lying to them about where I had gone.)

The show had culminated in "Aaj Rang Hai", the lyrics of which are still etched into my being. I learned that several performances at the shrine end with the song. That it is special.

"Why?", I thought to myself, as its words invoked a visceral reaction in me. They reverberated
within my bones, crescendos screaming to my soul. Qawwali often invokes such responses,
no?

This was, however, different. There was something more.

But what? What could it possibly be? In retrospect, it is rather obvious, really; of course it had to do with my Queerness.

On the cusp of spring, at the shrine of Nizamuddin Auliya, is celebrated Sufi Basant. Folks flock to the dargah dressed in yellow, adorned with mustard flowers and marigold, to celebrate the winter’s end. The festival commemorates the eternal bloom of love between the famous Sufi poet Amir Khusro and his equally famous disciple, Nizamuddin Auliya.

This Sufi Basant tradition takes root in a rather curious story.

It goes that on news of his nephew's death, Nizamuddin was deeply distraught, utterly inconsolable. He spent all his time next to the child's resting place. His disciples, including Khusro, tried everything to comfort their Khwaja, or master. Alas, in vain.

Then one day, Khusro chanced upon a procession of women. They were donned in gold, singing away to the beat of their dhols, dance-walking to a temple; it was Vasant Utsav. Struck with inspiration, Khusro had a bit of a eureka moment.

He quickly slipped into a ghagra-choli, covered his face with a dupatta, and decorated himself
with garlands of genda-phool and sarson. Heading, with extreme urgency, to where his
Mehboob-e-Ilahi was. And then he danced. He beat on his drum, sang ecstatically, and danced
for his love. Overwhelmed, Nizamuddin's grief dissipated, displaced with joy. He was instantly cured.

Khusro is said to have composed Aaj Rang Hai when he saw Nizamuddin the first time. As if under a spell, he glowed with ecstasy; bathed in Nizamuddin's colour. So that's why.

Throughout this period of pandemic-induced isolation, especially through the Pride Month that went by in June, I couldn’t help but recall how Delhi holds within its embrace several such stories of Queer love that have transpired, and continue to do so, within the foundations of its five-thousand-year-old ruins.

The sanctity of these monuments have been my shelter and served as spaces of Queer affirmation as well as rebellion for me. The Jinns who are said to live within some of these spaces, my kin -- beings connecting me to centuries past.

They are often painted as evildoers, beings to be feared, watched out for. Queers understand all too well what that feels like; to be hated as an invisible “other”, wrongdoer, spreader of malaise and misfortune. Our entire sense of self is shaped through this violence, our solidarities are built on this pain.

To walk into a space such as Feroz Shah Kotla, a 15th century fortress in Delhi, and see these beings who are otherwise ostracised... worshipped? It sets something off — joy bubbles up within me, moving through my chest straight to my heart. A comfort, a happiness like none other. 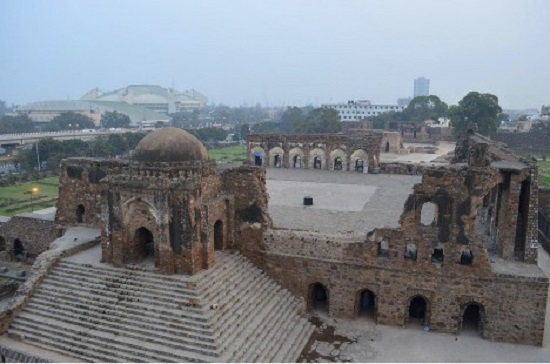 Feroz Shah Kotla. The stadium named after it can be seen in the backdrop -- Delhi, a city ‘disjointed in time’. Source: Wikimedia Commons

If you go to Feroz Shah Kotla during dusk, the first thing you will notice is the sharp smell of perfume in the air, followed by thick smoke as you descend into the monument’s interiors. The entire space is lit up with just candlelight, bouncing off the incense vapours and exuding an air of incredible mystery. An ethereal experience really.

And then — amidst half-melted candles, flowers and other offerings — you notice letters that people have written and left for Jinns asking them to grant their wishes. Ekdum top-to-bottom in sarkari format. Fully in accordance with dimension-transcending administrative requirements, complete with passport-sized photographs and laminated documents.

At night, the Jinns gather, going over the pleas, settling on which ones to grant, while rejecting forms not up to proper code. It is a bureaucracy not unlike the one that operates from the capital’s Raisina Hill, a few kilometres away. 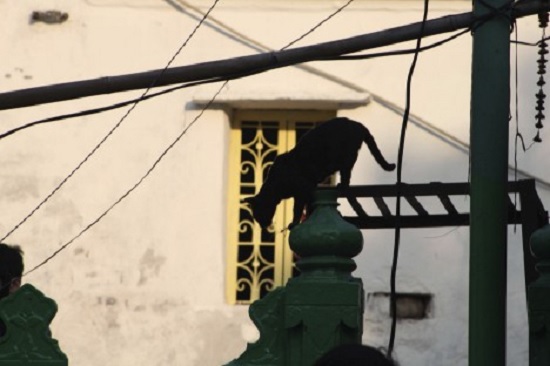 Delhi’s shrines and monuments, ones that have survived the Archaeological Survey of India’s willful neglect and, in some cases, even its tendencies of active demolition, remain the city's flesh and blood.

It is within the walls of these monuments that my Queer Little Gods live.

One such sanctuary is Jamali-Kamali complex, home to tombs of two lovers buried next to each other, not so far away from the famous Qutub complex but definitely not as well known as its more illustrious neighbour.

Scholars are certain who Jamali was — a famous Sufi poet — but a thick cloud of uncertainty distorts the identity of Kamali. There is speculation she was Jamali’s wife but the version we Queers prefer to go with is that Kamali was in fact a man, Jamali's lover. 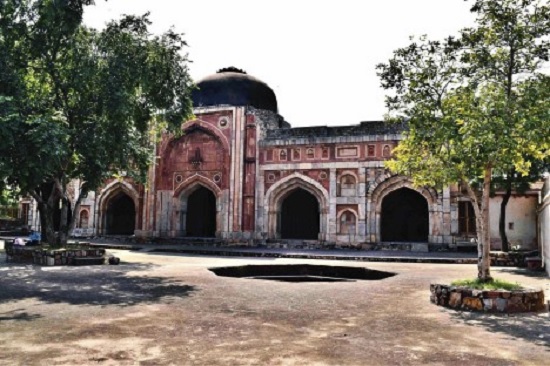 In Karen Chase's "Jamali-Kamali: A Tale of Passion in Mughal India", we hear Jamali's voice calling out to his love:

'In the plump dusk, I hear/ a peacock screech,/ eye marks on my lover’s neck. Kamali, let’s go/ to the lake/ to moisten our love scars.

I will wash mud from/ your muscled legs.

My secrets rest/ in the wedding/ hut. I visit another/ man as the moon/ circles down.

Come my protege,/ my Kamali, to bed./ I will show you/ moves of a new/ planet as no/ astrologer could.'

If you were to talk to a watchman around the Qutub Minar Complex, they will warn you, telling you of apparitions, of shadows. To be careful. 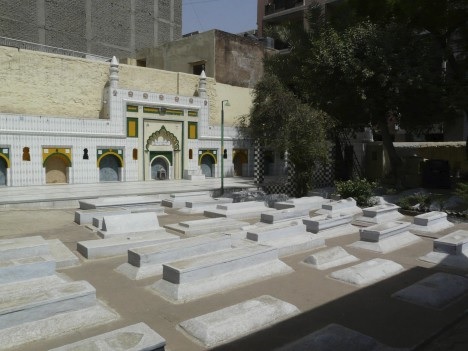 Yes. There are whispers that the two rise from their graves in the night. Shielded by the dark, protected from the prejudice that springs from India's neo-conservative and predatory morality, they dance to tunes of their passions.

Their affectionate whispers resound with the strength of a barbaric yawp in my ears. An exclamation of freedom. Theirs. Ours. My freedom.

Speaking of freedom... Some two kilometres away from Jamali Kamali, a 20-minute walk, there is yet another spiritual site. Hijron ka Khanqah, a 500-year-old dargah with approximately 50 hijra folk buried there. The monument is preserved and tended to by the hijras of Turkman Gate. The tombs are prayed to and it is believed those buried here have special powers; not so  different from the Jinns at Feroz Shah Kotla.

It is said the most prominent tomb here belongs to Miyan Saheb, the sister of a beloved Sufi saint from the Lodhi Era. On her death, the structure was built to commemorate her and her kin.

Over the years, it has become a sacred spot.

A safe, warm space where, even alone, you feel sheltered. Elsewhere I am rejected, but here among its walls, its marble tombs, its scents and consoling silences, for an ephemeral moment I am no longer shunned; my Queerness becomes a necessary as well as sufficient attribute for an invocation, a spell that calls on the Jinns.

But there is more to these monuments than stories. Come nighttime, several of these sites transform into spaces of Queer lust, Queer being; unavailability of a "place" for sex sees these ruins turn into cruising spots. A carnal fulfilment of want, transgressing heterosexual ideals of modesty and sexuality.

Yes, you read that right. When the sun goes down, we come prowling out from within the walls, congregating in our own little bureaucracies of desire. Judging which wishes to grant.

We haunt these monuments, we are their genius loci.

Every night we wrestle with Jinns, we are Jinns.

Without any hesitation, we exchange places with our Queer Little Gods. They occupy our flesh.

From within us, they speak.

These spaces within an unfriendly city are where my anger is temporarily subdued, in respect and homage, rather than a lack of hope. These spaces where Jinns roam and talk to me about the centuries past.

It is finally now that I am starting to talk back to them.

(Ateen Das is a student of Economics at Kirori Mal College, University of Delhi)