How India Is Bidding Adieu To Non-Alignment

Modi in a short eight months has given a new direction to Indian foreign policy. 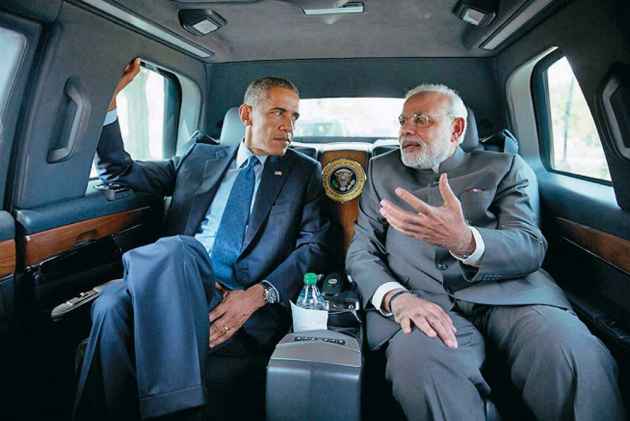 The US president's visit to India in January as the chief guest at the Republic Day celebrations has imparted a new sense of dynamism to a relationship that was seemingly drifting in recent years. A weak government in Delhi coupled with Washington's lack of interest in India ensured that the two nations continued to talk past the other. The possibilities engendered by the civilian nuclear agreement, announced in 2005 and concluded in 2008, were a thing past with the bilateral relationship becoming a victim of recriminations and unfulfilled expectations.

Today the relationship stands on the threshold of new possibilities, and much of the credit for this remarkable turnaround should go to India's Prime Minister Narendra Modi, who in a short eight months has given a new direction to Indian foreign policy.

For a leader viewed as provincial before elections, Modi has shown great diplomatic agility. The sheer audacity with which he seems to challenge the foreign policy shibboleths of the past is striking. The non-alignment ideologues in India stand confounded by the prime minister's diplomatic successes. For years, the nation has been told that the only way the foreign policy establishment can secure Indian interests is by working within the rubric of non-alignment. Even a recent template on how Delhi should conduct its foreign and security policy by some of the best and the brightest in the Indian foreign policy establishment was termed "Non-Alignment 2.0."

But today Indian foreign policy is being shaped by a government not trapped in the rhetoric of the past, busily engaging major global powers with a confidence not seen in previous administrations. Defensiveness of the past is now replaced by an explicit acknowledgment of convergence with key partners including the US. Though Modi was denied a US visa in 2005, his government boldly reached out to Washington after coming to power. He recognized that the challenges India faces with a domestically fragile Pakistan, political uncertainty in Afghanistan, instability around India's periphery and an ever-more assertive China cannot be managed without a productive US-India relationship, and Modi lost no time in reaching out to Washington, agreeing on a September 2014 bilateral summit meeting with President Barack Obama in Washington. Modi showed his trademark decisiveness in attempting to mend Indo-US ties, which had tapered off under his predecessor, and underscored the significance of the United States in Indian foreign-policy priorities. Modi cemented his reputation as a leader not only willing to stand up for Indian interests but also ready to find ways to move forward with others after signing a pact on the sidelines of the East Asia Summit in Nay Pyi Daw in November, reassuring the United States that India was not opposed to World Trade Organization's nearly-completed Trade Facilitation Agreement (TFA).

The prime minister followed this with a surprising move when he invited Obama to the 2015 Republic Day celebrations – an invite traditionally viewed as a celebration of India's closest diplomatic partnerships. Obama's visit to India saw the two leaders trying to sort out issues ranging from the nuclear deal to defense cooperation. The nuclear deal had been held up for six years amid concerns over the liability for any nuclear accident.

A great leap forward was made after Obama used his executive powers to roll back the condition that US authorities be allowed to monitor use of nuclear material purchased by India even from third countries, and the US agreed to India's proposal to build a risk-management insurance pool with a liability cap of 15 billion rupees, or US$244 million, to provide cover to suppliers who shunned the civil nuclear agreement over liability in the event of a nuclear accident.

Bilateral defence cooperation was also energized with the two states agreeing to extend the Defense Cooperation Agreement for another 10 years, expanding its scope by declaring partnerships on issues including "technology transfers, trade, research, co-production and co-development." Modi's arrival in office gave new momentum to the India-US Defense Trade and Technology Initiative (DTTI), originally launched in 2012, to promote technological collaboration and co-development of critical defense systems ranging from anti-tank missiles to launch systems for aircraft carriers. There is an attempt underway to make the DTTI more operational and result-oriented. Since its institutionalization in 2012, no major projects emerged, but now scheduling has begun. This is a major step forward and also ambitious, with talk of working groups on aircraft-carrier and jet-engine technologies.

Apart from the US, the Modi government is trying to increase its scope for diplomatic maneuvering vis-à-vis China by building substantive ties with states like Japan, Vietnam and Australia. This week Modi is visiting Indian Ocean island nations – the Seychelles, Mauritius and Sri Lanka – offering military and civilian assistance and shoring up India's credibility as a net security provider in a region where China's dominance has become significant in the last few years.

At a time when the US-India relationship is being viewed through the prism of strategic changes in the larger Asia-Pacific and Indian Ocean region, it's striking how marginal Pakistan has become in the relationship. The nation was not mentioned during the joint press conference of Modi and Obama. In their joint statement, the two leaders merely reiterated their call for Pakistan to bring the perpetrators of the 2008 terrorist attack in Mumbai to justice even as they reaffirmed the need for joint and concerted efforts to disrupt entities such as Lashkar-e-Tayyiba, Jaish-e-Mohammad, D Company and the Haqqani network.

There is growing nervousness in Pakistan about the changing US role in South Asia. Islamabad has moved quickly to reinforce its all-weather partnership with Beijing, and Chinese President Xi Jinping is likely to visit Pakistan sometime this year in what will be the first trip by a Chinese head of state to the western neighbor in nine years. Chinese officials have also now confirmed that Beijing is involved in at least six nuclear power projects in Pakistan and is likely to export more to the country. Taking aim at Obama's robust support for India's permanent membership of the UN Security Council, China and Pakistan have underlined that any change in the 15-member body should be achieved through "consensus."

Underscoring its desire to play a more active role in South Asia, China has offered in recent months to mediate in stalled efforts to engage the Afghan Taliban in peace negotiations. Though there are tensions in the Sino-Pak bilateral relationship, especially pertaining to the presence in Pakistan of the East Turkestan Islamic Movement, founded by separatists from the Uighur ethnic minority native to the western Chinese region of Xinjiang, both sides have an interest in maintaining a viable partnership, especially as US-India ties take an orbital leap. Pakistan is also reaching out to new actors like Russia from which it hopes to buy three dozen Mi-35 helicopters. With trouble in Russia's ties with the West and Moscow losing its privileged position in the Indian defense policy, new equations in South Asia won't be too surprising.

Under the Modi government, India charts new territory in its foreign policy, predicated on the belief that rather than proclaiming non-alignment as an end in itself, India needs deeper engagement with friends and partners to develop leverage in dealings with adversaries and competitors. The implications are already being felt in the region and beyond as India's interlocutors try to configure responses to New Delhi's proactive diplomatic maneuvering.

Rights:Copyright © 2015 YaleGlobal and the MacMillan Center at Yale