'How Is Dissent & Criticism Of The Govt's Policy "Spreading Hatred"?'

Ambedkar-Periyar Study circle writes to the Dean and Director of IIT-Madras. 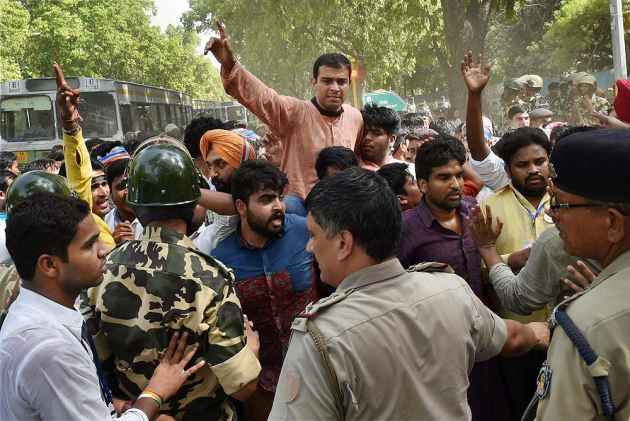 We the students of Ambedkar-Periyar Study circle are writing you regarding our stand on the recent email that we received from the Dean of Students, de-recognized our students' organization.

We resent the fact that the Dean has de-recognized our study circle unilaterally without giving us a fair hearing and an opportunity to represent ourselves. In our face to face interaction with the Dean of Students, we have been told that our study circle engages in "controversial activities" and violated the code of conduct of independent student bodies. We are clear on the stand that we have not misuse any privileges given by the institute. So far our activities are engaged with the healthy discussion on socio-economic issues on scientific basis to promote the scientific temper among the student which is allowed by the Indian constitution. We have not been given a satisfactory definition of what entails "controversial". Further, we were asked to give assurances that we shall desist from such activities in the future before the Dean (Students) can allow us to restart our activities. We have also been asked to route all our activities through the Dean's office rather than the usual practice of routing all our discussions, plan of activities and pamphlets through our faculty adviser. This excessive scrutiny is unprecedented and does not apply to any other students' organization. Vis-à-vis this move of DoS clearly shows, only opinions put forth by the right wing group will get the consent to see the light of the day, while the voices and opinion of the democratic students like us will be curtailed hereafter. Since DoS chaired this position, two times he warned us to change the name "Ambedkar-Periyar" stating that it is polarizing the student. This shows the aversion of DoS towards the the name "Ambedkar-Periyar."

The Dean's office has provided us with a copy of a letter from the MHRD dated 21/05/2015with the ref no. F. No. 5-3/2014-TS-I. The letter stated that the MHRD has received serious complaints regarding the activities of our study circle through anonymous letter. A copy of one such letter was provided. We wish to respond to the allegations in the complainant's letter.

Our discussions, meetings and pamphlets are meant to kick start a discussion within the campus among the academic fraternity. The issues that we discuss are very important and define the way we live our lives. IITM is a public funded higher education institute, whose vision and mission should abide for the upliftment of the common mass, who are the taxpayers. Rather, the move from DoS, IITM says there is no space for such opinions and discussions. We would also like to know what exactly constitutes the "misuse of privileges" and how the specific issues raised in the complainant's letter could be deemed controversial? The right of function of any independent student body is not the 'privilege' given by the authority, rather it's the democratic right of student themselves.

We strongly believe that what we stated in our pamphlets and content of our discussion is correct and as per the Constitution. Therefore, action against the Ambedkar-Periyar Study Circle by the DoS, IITM is undemocratic and unilateral against the interest of common mass for whom the Institute itself is indebted; hence we are not accepting this decision taken by the Institute.

The letter has been reproduced verbatim without any editorial changes.